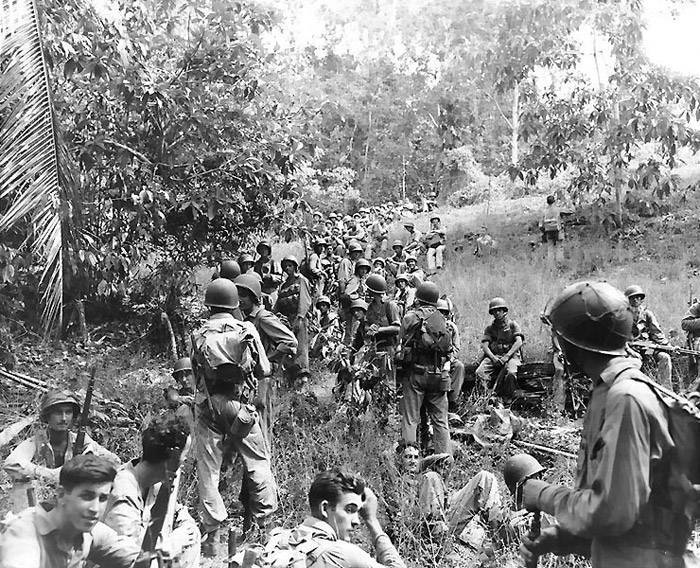 The army of the “great and mighty” Pindostana has, from its very inception, been pleased with its imaginary victories not only the leadership of the country but the rest of the world. “Inglorious bastards” more than once found themselves in the center of attention of the world community, the media and military historians thanks to the inimitable ability to lose even with absolute superiority in manpower and technology.

“The forces are equal - we run”, this is not just a quote from “Star Wars”, it is spelled out in the charter of the US Armed Forces. I will remind only a few moments of “glorious combat stories”Troops“ great ”USkali:

Opening a second front in 1944. It shocked the Soviet command and the whole world with the unprecedented scale of the landing operation and the equally incompetent incompetence of the army leadership. Having landed, the Anglo - American troops, walking, leading the "hard" battles began slowly and reluctantly to close the Nazis, managing to lose a lot of military equipment and people, literally, overwhelming the Germans with corpses. This is despite the fact that the auxiliary troops of the Wehrmacht, that is, the rear men and convicts, the elderly and practically children, opposed the “valiant” brazenly-Americans. All combat-capable divisions of the Wehrmacht fought on the Eastern Front.

And then the Ardennes crisis “suddenly happened”, i.e. German offensive, which almost led to the complete defeat of the troops of the "valiant" allies. As a matter of fact, the Germans did not plan an offensive, it was all right. In reality, there was a retreat, or rather, an American force supported by the British. And it was caused by the speech of Hitler, in which he unambiguously and honestly promised to “hang all the blacks” taken prisoner.

“Brave” American monkeys unanimously rushed into a race to sow panic and chaos among their pale-minded brothers in mind, who quickly realized that the Germans who were not burdened with prejudices could at the same time use them. The front fell apart in three days. And the offensive of the Soviet troops, just begun at the request of Churchill and Roosevelt two weeks earlier, saved the Anglo-Pindos from a complete and crushing defeat ...

Kiska Island was under Japanese occupation since the summer of 1942, when Japanese marines landed on the island and destroyed the meteorological station of the US Navy. Subsequently, a significant garrison was stationed on the island, which according to US intelligence was about 10 000 people.

In the area of ​​the island of Adak was concentrated more 100 ships, the assault forces comprised 29 000 US Cannons and 5 500. In addition, since the end of July, Kiska has been subjected to air raids and shelling from the sea. 13 August 1943, a training landing on Adak was made. The operation was scheduled for August 15. The operation took place with 15 to 24 August 1943 g. As a result, the island was captured.

And now attention, the most important thing.The Japanese command, conscious of the impossibility to defend a practically isolated island, decided to evacuate the garrison. July 28 (!), two weeks before the Americans landed (!!), whole garrison in the number of 5183 people within an hour plunged on 2 cruisers and 6 destroyers and, under the cover of fog, was evacuated to Paramushir.

With whom the Americans fought with terrible losses, history, and the Americans themselves prefer not to speak. I think it’s absolutely clear now why the Americans ’plans for 1945 for the year included at least five year war with japan, with the “planned level of casualties” being set at one million American soldiers per year.

The Soviet command destroyed the insidious plans of the American warriors completely defeating the Kwantung Army in less than two weeks, which saved the millions of American and Japanese soldiers and at the same time deprived American military concerns of super-profits. In impotent rage, the "lights" of democracy dropped two atomic bombs on peaceful Japanese cities without any military necessity.

... Those who remember the invasion of Americans in Vietnam are still alive. Despite the aspiration of the three American presidents to “establish democracy in Vietnam at any cost, even if it would have to destroy all Vietnamese”, the more than half a million army of American thugs could not cope with a tenfold weaker opponent, practically unarmed and without experience in hostilities. The Vietnamese in abundance had only one thing - hatred of the invaders.

Time does not stand still, and here the Americans once again sharpen a tooth on Iran. The seizure of the American Embassy caused the wrath of Faschistgton. For salvation American spy diplomats were thrown a super-duper special forces, which not only managed to get lost, but also lose helicopters and weapons. I had to save the rescuers ... After some time, the diplomats were returned, almost intact, but this was already the path of diplomatic negotiations to which the Americans had to go under pressure from the main calibers fleet THE USSR.

The Soviet government, represented by grandfather Brezhnev, was hinting enough that the “escalation of military tensions” in the region directly bordering the USSR was “extremely undesirable” ... The entire super invincible aircraft carrier missile fleet of the country of evergreen democracy turned tail off the coast of Iran.

By the way, the destruction of Ben Laden’s d and n o u ruschego again played a cruel joke with the Americans, the destruction of futile people required four years of “observation,” two months of intensive preparation. As a result of the “carefully” prepared and carried out operation, the Khamerikantsy managed to lose the helicopter and kill the family of a high-ranking Pakistani officer and himself — instead of Bin Laden ...

The attempt to buy the silence of the Pakistani authorities was only partially successful, Pakistan remains silent about the true identity of the officer killed by the Americans, but took a tough stance towards the recent “strategic” partner, for it is well aware that the next in line after the mythical Bin Laden may be the leaders of Pakistan .

About the Yankees in Libya, you can write a lot, but is it worth it?

Ctrl Enter
Noticed oshЫbku Highlight text and press. Ctrl + Enter
We are
Volunteer and semi-private patriotic formations of Ukraine.Why did Kazakhstan set up a military "defile"?
35 comments
Information
Dear reader, to leave comments on the publication, you must to register.