November 1 - the day of the suicide of the Ukrainian economy? 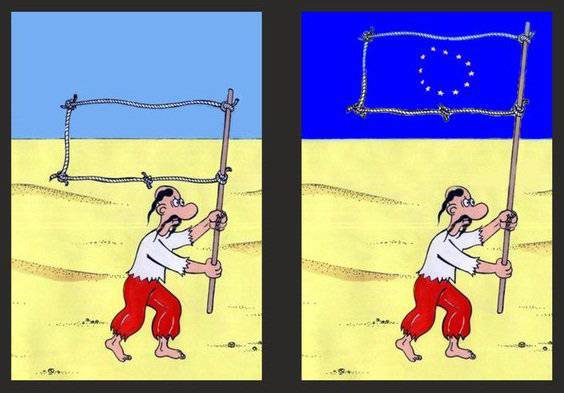 Finally, the situation regarding the Ukrainian-European Association Agreement was finally clarified. In an interview with “1 + 1”, Petro Poroshenko clearly stated that “After ratification, the Agreement enters into force - from November 1 in full ... No exceptions, no delays. None of this will be. As a result of negotiations in Brussels, we have the right to protect our market. It was a gesture of our European partners. ”

However, it is difficult to call this solution a surprise. He made a similar statement during a press conference with European Commission President Jose Manuel Barroso back in September. Then Poroshenko said that “From November 1, 2014 this agreement will enter into force. I think it will be historical afternoon for Ukraine and the EU. Prior to this, I hope that bills on combating corruption, in particular on the Anti-Corruption Bureau, will be adopted. "

The most interesting thing in a recent statement by the Ukrainian president is not that the Agreement will enter into force on November 1, but that it will enter into force in full. Full volume means that a free trade zone between Ukraine and the EU will start operating from 1 in November. But more recently, the implementation of the agreement on the creation of a free trade zone was postponed until January 1, 2016. This decision was made on the basis of agreements between Ukraine, the European Union and Russia. And then it suddenly became clear that these agreements were severed by Kiev and “no delay, nothing will happen.”

It is difficult to understand why such a sharp reversal of the previously agreed position occurred. It can be assumed that against the background of unyielding Yatsenyuk, with its tough anti-Russian rhetoric and sudden success in parliamentary elections (which evil languages ​​attribute to the efforts of the American embassy), Poroshenko fears to look too pro-Russian. At present, this is fraught with negative consequences for any political career. Perhaps this is where the desire of the Ukrainian president to look no less anti-Russian than in this sense looks like the Ukrainian prime minister.

In a word - to be a free trade zone with the EU!

What are the possible consequences of this, as the President said, of the “historical day for Ukraine and the EU”?

It is no secret that Russia prepared for this “historical day” in advance. September 19 Russian Prime Minister Dmitry Medvedev signed a document on the introduction of customs duties on Ukrainian goods. However, its entry into force was to occur only after Ukraine began to apply the economic articles of the Association Agreement with the EU. Initially it was assumed that this would happen no earlier than 1 in January 2016. But now it becomes clear that the Russian market will close for Ukraine already 1 November 2014 of the year.

In this regard, Moscow, through the press secretary of the Russian president, said that “Russia proceeds from the agreements that were reached at the trilateral negotiations, while maintaining its position. Russia is committed to these agreements, but is ready to take retaliatory measures if this (the full entry into force of the agreement) occurs in violation of previously reached agreements. ”

The “retaliatory measures” mentioned are fees for 144 types of Ukrainian goods.

The logic of Moscow is extremely simple. The free trade zone with the EU provides for the introduction of EU trade policy rules on the territory of Ukraine. This means that Kiev, in particular, will have to open its internal market for European goods. As a result, uncompetitive Ukrainian goods, together with European (under the guise of Ukrainian), will flood the Russian domestic market, bypassing the existing customs regulations and prohibitions. To prevent this from happening, Moscow will automatically begin to defend itself by increasing customs requirements for imports and imposing duties.

“Due to Ukraine’s zeroing of duties on imports from the EU, obviously, there will be a significant increase in the supply of European goods to the Ukrainian market. We understand our European partners, who actually and now have already mastered the Ukrainian market. They want to get everything that is still there, and push out all the rest. And, moreover, less competitive Ukrainian products will be crowded out from the Ukrainian market itself. Where? First of all to Russia. And to other countries of the Customs Union, but above all to us. The risk of illegal re-export of products of the EU countries under the guise of Ukrainian goods to the market of the Customs Union cannot be disregarded either. ”- said the President of the Russian Federation.

In this situation, Russia "can not be inactive," Putin added. According to him, Moscow will be forced to take retaliatory measures in order to protect its market - to introduce a standard trade regime for Ukraine, that is, to increase duties and strengthen customs inspection.

It can be assumed that Petro Poroshenko decided to lose the Russian market due to the fact that the European Union made him an extremely tempting offer that could compensate for trade and financial losses due to the refusal of duty-free trade with the Russian Federation and the CU countries.

Obviously, this is precisely why the Ukrainian president declared that he decided to break the previously reached agreements because “We got access to the European market and kept our positions. The text of the agreement without a single drop of changes signed and enters into force. "

And this is probably the most mysterious thing that the Ukrainian president could say. After all, it is completely incomprehensible how Ukraine could “maintain its position” without “a single drop of changes” in the text of the Agreement. It is no secret that it is the very standard Association Agreement with the EU that is extremely disadvantageous for Ukraine. And so that our country can protect its domestic market and smooth out financial losses, it is necessary to make changes in it, adapting it to Ukrainian realities and interests.

But, as the President proudly stated, not a single drop of changes was made to the text of the Agreement.

In general, it turns out that Ukraine inevitably loses the Russian market, and the European market will not open for it soon. If ever it opens.

The fact is that only a few dozen Ukrainian exporters of raw materials and semi-finished products are ready for the requirements and standards of the European market. The rest will have to receive certificates and licenses confirming the compliance of their products with European standards. Obtaining such certificates is a very long process, and for most Ukrainian enterprises it is impossible. First of all, this is due to the fact that the production of goods according to European standards involves a radical restructuring and modernization of production under European standards. And this requires hundreds of billions of euros of investment throughout Ukraine.

It is clear that no one promises this investment. And Ukraine itself has no funds even for the current servicing of foreign debt. In fact, the country is bankrupt.

In addition, the situation is complicated by the fact that in Ukraine it will be difficult to sell goods that do not meet European standards. Therefore, the majority of Ukrainian manufacturers will lose not only the Russian market, but also their own domestic. Their products should be "substandard" with November 1. Moreover, other traditional Ukrainian markets of foreign markets are a big question from 1 November. Indeed, after the introduction of the Association Agreement, every foreign buyer has the right to demand from any Ukrainian exporter a certificate of the European standard for the products they sell. And now there are a lot of Ukrainian companies that are ready to produce such a certificate?

In general, 1 in November can be a fatal line, overcoming which the remnants of the Ukrainian economy will sink into oblivion. But what can not be done for the sake of association with the EU.