In the United States developed a sight with "adaptive optics"

October 30 2014
25
Arrows-snipers and hunters in some cases need a sight with variable magnification and focal length. In modern sights with such a function, the focal length is adjusted by changing the relative position of several lenses. With all the advantages, such a system is not without drawbacks: first of all, a relatively low speed of reconfiguration. American engineers have developed and tested the original optical sight system with the shortest possible multiplicity change time.

The National Laboratory in Sandia presented its new development - the RAZAR optical sight (Rapid Adaptive Zoom for Assault Rifles - “High-speed adaptive zoom for assault rifles”). In an official press release of the organization, it is stated that the use of the original idea underlying the new sight, significantly reduced the time for changing the magnification of the image in the eyepiece. In addition, the new RAZAR sight has a simple and intuitive control system that provides high usability. weapons and sighting devices.

The RAZAR rifle shown by American specialists is an optical instrument with a control system that complements other aiming devices. In all the presented photo and video materials, the RAZAR system is used as a magnifying “attachment” for other sights. Probably, such a prototype architecture was chosen to simplify it and in the future full-fledged sights with an innovative multiplicity change system, aiming grid, etc. may appear.

The RAZAR sight has an extremely simple appearance: smooth cylindrical, with both ends of which have lenses, as well as a small cylindrical block in its lower part. At sight there is a mount for installation on a standard Picatinny rail in front of another sight. From the body of the RAZAR sight comes the wire connecting it to the control panel. The latter can also be mounted on the Picatinny rail and has two buttons to control the multiplicity.

Convenience of operation and speed of adjustment, allegedly, are provided with a separate control panel. The demonstration video shows that the console can be installed on the side surface of the forearm of the base weapon, under the arrow fingers. Thus, to adjust the RAZAR sight, the shooter must not take his hands off the weapon. It is expected that this will speed up aiming, including when shooting at targets at different ranges.

Of greatest interest is the optical system used in the sight RAZAR. Its development was launched in the 2006 year, but only now the project has reached the creation and testing of an experimental prototype, which is limited to use in real conditions. Such a long period of work on the new scope due to the complexity of its design. Instead of the "traditional" glass or plastic lenses, it was decided to use the so-called. adaptive optics of complex construction.

Unlike traditional optical sights or other optical instruments with variable magnification, the new RAZAR sight has no moving lenses. Instead, the system uses the original design. The new sight is based on a set of glass and polymer lenses. The latter are two flexible membranes inside the rings, between which there is a clear liquid. At the command of the control system, a small-sized ultrasonic piezoelectric engine, acting on the ring-holder, changes the shape of the membrane. Both membranes bend and change the characteristics of the entire optical system. Thus, the principle of operation of optics, created in accordance with the concept of Adaptive Zoom, is similar to the way the lens of the eye works. 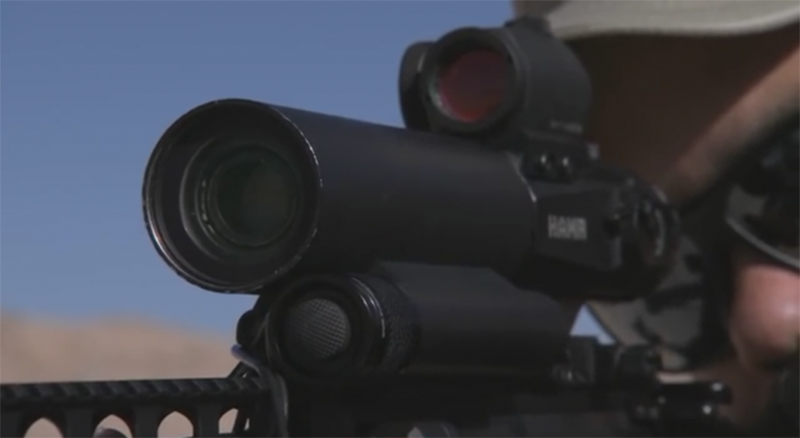 It is argued that the used ultrasonic drive provides a change in the distance between the centers of the membranes with an accuracy of 100 nm. The change in the characteristics of the lens takes about a quarter of a second. The authors of the project RAZAR note the efficiency of the used engine. Two AA batteries, from which the sight is powered, should be enough for 10 thousandth multiplicity adjustment cycles.

When creating the new RAZAR sight, the staff of the national laboratory in Sandia had to solve several serious problems. Home - the purity of the fluid injected between the flexible membranes. It must be free from any impurities and must not contain air bubbles. Otherwise, adaptive optics will not work properly, and will not provide the required ease of use.

Another serious problem was the power consumption of the sight drives. After lengthy work involving commercial organizations, a piezoelectric motor with acceptable characteristics was selected. According to official data, the shooter will be able to 10 thousands of times to change the multiplicity of the sight, without replacing the batteries. An interesting feature of the RAZAR sight is energy consumption only at the moment of changing the curvature of the membrane-lenses. After adjustment, the state of the optical system is maintained even when the power is turned off.

The first prototype of the sight based on the optics of the Adaptive Zoom system was created in 2010, and two years later it was shown to the military. RAZAR project manager Brett Baguell notes that the new sight has interested the military. The instant zoom in the eyepiece surprised and delighted the servicemen, who were allowed to test this scope. The testers recognized that the ability to quickly restructure the scope for firing at a different range could change the nature of the battle.

At the time of demonstration of prototypes of the sight based on the Adaptive Zoom, the staff of the National Laboratory began to improve the characteristics of the sight and bring them in line with the requirements of shooters and military. The presented RAZAR sight is protected from moisture and dust, withstands shocks, vibration and recoil of the weapon. In addition, it can be used in a relatively wide range of air temperatures. According to these parameters, the sight conforms to the standard MIL-STD-810G.

Now employees of the National Laboratory in Sandia, headed by B. Baguell, are working to improve the RAZAR system, as well as create new optical devices based on adaptive optics. The priority project is a night sight based on flexible polymer lenses. A prototype of this system has been manufactured and is being tested. In the future, it will be refined for use on small arms or, possibly, in night vision devices. 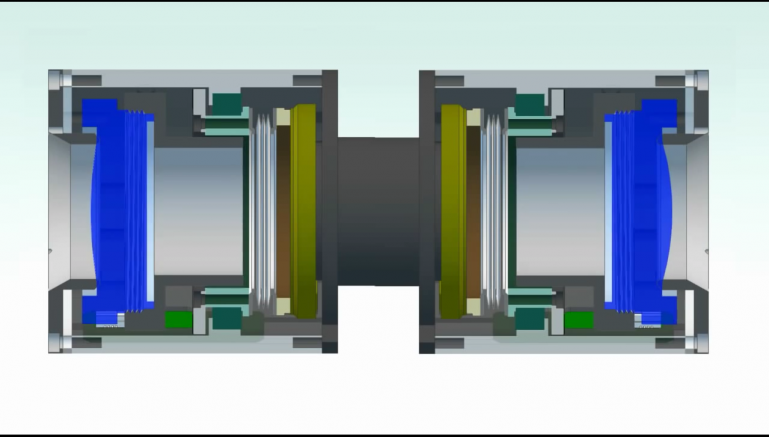 The proposed system of adaptive optics has great prospects and can be used in various fields of instrument-making, in need of optical devices with variable magnification. First of all, these are photo and video equipment of various classes. In the future, you may receive mobile phones and smartphones with a similar zoom and other electronics.

The RAZAR sight itself is of some interest both for army shooters and for hunters. In both cases, the ability to quickly change the multiplicity will significantly improve the speed of aiming and thereby significantly improve the efficiency of fire. However, Adaptive Zoom-based hardware is quite expensive. The high price can seriously limit the commercial prospects of a RAZAR sight and similar devices. Despite this, the new sight with adaptive optics is interesting as the first device in its class, built on the basis of flexible lenses and brought to the stage of field testing.