The concept of development of ekranoplans is proposed.

October 30 2014
116
October 24 in Moscow, a meeting of the Expert Council under the State Duma Committee on Industry. Defense industry experts and lawmakers discussed a number of issues related to promising vehicles - ekranoplans. Representatives of the Military Industrial Commission, the Ministry of Defense, the Ministry of Transport, the Ministry of Industry and Trade, the United Shipbuilding and the United Aircraft Building Corporation, as well as experts from other organizations and departments were involved in the discussion of the issue. 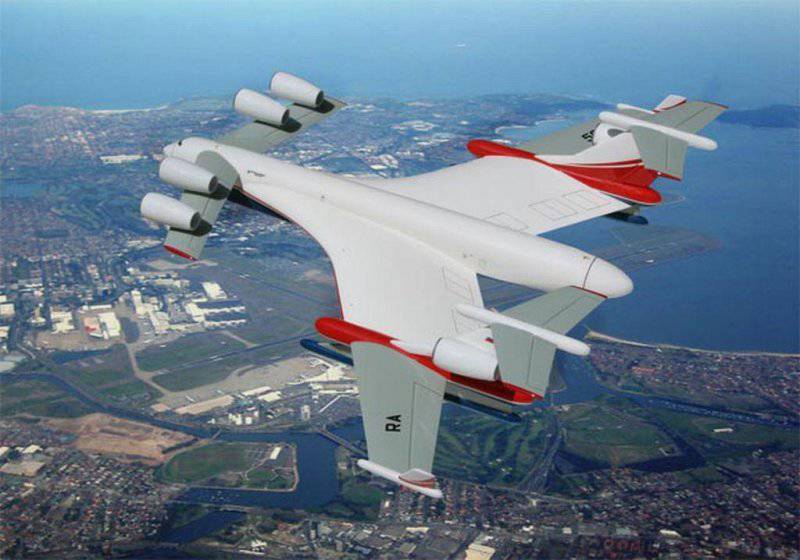 State Duma Deputy, First Deputy Chairman of the Industry Committee Vladimir Gutenev, opening the meeting, stressed the importance of the development of transport. Due to the large size of the state and the unsatisfactory state of the transport infrastructure, the development of promising types of transport is important for the development of remote regions: the Arctic, the Far East and Siberia. In addition, the issue of communication with the Crimea requires solving. The deputy noted that a large part of the scientific and experimental base necessary for the development and construction of new ekranoplans has survived to the present. At the same time, however, this base remained unclaimed for several decades.

According to V. Gutenev, the Ministry of Industry and Trade has taken into account the prospects of new vehicles and has developed a draft Concept for the development of civil and military EKR planes, as well as an action plan for its implementation. The draft Concept and its implementation plan has been submitted to the Russian government, which should approve them. The development of new documents should contribute to the commencement of systematic work in the field of ekranoplan construction, combine the efforts of various enterprises, and also attract private investors.

During the meeting of the Expert Council, the representative of the Federal State Unitary Enterprise "Krylov State Research Center" Sergey Ganin revealed some details of the proposed VND Development Concept. It carries out a forecast of the development of the WIG market in the country before the 2020 year, determines their optimal appearance for solving various transport tasks, and also proposes measures of state support for projects aimed at improving production efficiency and improving the competitiveness of finished equipment.

Currently, the world is increasing interest in ekranoplans, which are considered as a promising vehicle that can occupy its niche in commercial freight traffic. One consequence of this interest was the emergence of a corresponding regulatory framework. The United States, China, Japan and other countries are particularly active in this area. In addition, the development and construction of new ekranoplans. For example, South Korea is currently conducting tests of the WSH-500 ground effect vehicle capable of carrying up to 50 passengers. At the moment, this machine, which will soon be put into the series, is the largest representative of its class in the world.

In Russia, the production of WIG is in extremely modest amounts. Vladimir Sokolyansky, head of the TsAGI Moscow complex, believes that the development of domestic ekranoplans is hampered by the lack of the necessary legal framework for the construction and use of such equipment, the rapid aging of existing developments and the strengthening of the position of competitors from foreign countries. In addition, this technique is hindered by a lag in some technical areas, a specific inter-sectoral status and the lack of funding for topics in the framework of aircraft development.

Specialists who participated in the meeting of the Expert Council under the State Duma Committee on Industry, came to the conclusion that it was necessary to create an industrial complex, the task of which would be the development and production of new ekranoplans. It is necessary to form a new industry. Ekranoplanostroeniya should be a specialized, innovative and high-tech industry. When creating a new technology, it is necessary to take into account the economic and military security of the country, as well as to develop with the active support of the state.

It should be noted, the new industry, ekranoplanostroenie, will not be created from scratch. A few decades ago, some developments in the field of this technology were created in our country. In addition, currently several commercial organizations are engaged in the construction of ekranoplans and have achieved some success.

In early October, it became known that in Yakutia, the first prototype of the Burevestnik-24 ground-effect vehicle, made by Sky and Sea LLC, was put into trial operation. This unit is capable of carrying up to 24 passengers with luggage. During testing and trial operation, flights from Yakutsk to Best, Pokrovsk and Sinsk were made and continue to be performed. The Lena River became the “route” for WIG flights. The ekranoplan "Burevestnik-24" will be in trial operation until the spring of next year, when it is expected to begin full-fledged commercial flights. In addition, the construction of the second unit “Burevestnik-24” is being completed, and the authors of the project are working on a new ekranoplane capable of carrying up to a hundred people.

The Petrozavodsk Center for ekranoplanostroeniya, created in the areas of the Avangard shipyard, a few days ago told about the progress of foreign orders. Thus, the construction of ekranoplans for Iran continues. Two Orion-20 machines have already been tested and sent to the customer, the third is being tested. Three more machines of this type are located at different stages of production in the workshops of the EKD center. Various foreign customers, including those from China, show their interest in the development of Petrozavodsk engineers.

Ekranoplans are of particular interest from the point of view of modernization of the transport infrastructure and are able to find their niche in the structure of the transport of goods and passengers. However, this technique cannot yet compete with the existing traditional vehicles. For a full-fledged exit of ekranoplans on routes, it is required to develop the industry and some related directions. Specialists of the Ministry of Industry and Trade have developed a program in accordance with which the development of ekranoplanostroeniya. If the proposed Development Concept is approved by the government, its first results may appear in the next few years.