What are the prospects for DNR and LC?

October 29 2014
39
At the moment, "Novorossiya" is nothing more than an idea, a dream of a part of Ukrainian society, tired of the endless misfortunes and problems of Ukraine. But at the same time, no one knows what “New Russia” is. Similarly, no one really knows what the prospects are even for formally existing DNR and LC. It is difficult to name them states. At the moment they are nothing more than rebellious territories, most of whose population does not want to live in Ukraine. 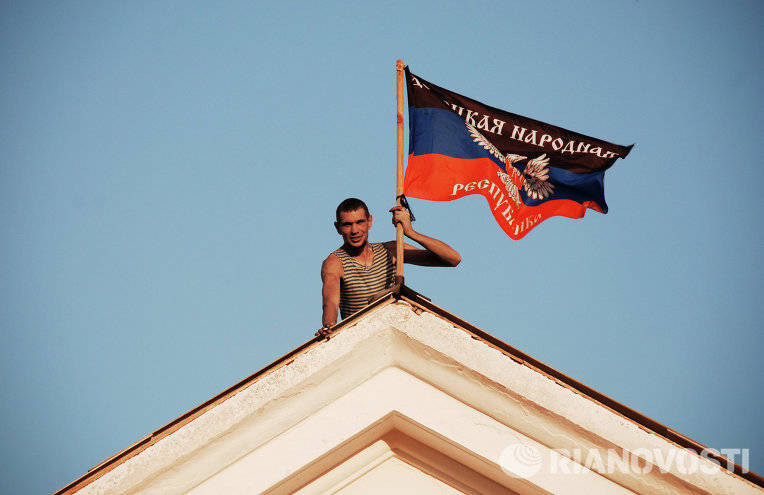 The prospects for the Donetsk and Luhansk People's Republics are extremely vague. And with any development of the military-political situation in the region. The negative scenario of the war for the Donbass militia automatically implies a harsh and ruthless destruction of the DPR and the LPR by Kiev. However, even with the development of a military conflict that is positive for the insurgent region, the very need for the existence of these formations is questionable. If the militia expands the territory it controls into the Southeast, the rebels will automatically face the task of creating a larger, united, and centralized state entity.

However, at the moment it is just one of the speculative probabilities.

However, now it’s not possible to talk about the real existence of the self-proclaimed republics of Donbass. As a state, they do not exist. Instead of them - a set of organized, armed groups of various numbers, controlling certain territories of the insurgent region. However, often these groups not only do not coordinate their actions, but also come into confrontation with each other.

Such a situation can be described in one word - chaos.

Civil power in the territory of the DPR and the LPR (as well as its representatives) remained from Ukraine. Both in form and in content. She is subordinate to the field commanders of the militia and continues to perform her organizational and administrative functions to the best of her ability and capabilities. This allows you to somehow maintain the work of the infrastructure that provides the population with the most necessary - electricity, water, gas, heat, transport, food supply.

At the same time, there is no longer a single state system in the rebel republics. The Ukrainian system was destroyed by revolution and war, and the "Novorossiysk" has not yet been created. This is primarily due to the lack of unity of command in the territory of the DPR and the LPR - centralized authority.

The destruction of centralized power, in turn, deprived the self-proclaimed republics of a fully functioning economic and financial system. And this plunges the region into a social collapse. Simply put, in order to live normally, people at a minimum need security, work and social benefits, but only a single, centralized power can provide it, and it is just in the region that it still does not.

In fact, at the moment the most important and important problem of the DPR and the LPR is the problem of autocracy. The republics of Donbass need a single leader with full power. And given the fact that the region is engulfed in chaos, the power of the supreme ruler cannot rely only on the militia battalions and access to the necessary resources. Under the circumstances, the main advantage of the general Donbas leader can only be his personal authority recognized in the region. Without an authoritative, charismatic leader, the power in the DPR-LPR will be extremely unstable, depending on the vagaries of field commanders and the moods of the majority of the militia. In the Donbas now there is no such leader.

That is why in this situation, the formal “chiefs” who are let down / appointed by someone “from above” cannot take full authority in the region into their hands. They will not even be the first among equals. A real obschestononbassky leader can be nominated only by the general decision of field commanders with the support of ordinary militias. The emergence of such a leader in itself can be the main stabilizing and organizing factor DNR-LC. The premieres of Donbass appointed by someone in Moscow are not a solution to the problem of autocracy, but rather its postponement. Without a really elected field commander of the general Donbass “ruler” and “commander in chief”, it will be extremely difficult, almost impossible, to overcome the chaos in the region.

It should be noted that in the conditions of war, the idea of ​​holding elections on the territory of the rebel republics looks extremely doubtful. At the moment, whoever the people choose in the bodies of civil authority, the real power will still remain in the hands of the military. Now in the Donbas, in the words of Mao, “the rifle gives rise to power.” And this must be taken into account. Therefore, while there is a war, as long as real power is in the hands of armed people, any democratic procedures will be purely decorative and essentially meaningless, unable to change anything in the current situation.

Obvious is the simple idea that to overcome the negative trends in the DPR and the LPR during the war, only the concentration of all power in the hands of the military, who are currently the only, more or less, organized force in the region, can overcome. And the functioning institutions of civil authority are a temporary element of the system of military-state organization.

In addition, it is not clear whether the leadership of the DPR-LPR understands right now that, given the difficult economic and financial situation, the distribution of food, medicine, fuel, etc. is advisable to be centralized with the help of a rationing system, concentrating all the existing republican finances which is impossible to solve without money.

The card system not only makes it possible to rationally allocate resources, but also creates conditions under which virtually the entire population, one way or another, is included in the work determined by the government. Thanks to the card system, every citizen can get access to the necessary benefits only by actively integrating into the socio-political and economic system of relations. This allows you to maximize the use of human resources, as well as to at least partially solve the acute shortage of funds and a no less acute social crisis.

In addition, it is not entirely clear whether the current leadership of the DPR-LPR understands the need to subordinate the defense tasks of the republics to all the forces and resources of the territory it controls, which makes sense only if it is turned into rear, providing the Donbass army with everything it needs. The physical survival of the people's republics directly depends on this.

At the moment, it seems that to a greater degree the governments of the DPR-LPR proceed from the simple idea that all of their problems will be solved by Moscow. However, any outside help will always have a limited and often dosed scale, and in principle it is not able to eliminate a number of strategic problems. The high degree of independence of the “Donbass republics” calls into question the possibility of their further full existence.

An equally important problem of “LPR” - “DPR” is their external political isolation and financial and economic blockade. These rebellious "republics" will never be recognized by the West. This, in turn, implies the implementation of a number of consecutive steps on the part of the leadership of the “DPR” - “LPR” in the direction of adapting to the conditions of unrecognized existence. It is extremely doubtful that Moscow is implementing the Crimean scenario in the Donbas. Crimea is an exception.

In general, it is extremely doubtful that the “DPR” - “LPR” has any chance of survival in their current organizational form and size. Most likely, the “Donbass republics” are either a transitional stage to something more efficient and large-scale, or the territory of a catastrophe without any prospects for the future.