Tatyana Poloskova. The disaster is near: the United States almost expelled BRICS from Latin America 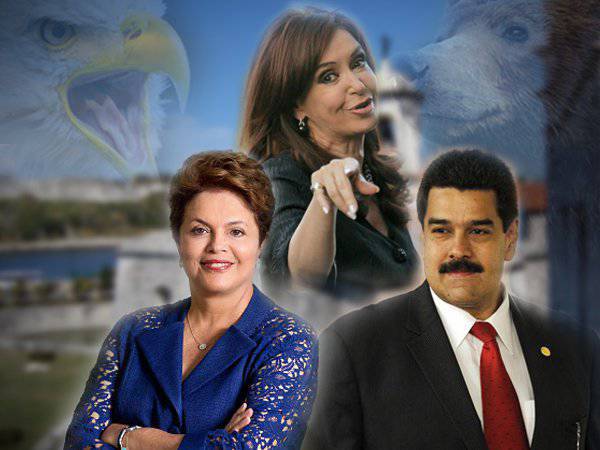 The declaration on the presence of geopolitical interests of Russia in the former “US backyard” (in Latin America) is a clear sign of recent times. However, a marked increase in political and economic contacts between Russian authorities and the states of this region does not mean that the United States will voluntarily leave, and the entire population of Latin America welcomes rapprochement with Russia.

A benevolent attitude toward Russians, which the “Latinos” willingly and quite sincerely demonstrate, does not exclude the presence of sympathy for the United States, even in those countries of the region that we now call strategic partners. The naive dream “to live as they live in the States” - has not left the mass consciousness anywhere. Emigration to the USA or to Western Europe is still a criterion of success for a huge number of Latin Americans. And even Cuba is no exception. The system of training the political, economic, and military elite of most Latin American countries in US higher education institutions has been successfully and successfully operating, the influence of the North American mass culture on the population of the region is strong, the network of North American NGOs, funded by the Department of State for a long time, has been working effectively USA.

In Soviet times, our work on the formation of "reference points" and "groups of influence" in Latin America was built systematically and on a solid financial basis. Including due to the operation of enterprises and "friendly" banks directly in the region. The remains of this heritage can be observed in some places and now. For example, on the plantation mate in Argentina and Paraguay, which now belong to ex-friends of the Soviet Union. There were also more serious schemes that allowed financing the political activities of pro-Soviet organizations and influential personalities. But to remember that has long been a new owner, it makes no sense. Two-thirds of the Soviet cultural centers, which for various reasons were recorded on nominees, are now also private property. And to return it in most cases is unreal.

Until now, Associations of graduates of Soviet universities in Latin America are numerous and in some places are active. Students from the region are going to Russia now, albeit not so massively. But the Soviet system of training and forming a friendly elite in the countries of Latin America was much more effective and set itself the task of not only providing education, but also certain principles. Now, to restore such work in the region and create a real alternative to the influence of the United States, it takes years, people, means and political will. And for starters - we need the truth. The truth about the real situation in our friendly countries. For some reason, no one says that even in Cuba, to which we have written off a huge debt, there has long been an increase in sympathy for the United States, especially among young people. “Americans will come - there will be jeans, a chewing gum and a car” - Cubans of the older generation, our diplomats, told me about such moods in the youth environment. What is opposed to this? Perhaps something. But these efforts do not reach the bulk of the Cuban population. While the situation on the Island of Freedom is controlled by the authorities. But the mechanism of economic liberalization has been launched.

Another reality is that the leaders of the countries of the region, who have declared a strategic partnership with Russia, are experiencing severe pressure from the opposition, supported by the United States, and the constant threat of bias. Including due to the formation of public discontent with the socio-economic situation, the level of personal security, etc. As it has been happening for more than a year in Venezuela, in Argentina, in Brazil. And not only there.

Our initiatives in Latin America are tied to specific leaders. Yes, these leaders have different reasons for friendship with Russia, often quite pragmatic. But they are our allies. However, while we rejoiced at the "strengthening of our influence" in the "backyard" of the United States, Washington sharply stepped up its long-standing "game" to dislodge the leaders of the countries "lit up" overly sympathetic to Moscow. Unresolved external debt problems, a drop in the living standards of Argentines, a noticeable decline in the popularity of the country's current president, Christina Kirchner, may well lead to the opposition winning the 2015 presidential election of the year. And then our joint plans, including economic rapprochement, will collapse. And the widely advertised cross year of Russian Culture in Argentina and Argentina in Russia will not save. A friend of our country, Christina Kirchner will be out of work.

The president of our strategic partner of Venezuela, Nicolas Maduro, in order to remove the social heat caused by the shortage of essential goods, went a few days ago to the adoption of a law that equates smuggling goods from the country to drug traffic. Nevertheless, the economic situation in Venezuela remains difficult, and the level of discontent among the population is high. Opposition leader Enrique Capriles, who does not hide the fact that he is supported by the US authorities, actively uses these difficulties. In the end, where the oil - there is blood. We want to keep "our" president in Caracas - something must be done. The office of the president of Venezuela is being consulted now, including on economic issues by Cuban experts. Why not ours?

The presidential election of 26 in October of 2014 in Brazil ended with the fact that the main BRICS locomotive in the Dilma Rousseff region passed with an extremely insignificant advantage - less than 3 percent. Moreover, in the industrialized regions of the country, its competitor won - a supporter of the North American vector of foreign policy A. Nevis. If D. Rousseff lost the election, Brazil’s participation in the BRICS could turn into a formality. October 26 held presidential elections in Uruguay. The Left Wide Front coalition has entered the second round, and this marathon will not be easy for them either.

Instead of declaring victorious reports: “We are ousting the United States from Latin America,” we must seriously think about how and how to support the allies in the region. A competitor D. Rousseff employed a large number of consultants from the United States in the elections in Brazil. Not from Russia. The state dialogue between Russia and Venezuela now, more than ever, needs the support of civil society. And enthusiasts are engaged in establishing connections. The huge and not poor Russian diaspora of Argentina is not at all involved in full measure as an instrument of sociopolitical and informational support for Russia. I do not mean festivals, Russian language courses, congress trips. I would like something more real. Especially in Argentina, as well as in neighboring Uruguay, where people from Russia are in fourth place in quantity, there is potential for this.

Latin American journalists and experts who support the dialogue with Russia, against the North American expansion should be known in our country. Their arguments should be voiced in the Russian media. They need to be broadcast. The permanent expert sites in Latin America with the participation of Russian specialists are needed. Civil society should join the dialogue of states. And after a while, not soon, but these efforts will have an effect.

PR campaigns and constant spells in the media that “Russia has returned to Latin America” and almost control the process actually disorient our population and mislead the country's leadership. As for the USA, they will not voluntarily leave Latin America. Even if politicians in power and enjoying the support of a large part of the population will point the door to them. The roots have grown too deep. But any roots can be uprooted during hard and proper work.