October 29 2014
38
The Brazilian aircraft manufacturer Embraer continues to work on the project of military transport aircraft KC-390. This machine is intended for deliveries to the air force of Brazil and other countries wishing to purchase new equipment. Despite the fact that the KC-390 project is far from completion, there are already preliminary plans to sell six dozen military transport planes of this type. 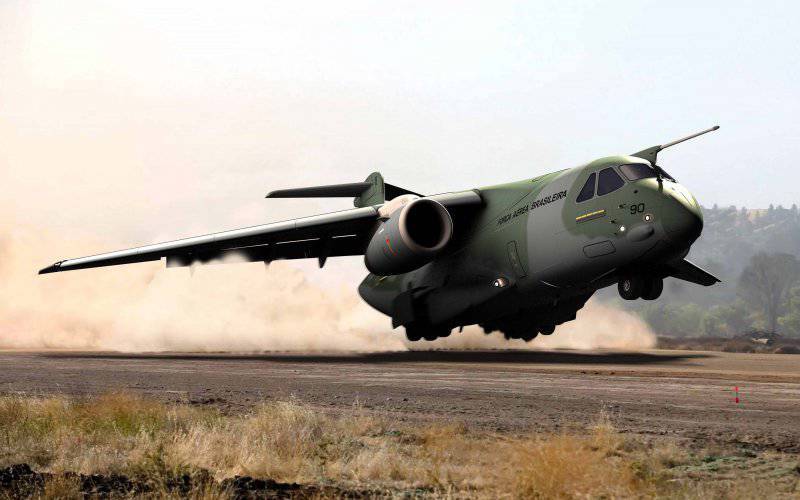 On October 21, the ceremony of rolling out the first flight prototype of the KC-390 aircraft took place at the Embraer plant in Gavian-Peixoto. The plane, which will participate in flight tests, received a registration number PT-ZNF and is painted in the "branded" gray-green colors of the Brazilian Air Force. The KC-390 project is of great importance to the Brazilian armed forces, which is why representatives of the air force command and the leadership of the Ministry of Defense attended the rollout ceremony. During the ceremony, several speeches were made, in which the significance of the new aircraft was noted, and great hopes were expressed in its attitude.

According to the test plan of the first prototype KC-390, shortly after rolling out, tests of various onboard equipment and power plant were to begin. Then the aircraft must pass various ground tests, after which Embraer specialists will be able to begin preparation for the first flight. If the ground tests do not reveal any serious flaws that could affect the timing of the work, the first flight of the KC-390 aircraft will take place at the end of this year. Other plans of the Ministry of Defense of Brazil and companies involved in the project, look no less optimistic. The first serial transporters of the new model are supposed to be transferred by the Brazilian Air Force to the end of 2016.

In the spring of 2008, the active work on the new project started. The development of the KC-390 aircraft spurred the contract of the Brazilian Ministry of Defense, according to which Embraer and other related companies in the project had to complete the project, build two prototype aircraft and test them. Embraer earned 1,5 a billion US dollars to carry out these works. Embraer, a Brazilian company, is the lead contractor for the project. In addition to her, Boeing (USA), ENAER (Chile), FAdeA (Argentina), OGMA (Portugal) and Aero Vodochody (Czech Republic) participated in the development of a new transport aircraft.

The Embraer KC-390 military transport aircraft has a maximum take-off weight of 81 tons and is capable of carrying up to 23 tons of cargo. According to reports, the KC-390 tanker aircraft will be able to transport about 37 tons of aviation fuel. The total length of the aircraft reaches 33,9 meters, wingspan - 35 m, height - 10,26 m.

The new aircraft was built according to the “high plane” scheme with a swept wing and two turbofan engines on pylons under the wing. To ensure an acceptable layout and aerodynamics, the aircraft is equipped with a T-shaped tail unit with a high-swept stabilizer. A characteristic feature of the KC-390 airframe is the in-flight refueling bar, located in front of the fuselage, to the left of the pilot's cabin.

To accommodate a payload weighing up to 23 tons, the KC-390 aircraft is equipped with a cargo cabin of 12,7 m length (18,5 m including space above the tail ramp), 3,45 width m and 2,9 height m. For loading and unloading, the aircraft has a tail ramp. Its front lower flap falls to the ground, the rear upper flap rises to the ceiling of the cargo compartment. In the modification of the tanker aircraft in the cargo compartment should be placed capacity for the transported fuel.

The dimensions of the cargo compartment and the carrying capacity of the aircraft will allow it to carry various payloads. For example, up to 80 passengers, 64 paratroopers with weapons, 74 wounded and 2 escorts, HMMWV XMNWX or similar 2 armored personnel carriers with acceptable dimensions and weight can be placed in the cabin.

As a power plant on an Embraer KC-390 aircraft, two International Aero Engines V2500-E5 turbofan engines with a thrust of 12 thousand kg are used. With such engines, the aircraft will be able to reach speeds of up to 850 km / h, fly over a length of more than 4800 km (with a payload of 13,3 tons) or 2590 km (with a maximum load). The ferry range of the transport aircraft should exceed 6000 km. The practical ceiling is defined at 10,9 km.

It is assumed that in the future the KC-390 military transport aircraft will be able to replace the currently used C-130, the resource of which is coming to an end. In addition, the tanker aircraft, created on the basis of the transport, will be used in the Air Force of Brazil and other countries instead of the old KC-130. At the moment, new type of aircraft plan to purchase several countries. In total, they can order up to 60 KC-390.

In 2010, the Brazilian air force announced plans to order a new type of 28 aircraft. The supply of this technology will not only seriously upgrade the fleet of military transport aircraft in the army, but also strengthen it quantitatively. In April 2014, the Brazilian Ministry of Defense and Embraer signed a contract for the supply of production aircraft to the 28.

In addition to aircraft manufacturers from Brazil, companies from several other countries that are also interested in purchasing such equipment participate in the KC-390 project. Argentina intends to acquire 6 such aircraft, Colombia - 12, Portugal - 6, Czech Republic - 2 and Chile - 6. In total, overseas customers intend to buy an 32 aircraft. Some other states are showing interest in the KC-390 project, but they are still familiar with the proposed equipment and are not ready to announce even approximate plans for its purchase.

The KC-390 military transport aircraft project is an important milestone in stories both Brazilian and Latin American aircraft industry. At present, and in the foreseeable future, this aircraft will be the largest aircraft under construction in the countries of South America. However, much more important is the fact that the proposed KC-390 really has a fairly high commercial potential and can be supplied not only to the countries that participated in its development.

To some extent, the KC-390 project can help the state of the international market for medium-sized military transport aircraft. The largest manufacturers of this class of technology, Russia and the USA, in recent years do not represent new developments in this field, but are upgrading existing aircraft. In such a situation, the emergence of a new military transport aircraft may be of interest to potential customers. The intentions of the countries participating in the KC-390 project with certain reservations confirm this.

According to various estimates, in the next decade, the world's air force will need about 650-700 middle-class military transport aircraft with a total cost of about 45-50 billions of dollars. Embraer plans that its KC-390 aircraft will be able to win at least 10% of this market. Thus, the successful completion of the tests and the start of mass production of the new transport aircraft will have positive consequences for the entire Brazilian aircraft industry.

However, Embraer KC-390 will not be able to quickly and easily take its place in the market. The success of the Brazilian development can prevent the main competitor in the face of the aircraft Lockheed Martin C-130J Hercules. In the near future, the construction of these aircraft will continue. American aircraft manufacturers have firm orders and options for several hundred of these machines. Thus, the Brazilian company Embraer will have to try to realize the full potential of its new development.

As we see, the Embraer KC-390 military transport aircraft and its modifications have certain prospects and may be of interest to a wide range of potential customers. However, it is too early to talk about his future and new orders from countries that have not participated in the development. October 21 rolled out the first prototype aircraft, which only have to proceed to the tests. Launching and mass production deployment are scheduled for completion by the end of 2016. By this time, the project will reach the stage where it will be possible to discuss its real prospects. In the meantime, the KC-390 aircraft looks like an interesting development, which may have a great future, but it may not meet the expectations of potential customers.