DVKD type "Mistral": news, disputes and the upcoming transfer of the ship "Vladivostok"

October 29 2014
164
Last Monday, new reports appeared on the future of the Russian-French contract for the construction of two amphibious helicopter-carrying dock ships (MKDD) of the Mistral type. In recent months, this contract has been the subject of controversy and various statements by the leadership of some foreign countries. According to existing plans, in the near future the first of the ordered ships should be transferred to Russia, which has a serious impact on the current situation and the opinions of the parties. 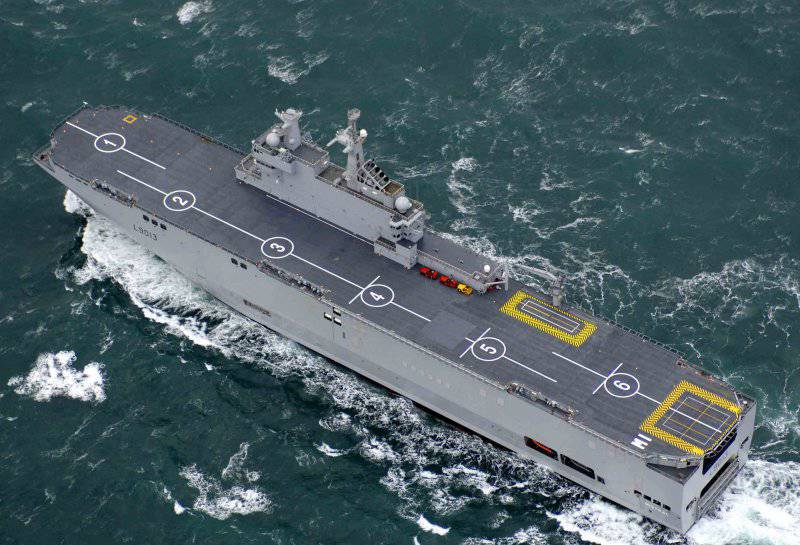 October 27 news agency RIA News with reference to an unnamed representative of the trade union of the shipbuilding company STX, published the news about the future of the first "Mistral" for Russia. According to the source agency, the ceremony of transferring the first ship, named Vladivostok, is tentatively scheduled for November 14. This date has not yet been officially approved, but union officials are preparing to hold all the necessary events on this very day. Thus, the transfer of the first ordered ship can be considered a matter of the next few weeks.

On Monday, the Euronaval 2014 exhibition opened in Le Bourget, France, as part of which delegations from many countries can familiarize themselves with the latest achievements of the world's leading defense enterprises. On the opening day of the exhibition, the head of the Russian delegation, the deputy head of the Federal Service for Military-Technical Cooperation (FSMTC), Anatoly Punchuk, made several statements about the current contract for the supply of amphibious ships.

According to A. Punchuk, all contractual obligations are fulfilled by the parties in full and in accordance with the established schedule. According to RIA Novosti, the FSVTS deputy director said that the Vladivostok ship should be part of the naval fleet Russia until the end of 2014. After that, the Severnaya Verf shipyard (St. Petersburg) will begin to install various weapons and equipment of Russian manufacture on the ship. All necessary work is planned to be completed by mid-2015.

In recent months, amid the aggravation of the situation in the international arena, it has been repeatedly suggested that France would refuse to transfer the ordered landing craft to Russia. It has been suggested that two Mistral-type ships could be transferred to some third country. A. Punchuk believes that the issue of the transfer of ships to a third country seems premature.

The new French-made MKDDD type is supposed to be equipped with various types of equipment. In particular, two ships will be able to carry attack helicopters Ka-52K. A. Punchuk said that now Russian aircraft manufacturers are assembling four experienced helicopters of this type. Tests of these machines are scheduled for next year. All work on the ship modification of the attack helicopter is planned to be completed before the end of 2015. In the future, the Ka-52K helicopter will go into series and will be used as a means of assault fire support.

On Monday evening, RIA Novosti published the words of an unnamed representative of the Ministry of Foreign Affairs of Russia. The diplomat noted the legal simplicity of the situation around the amphibious ships that has developed in recent months. In addition, he believes that the information fuss about the existing contract directly speaks about the interests of official Paris: the French leadership is interested in the successful completion of the contract more than Russia.

Information published last Monday is cause for optimism. The STX trade union is preparing for the first ship delivery ceremony for the Russian Navy, and the leadership of the Russian Federal Service for Military-Technical Cooperation notes the timely fulfillment of all contractual obligations. Thus, there is every reason to believe that the Vladivostok DVKD will indeed be handed over to the Russian fleet in the very near future.

A bilateral agreement between Russia and France, involving the construction of two amphibious ships, before the start of this year was a matter of only two parties - the customer and the contractor. A few months ago, this agreement was the occasion for events in the international arena in which the leaders of the United States took part.

Against the background of the Ukrainian crisis, official Washington turned to France with a demand to stop the fulfillment of the Russian order. Similar requests from the American leadership put Paris in a difficult position. The French leadership wants to maintain good relations both with the United States and with Russia, however, the continuation of work and the transfer of ships or the termination of the contract threatens him with serious political and economic consequences.

Ignoring Washington’s demands threatens France with serious consequences. This can be either a general deterioration in relations with one of the main partners, or a reduction in cooperation in the military-technical or economic sphere. It is unlikely that President Francois Hollande and his team are ready to take such risks and quarrel with American partners.

Complying with American requirements will also have serious consequences. Over the past months in numerous discussions formed a list of consequences for France. The most painful of them will be financial in nature. The construction of two amphibious ships costs about 1,2 a billion euros, and most of this amount has already been paid by the customer. In the event of a breach of contract, French shipbuilders will have to return the money paid to Russia.

A contract break will have serious social consequences. The Russian order allowed STX to create several hundred new jobs. If the construction of ships is stopped, the company will have to lay off a large number of workers, which may be the reason for protests and other public reaction.

Another risk for France is associated with reputation. If the country's leadership is ready to terminate contracts for the supply of weapons and military equipment at the request of a third party, then this state can hardly be considered a reliable supplier. Thus, in the event of termination of the contract for the supply of Mistral, STX risks losing future orders from some foreign countries. Similar problems may begin with other French manufacturers of weapons and equipment.

Finally, there is a specific technological issue. In accordance with the terms of the contract, the aft sections of the hulls of two Mistral-type ships should be built in Russia, at the St. Petersburg Baltic Plant. In the event of a breach of contract, Russia may demand the return of these structures, which, in particular, will not allow French shipbuilders to sell "incomplete" ships to a third party. It will be necessary to complete the missing units or dispose of the remaining parts of the ships.

Official Paris is well aware of the complexity of the current situation, which is why from time to time there are corresponding statements. For example, not so long ago, in early September, French President F. Hollande said that the current international situation does not allow the transfer of ships to the customer. A little later, the press service of the French president clarified the statement of Hollande. It was noted that the contract will not be broken, but the French side will have to take into account the current political situation.

All previous and subsequent statements by the French leaders about the fate of the landing ships ordered by Russia directly indicate that F. Hollande and his colleagues are trying to maintain good relations with both Washington and Moscow, and therefore are not in a hurry with making and announcing the final decision. In other words, not wanting to quarrel with foreign partners, Paris is forced to waste time by all available means.

Earlier it was reported that the first Mistral type DVKD should be transferred to Russia in early November. The planned deadlines for the transfer of the Vladivostok ship are inexorably approaching, which is why, in particular, the STX trade union is preparing for the solemn ceremony planned for mid-November. At the same time, the French leadership is in a difficult position. In the shortest possible time, he needs to make a decision that will have the least serious and painful consequences. What will be this decision - will be known in the very near future.