It's time for them to get used to the Russian Crimea!

October 29 2014
94
October 25 on the central square of Kirkenes (Norway) gathered a lot of people. King Harald V, Prime Minister Erna Solberg and Foreign Minister Berge Brende arrived in the city. Russian Foreign Minister Sergei Lavrov was present on the square. National festivities in Norway were devoted to the 70 anniversary of the liberation of the province of Finnmark from the fascist occupation. Soviet troops entered Kirkenes on October 25 of 1944. 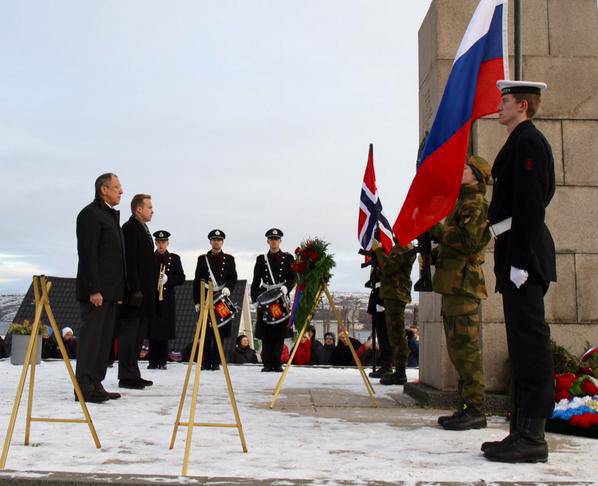 Comrade Lavrov laid wreaths at the monument to the Soviet Soldier-Liberator in Kirkenes. “Thank you for what you did, helping the Soviet soldiers, the Norwegian comrades; fought together; nothing will replace the martial fraternity. From our people, from our president, I want to convey to you the lowest bow of the earth and the wish of all the best, most importantly, health, ” "BFM" the words of the head of the Russian Ministry of Foreign Affairs addressed to veterans.

Our minister and his Norwegian colleague talked to veterans of the Norwegian resistance and those people who in childhood survived the last weeks of the war in a mining mine equipped for asylum.

“I was then ten years old, I was so small here ... Probably it was scary there, but we were children and did not understand everything, we even had fun. I remember the day when we rose to the surface, literally came to light. At the entrance stood a human figure - it was one of the Soviet soldiers who liberated us. We were very happy. Then I learned the first Russian words, but I will not tell you which ones ”, - quotes "Russian newspaper" Rolf Christiansen

Later, Comrade Lavrov admitted that conversations with the Norwegian veterans, and all the celebrations "were very touching and emotional."

“I am deeply grateful to the Norwegians for this atmosphere and for the respect for the memory of those who fell, freeing Finnmark,” said Sergey Lavrov. “The militant brotherhood of the two nations has become one of the foundations of good neighborly relations between the two countries.

The minister found it necessary to remind the Norwegians that Norway “joined the unilateral restrictive measures against Russia”, which does not benefit the contacts of Moscow and Oslo. Lavrov pointed out that Oslo made a similar decision: “This was done for reasons that, as we understand, are outside of Norway. Nevertheless, we see a mutual interest in developing the economy, jointly addressing environmental issues, nuclear and radiation safety, and cross-border cooperation. ” He expressed the wish that in relations between the two states "common sense should prevail, and countries should act on the basis of their own national interests, and not external pressure."

On the eve of the celebrations in Kirkenes, the Norwegian edition "Aftenposten" devoted an article to the relations of Norway and Russia. And it came to the conclusion: the anti-Russian front is weakening in the world.

One of the cornerstones of world politics in the article called the "big question" about the approximation of the "normalization of relations between Russia and the West." With a clarification: isn't it time for the West to “get used to living” under the “annexed” Crimea?

The fact is that a single “front” against Russia simply does not exist. There are disagreements among NATO and EU member states, and they are especially noticeable when it comes to the United States. It shows, the browser writes, that Barack Obama failed to form the “common front” that he had previously spoken about.

Slovak Prime Minister Robert Fico clearly spoke out against the deployment of NATO forces in the country. And he didn’t just speak out, but compared him with ... the Soviet invasion of Czechoslovakia in 1968!

By the way, the Czech Minister of Defense Martin Stropnitsky holds a similar opinion.

These countries that participated in disputes over EU sanctions played the role of "brake pads", and also contributed to the discrepancy between the US and Europe on issues relating to relations with Russia.

Finally, recently the new Polish premier Eva Kopach, speaking in parliament, told deputies about the unreality of goals in the Ukrainian conflict.

And that is not all. The reviewer points out that “new motifs” are already sounding in the USA.

For example, journalist Andrew Roth (“The Washington Post”), which specializes in foreign policy issues, draws the attention of readers to the fact that some of the former communist countries under President Bush who actively supported the United States in the matter of the war with Iraq have now slowed down Listen to the White House.

What happened? It turns out that many politicians fear that in the event of a confrontation with Russia, no one can fully rely on NATO and the United States.

Even the new NATO Secretary General Jens Stoltenberg, who is looking intently at the east, is believed to have weakened the anti-Russian rhetoric.

The publication reminds that already at its first press conference, he pointed out the possibility of holding a new meeting at the level of the heads of foreign ministries in the Russia-NATO Council. The publication asks a question: did the “difference in style” of Jens Stoltenberg and his predecessor Anders Fogh Rasmussen show up here, or is there a warming coming between Russia and the West?

As for the European sanctions against Russia, then, reminds the newspaper, Norway joined after the "annexation of the Crimean peninsula." However, today the tone of the government has changed.

The government wants to strengthen relations with Russia, including developing well-established contacts and "further developing relations in the sphere of bilateral cooperation." All these statements suggest that a further foreign policy strategy does not provide for the support of sanctions against Russia.

Thus, by his statement on the day of the seventieth anniversary of the liberation of the province of Finnmark from the fascist occupation, the Russian foreign minister, one might say, put a geopolitical point: making it clear to the Norwegian government that the time for non-independent decisions was a thing of the past and it was time to make decisions based on the interests of their own, not wishes of overseas partners, for whom Norway can be a bargaining chip in anti-Russian politics.

Comrade Lavrov is absolutely right: common sense must prevail. It's time to stop dancing to the tune of the Washington "hegemon."