Britain strikes back against pogroms 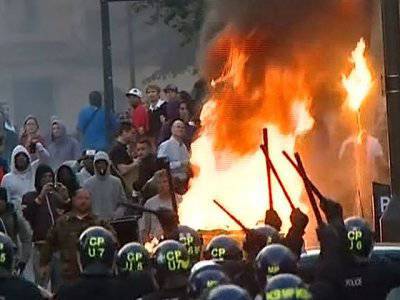 At an emergency session of the British Parliament, Prime Minister David Cameron presented a tough plan to fight street pogroms. If this happens again, troops can be brought into the cities, and all social networks on the Internet will be blocked by special services. Similarly, by the way, the authorities of the Arab countries acted during the suppression of the recent uprisings. The number of arrested marauders is almost one and a half thousand. Among them are quite unexpected characters: a junior school teacher, a 11-year-old child and a millionaire's daughter. And they stole everything except books.


Such Britain appeared to the world for the first time. Not terrorists, not a natural disaster — their own children plunged the country into chaos for several days. Extraordinary meeting of the parliament - all have returned from their vacations: deputies, the government. The Prime Minister has to admit that the country was not ready for such a threat.

"All the violence comes from street gangs. They divide the territory, they have a rigid hierarchical structure, they are incredibly cruel, and there are almost all from dysfunctional families. They live offenses, selling drugs, in constant clashes with other gangs and random robberies passers-by. We have evidence that these people are behind the attacks on police officers and shops, "the prime minister said.

The police - there were a myriad of questions for the British over the past few days: where were the constables when the first 3 nights of shops were blazing, at home, when people were beaten right on the street? The head of government repeats what the whole country understood in the first nights of the pogroms - ordinary gangsters were operating on the streets, not demonstrators.

London, Liverpool, Manchester and Birmingham - damage to private business was, by the most preliminary estimates, 140 million pounds. The government today announced that it will offset the cost of repairing shops and introduce tax breaks. In Tottenham, where the pogroms began, many people became homeless, the hooligans turned their houses into ruins.

- These thugs were like animals, but no - worse than animals, absolutely brainless. And most annoying when someone says: this is social inequality, they have no opportunity to get an education. Nonsense is all!

When the meeting of parliament ends in Westminster, the funeral of three young men who died in a skirmish with thugs will begin in Birmingham. They were trying to protect their car service from the teenager punks who had been heated by alcohol. David Cameron acknowledged that the image of the country is seriously flawed. And the blame for this lies, in his opinion, on families whose offspring turned out to be so greedy for easy prey.

“We have to show the world that the criminals we’ve seen on the streets in the last few days are not Great Britain. It’s not our youth. We have to show them that our wounded society will become stronger in spirit, in every city on every street every home. A year before the Olympics, we will show everyone that Britain is not a country of destruction, but a country of creation, "the prime minister said.

In the afternoon, the center of London is still full of tourists, but as the sun goes down, those who came to see Big Ben prefer to sit in hotels. The 16 of the thousands of police officers who are on duty today in the British capital seem to them to be an insufficient guarantee of security.

From now on, members of youth gangs in the UK are equated with adult criminals. The courts work, endlessly passing 15-16 sentences to summer boys and girls. By the beginning of the school year, far from all will return to schools and colleges.

Britain strikes back. In his speech to the parliament, the Prime Minister emphasized that even children took part in the pogroms. The main question today is what the answer will be. Will it be a parent headset or a hard spanking in the best traditions of British education. The youth said and showed everything they wanted. What can the country answer them?

We are in Yandex Zen
Results of the week. "In the queue, sons of bitches, in the queue!"
1 comment
Information
Dear reader, to leave comments on the publication, you must to register.