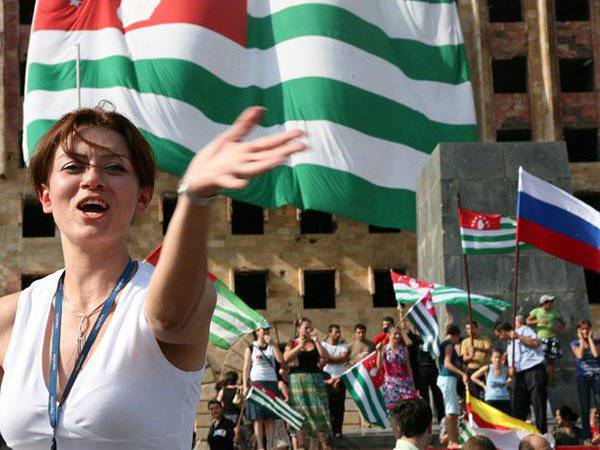 Abkhazians in their native language call their homeland "Apsny", which translated into Russian means "country of the soul." Hundreds of thousands of Russian tourists visit Abkhazia every year. Stunning nature, abundance historical monuments - all this attracts masses of people. However, Abkhazia today is of interest to Russia not only as a recreation area, but also as an important geopolitical and strategic object, a territory in which for centuries a fraternal people, connected with the people of Russia by centuries-old historical ties, has lived.

Today, Abkhazia is the most interesting object of social studies. The territory where about 240 live thousands of people, recently survived the war and the post-war economic blockade, demonstrates serious results and achievements in state and social construction. Another reason for the actualization of the Abkhazian problems is that this country is a border zone of Russia, which not so long ago was one of the “hot spots” of the post-Soviet space. The hopes of the Georgian state in their bosom Abkhaz territory, as well as the hopes of the western allies of Georgia to maximally weaken both the Russian state in general and the Russian presence in Abkhazia, in particular, are not a thing of the past. Building literate, verified relations with today's Abkhaz elite is a major strategic task for Russia.

Based on the above given paradigm, we will try to illustrate the main constants of the current Abkhazian socio-political process.

1. "The frame of consent" within the modern Abkhaz elite. At the moment, the frame of elite national consensus is clearly visible in Abkhazia. The highest task of the elite - to carry out state construction in accordance with the needs of the time - is consistently solved by the ruling circles of the republic. Despite the fierce struggle of the Abkhaz clans and the active opposition, the elite consensus and the system of tacit arrangements supported by them made it possible for the fourth President to come to power for one and a half decades while maintaining a single and fairly successful socio-political and socio-economic course.

2. Ideological-semantic fullness of the activities of state-power units. The priority for state building in Abkhazia is the creation of an Abkhaz national state. Its source is the system of Abkhazian historical, spiritual and cultural symbols that have developed over the course of more than a thousand-year historical period.

3. Honoring holy places. Christianity plays a very significant role within the spiritual world of the Abkhaz. This is illustrated by the many ancient churches built in the 9-11 centuries, during the heyday and greatest power of the Abkhazian kingdom. These temples and many of the icons that have survived to this day are a source of special pride and love of the locals. At the same time, the Christian teaching in Abkhazia entered into the closest interaction with Apsuara, the oldest code of Abkhaz ethics. Following its centuries-old covenants helps the Abkhaz to maintain fraternal relations between representatives of various religious denominations (for example, today there are more than 15 percent of Muslims in the republic) and deep national solidarity.

4. Patriotic education of the masses and the feeling of "holy paternal land." When you communicate with Abkhazians, you deeply feel that their whole life is imbued with love for their homeland. Each of its significant components, each holy place, each historical symbol is a subject of special worship and feelings of great spiritual warmth. The inexhaustible attitude of the "native home" gave the Abkhaz the opportunity to survive in extremely difficult historical conditions. This feature was clearly reflected in the course of the Abkhaz traditional feast. The Abkhazians raise the first toast to the Almighty, the second to Abkhazia, the third to commemorate those who died in the wars for their country. The current leadership of Abkhazia attaches great importance to the strengthening of this socio-forming factor, its influence on national life. Among the most important modern Abkhaz holidays are the Day of Liberation (Day of Victory over Georgia), Flag Day of Abkhazia, Day of Recognition of Independence of Abkhazia by Russia. Both the bright and tragic dates of Abkhazian history never go unnoticed, they are widely celebrated at the national level, in accordance with historically established traditional principles and rules.

5. Attitude towards Russia as a strategic ally. Russian-Abkhazian relations have a long history. Many Abkhaz residents were participants of the Great Patriotic War, heroically proved themselves, defending our common fatherland - the Soviet Union. At the national level, the Russian-Abkhaz spiritual and historical connection has never been lost. The most active assistance to the Georgian-Abkhazian war of 1992-93 was provided to the Abkhaz by Russian volunteers, Cossacks, representatives of the peoples of the North Caucasus, South Ossetians. The memory of these events is kept by many natives of Abkhazia. In 2008, Russia recognized the independence of the Abkhaz state, after which the socio-economic, political, military and cultural cooperation between the two countries increased very noticeably. Today, Abkhazia looks at Russia as the most important strategic ally, a true guarantor of its security and stable livelihoods.

However, despite the positive realities of the socio-political development of Abkhazia, it seems necessary to point out to today's problems that in the future could pose a threat to both Abkhaz society and Russian-Abkhaz all-round cooperation.

The absence of a clear and clear strategic line of Moscow with respect to Abkhazia forces the Abkhaz elite to seek support in other regions of the planet, including the forces, the excessive rapprochement with which can pose a serious danger to the stable functioning of both states. For example, the reality of today's Abkhazia is the maximum actualization of the Mahajir theme, which includes the building up of Abkhaz immigrants on a pedestal in the countries of Asia Minor, who left their homeland under pressure from Russia in the era of the Caucasian War. The mahajir theme has a pronounced anti-Russian content, it is successfully used in its game against Russia, Georgia, Turkey and many other countries. Further escalation at the state level of this problem can create additional strategic difficulties in relations between Abkhazia and Russia. In addition, the Mahajir component of modern Abkhaz ideology inevitably leads to two things: the build-up of ethnic Abkhaz nationalism and the deformation of the modern ethno-religious balance of Abkhazia. Already today, conditions are being created in Abkhazia for the mass migration of descendants of Mahajirs from Middle Eastern countries. Their ancestors two centuries ago left Abkhazia. Today, these people come from a completely different social, cultural and religious environment. What can connect them with modern Abkhazians, the overwhelming majority of whom were born in the USSR, and from birth bears the sociocultural codes of the Russian multinational civilization? The feeling of some kind of ethnic solidarity and common historical symbols resurrected from the past two hundred years ago. It is clear that such a synthesis will most likely have an anti-Russian and, above all, anti-Russian orientation. Moreover, the mass resettlement of the descendants of the Muhajirs will harm other national communities living in the territory of Abkhazia, since they, unlike the indigenous Abkhazians, do not have the experience of living together and interacting with them.

A serious threat to Russian-Abkhaz relations is also represented by the activities of many non-governmental organizations in the republic. Very often, it is indirectly controlled by Western socio-political structures, whose goal system does not coincide with Russia's geopolitical interests. The events of recent months show that their activity in the Abkhaz political world is very great, and over time it can create a serious hotbed of tension on the territory of Abkhazia, and this, in turn, will bring a very serious sense of danger to the life of Russia's southern regions. The Russian power vertical must urgently analyze the current state of affairs and work out an adequate set of measures allowing it to be proactive and to prevent the loss of the current Abkhaz frontier in the future.

The Russian leadership also needs an urgent elaboration of a clear strategy in the Abkhaz foreign policy direction. Both Moscow and Sukhum must clearly understand that the preservation of the currently existing ethno-confessional balance within Abkhaz society is the most important condition for stability and security both for Abkhazia itself and for the whole multi-profile system of Russian-Abkhaz relations.

The current geopolitical position of Abkhazia dictates the exceptional importance for Russia of the specified geographical region. In turn, Russia is the only guarantor of the vital activity of modern Abkhazia. The development of sustainable principles and guidelines for the Russian-Abkhaz system of relations is the most important task of our foreign policy. It is hoped that it will be adequately resolved and will become a true guideline for state bodies, officials, business departments and other elite-social groups of both countries, on which the future of our peoples directly depends.