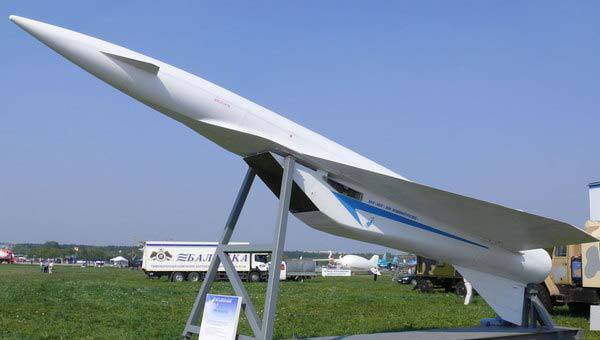 The MAKS international air show, which is held annually in the city of Zhukovsky, has repeatedly become a platform for demonstrating unusual air weapons systems. The MAKS-2007 air show was no exception. His main exhibit was aviation cruise supersonic missile (TFR) Meteorite-A. The rocket, which was developed under the 3M-25 index in the NPO of mechanical engineering under the guidance of academician V.N. Chelomea more than 25 years ago, today received a new life. Meteorite-A, despite its full technical readiness, was never put into mass production, however, according to a number of military experts, given the growing progress in the field of electronics, this project should be reanimated. The Meteorit-A missile conceptually differs from many other strategic cruise missiles, created in the 70–80s, flying to the target at extremely low altitudes with subsonic cruising speed. A missile weighing more than 6 tons was supposed to overcome enemy air defense systems at a maximum height of 22–25 kilometers at a speed of 2700–3240 km / h. The designers of the unusual rocket laid the possibility of hitting the specified target at a distance of 3-5 thousand kilometers from the launch point. It was also assumed that special equipment would form behind the TFR a plume of significantly ionized air, which prevents the precise guidance of ground-based anti-aircraft missiles on it.

History creating a rocket next. In response to the deployment of fourth-generation cruise missiles by the United States, NPO Mechanical Engineering was tasked with developing a long-range TFR as one of the main means of maintaining the balance of the strategic nuclear forces at that time. Equipped with a unique "intelligence" that allows you to perform all sorts of maneuvers on the trajectory with extremely accurate access to the specified target, this rocket would become almost invulnerable to enemy air defenses.

Faced with new technical issues, including the stated requirement of a long flight in the atmosphere at supersonic speeds, NGO experts found new solutions for choosing the aerodynamic design, power plant, structural materials, ensuring the thermal regime. The leading research and design teams of the country were involved in the development of management systems based on completely new principles. The complex was created under the vigilant control of the Council of Chief Engineers, chaired by Professor V.N. Chelomey. The protection of the first draft of the water-based complex took place in mid-December 1978 of the year, and the airborne defense - a month later, in January 1979. 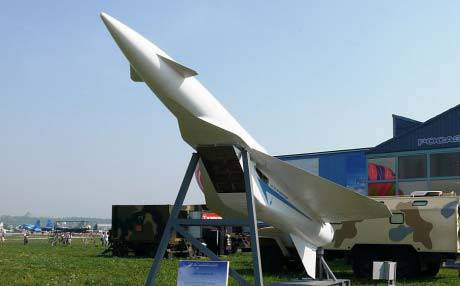 A huge amount of ground bench tests managed to perform as soon as possible. In the course of these tests, it was experimentally proven that all the technical solutions were correct. 20 May 1980 was the first launch of the TFR from the test ground stand, and at the end of January 1982 of the year - the first launch from the submersible launch site from a submerged position. A converted submarine of the 667A project was chosen as a submerged platform. The launch from the aircraft-based site was carried out from a special carrier aircraft Tu-95MA.

During the flight tests of the “Meteorit-A” missile, 70 launches were conducted - 50 from a ground stand, a submarine and PSK and 20 from a Tu-95MA aircraft. The first tests of the ultra-long-range missile before the technical management set a number of new tasks. First of all, as it turned out, the range of the Kapustin Yar combat range for testing a rocket of a similar range was not enough. In order to compensate for the lack of distance in the flight path from Balkhash to the Volga, it was necessary to conduct a unique maneuver for the rocket flying at such a speed on the turn to 180 °. The launches were also carried out in the interests of assessing the degree of protection of the missile from air defense systems, for which two modern anti-aircraft missile systems were used. But, despite the fact that the flight trajectory and launch time were known, with the onboard protection systems turned off and the maneuvering programs, the launched anti-aircraft missiles were able to destroy the TFR only from the second launch.

In terms of tactical, technical and combat characteristics, the Meteorit-A missile significantly exceeded all of the strategic naval and air-launched cruise missiles available at that time. When creating the complex, a number of unique systems were developed. However, "Meteorit-A" was not destined to be put into service. The reason for this was the decision taken at the beginning of 80's to equip existing strategic bombers with another missile of this type - created in 1982 in the Raduga ICD with the X-55 rocket, which was adopted at the end of 1983 for strategic aviation complexes Tu-95MS, and then upgraded Tu-160. Terrible "Meteorite" remained at the level of a prototype, but perhaps the situation will change in the near future.
Ctrl Enter

We are in Yandex Zen
Strategic cruise missile Northrop SM-62 Snark (USA)
Missile attack on Europe: myth or reality?
Add a comment
Information
Dear reader, to leave comments on the publication, you must to register.