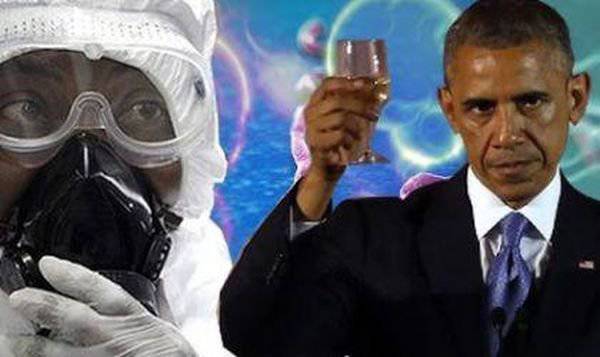 Despite international emergency measures, Ebola fever (1) continues to spread throughout the world. On October 25, people infected with the virus were recorded in seven countries. Most of these occur in three countries in West Africa - Liberia, Sierra Leone and Guinea, (2), where the natural distribution of the virus lies. October 23 received a message from Mali about the first confirmed case of a virus infection now in this country. (3) The Ebola case requires consideration of two interrelated aspects - the medical and the political.

History It began in March 2014, when the world media began to report on all new cases of the spread of the deadly virus. Since the end of summer, international organizations and world leaders have joined in the dissemination of information about fever.

At the end of August, the World Health Organization (WHO) declared an “international emergency” in connection with Ebola. WHO Head M. Chen visited a number of countries, and everywhere she was received at the level of heads of state. 18 September The UN Security Council adopted an unprecedented resolution in its history, in which the outbreak of the disease was qualified as "a threat to international peace and security." (4) This formulation allows the Security Council to take any coercive measures under Chapter VII of the UN Charter, but the main thing is that for the first time in the history of the UN the “threat to the world” is recognized as a virus. What are the reasons for this? Note that the resolution was sponsored by the United States. The priority of the issue was confirmed by US President B.Obama in his speech at the 69 session of the UN General Assembly. (5)

The issue of Ebola was extraordinary submitted to the UN General Assembly. Delegations were addressed by UN Secretary-General Ban Ki-moon, who introduced the draft resolution (6) on the establishment of the UN Ebola Emergency Mission. And this, too, is an absolutely unprecedented step. The states adopted the draft resolution submitted unanimously and practically without discussion. Let us note the speed with which this resolution was carried out: a letter from the UN Secretary General (7) to states proposing to establish such a mission dates back to September 17, that is, the decision was made within one day! (8)

How to explain a similar reaction? When you try to answer this question, you begin to face a number of oddities.

Striking and too obvious disinformation in the media about the lethality of the disease. In some cases, 100% mortality was formally noted, but these were cases of infection of a small number of people when statistics are not indicative (for example, one death case per one patient). More reliable statistics give the above-mentioned outbreaks of the disease, in which the proportion of deaths was 75 - 88%. This is a very high percentage, but it should be noted the low level of medical care in these countries. As for the picture of the lethality of the current Ebola outbreak, it is either not present or distorted. It is often stated in the media that the death rate from Ebola reaches 90%, (11), but this is not confirmed. The official WHO statistics for October 19 states that 9936 was recorded as a result of all infections, of which fatalities were 4877. (12) That is, the mortality rate is about 50%. It is much lower than in previous epidemics, which did not attract the attention of the international community at all. The same can be seen on the example of individual countries: Liberia (4.665 cases of infection, 2.705 cases of death of patients, ~ 50% mortality), Sierra Leone (3.706 diseases, 1.259 deaths, ~ 35%), Guinea (1.540, 904, ~ 60% ). Why did it take so much to exaggerate the deadliness of the virus?

In the absence of any vaccines, the mortality rate in 50% means that in half of the cases a person can develop immunity and recover without any medication. People who survived Ebola infection can now be attracted to almost safe work with this virus. At the same time, some vaccines are still used. This is suspicious, because the scale of the catastrophe very much resembles, on the one hand, a large-scale experiment on the development of natural immunity, and on the other - mass testing of certain vaccines. Several incidents of reprisals against medical personnel, which were reported in passing to the media, were attributed to the “ignorance” of the local population, but they may have more serious grounds. What is really behind the attacks on the medical staff by those who seem to be most interested in their help?

Thirdly, the emergency declared by Ebola looks somewhat grotesque against the background of the general situation with deadly diseases raging in the modern world. But an objective assessment of the Ebola virus epidemic can only be given in the overall assessment of the global epidemiological situation. For example, malaria does not cause any extraordinary measures, killing around 700 thousands of lives each year. And just in the very same countries of West Africa, where Ebola is now rampant. Some forms of malaria lead to death within a few days or even hours, that is, this disease kills much faster than Ebola. No emergency measures are taken in connection with ubiquitous tuberculosis. According to official statistics from WHO, only in 2013, the 9 of millions of people became infected with this disease. In 2014, a million people died from tuberculosis in 1,5. (13) It should be noted that overall tuberculosis mortality has decreased by 45%, but if we talk about a special, relatively recent form of tuberculosis - multiresistant tuberculosis, (14), here the mortality rate is comparable to that of Ebola. Why, then, did Ebola become the basis for global anxiety at a time when there are other, more dangerous diseases that take a lot more lives, are more deadly, and are spread throughout the planet?

Finally, it should be noted, and such strangeness as a source of funding for research on the development of Ebola vaccine in the United States. It turned out that the financing was carried out not by medical companies, but by the US Department of Defense (jointly with the National Institute of Health). By itself, this fact is not proof of the use of Ebola as a biological weapons, but the system of modern medicine in the capitalist world itself makes investments in vaccine development unprofitable. On the one hand, these are small “market” sizes - until the last outbreak of the disease in 36 years, only 2200 cases were recorded. On the other hand, it is a low financial capacity of such a “market”. Even in the event of a massive spread of the disease, practically none of the people of Liberia, Sierra Leone or Guinea could pay for the medicine.

Consideration of all the oddities in the story of a new outbreak of the Ebola epidemic suggests that the spread of the virus is not only medical reasons. Regardless of the natural or man-made nature of the epidemic itself, there is reason to believe that some states and the international organizations controlled by them, as well as the media, acted as agents of certain pharmaceutical companies. In hysteria around the Ebola epidemic, we see the goal of expanding the vaccine market in order to make this vaccine not only payable, but also bringing super-profits - if we succeed, of course, in making a permanent dependence on it a number of states. If the trade can be deployed, it will be put on the state level. Only more precisely, it is not called trade, but international racket. Or a special operation. Once, something similar had already been done with regard to South Africa, when an entire state was made dependent on the supply of a specific medical product produced by a particular pharmaceutical company, allegedly for the treatment of AIDS.

The saddest thing is that the level of cruelty of the special operation means that it will be impossible to refuse the services offered. It cannot be ruled out that the Ebola epidemic is an element of the total destabilization of the world community, which the United States itself is doing today, and a new form of introducing a multi-level crisis, the cure for which will be offered only to the “elect.”

(1) Ebola febris haemorrhagica (Latin) is an acute viral disease with a high degree of infection.
(2) The remaining states are Nigeria, Senegal, Spain and the United States.
(3) The Ministry of Health of the Republic of Mali reported a disease in the city of Kayes. http://bamada.net/alerte-ebola-le-ministre-de-la-sante-confirme-un-cas-avere-du-virus-ebola-a-kayes
(4) See UN Security Council Resolution No. 2177 (2014) of 18 September 2014.
(5) UN document: A / 69 / PV.6
(6) “Measures to contain and combat the recent outbreak of Ebola fever in West Africa” - draft resolution submitted by the President of the UN General Assembly // UN Document A / 69 / L.2 // http: // daccess-dds-ny .un.org / doc / UNDOC / GEN / N14 / 539 / 35 / PDF / N1453935.pdf? OpenElement
(7) Identical letters from the Secretary-General dated September 17 to 2014 addressed to the President of the General Assembly and the President of the Security Council // UN document: A / 69 / 389 – S / 2014 / 679 // http: //daccess-dds-ny.un .org / doc / UNDOC / GEN / N14 / 538 / 81 / PDF / N1453881.pdf? OpenElement
(8) The swiftness of the decision is emphasized by the fact that we had to specifically circumvent the 78 article of the Rules of Procedure of the UNGA, which states: “As a general rule, no proposal is discussed or put to a vote at any meeting of the General Assembly, unless it was communicated to delegations no later than one day before the meeting. ” UNGA delegates were given only a few hours to make a decision.
(9) There are several types of virus, in particular Zairian, Restonian, Sudanese, Bundibugio (detection zone - East Africa) and Cote d'Ivoire (detection zone - West Africa). The 2014 epidemic of the year is caused by the Zaire type of the Ebola virus.
(10) There are two known cases of death from Ebola in Russia in 1996 and 2004. Both cases were virus infected in laboratories for scientific research due to the careless actions of laboratory technicians.
(11) See, for example: "The Ebola fever today is not amenable to treatment, the mortality in the case of the disease is 90 percent." // http://www.fondsk.ru/news/2014/08/05/terroristy-mogut-ispolzovat-virus-ebola-kak-biologicheskoe-oruzhie-28787.html
(12) UN press release from October 22 2014.
(13) In Russia, 2013 infected thousands of people with tuberculosis in 106 year, 17 thousand people died.
(14) Almost half a million people were infected with this form of tuberculosis in 2013, about 5% of all cases.