Conversation with the people

October 27 2014
24
Let me say a very strange (in the conditions of a country torn by civil war) thought: Ukraine is one. And you know, the people, what exactly is it one? In its total and absolute rejection of the status quo in the country. 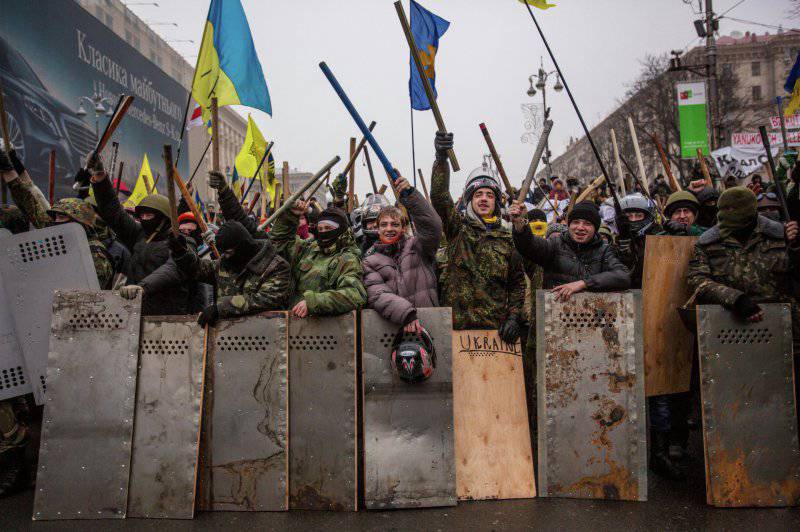 Only a fool will deny the obvious fact that Ukraine’s Maidan, just like the insurgent Donbass, equally hates that socio-political and financial-economic system, against which the Maidan first rose, and then picked up weapon Donbass.

Do you, the people of Ukraine, still believe them?

If you listen carefully to what the commanders of the Donbass militia and its ordinary fighters are talking about, it becomes clear that they are not fighting for the separation of Donbass. They are well aware that the independent Donbass is the beginning, not the end of the popular struggle.

And they are fighting for a just society and a people's state within the borders of today's Ukraine. Today's bleeding Donbass is yesterday's bleeding Maidan.

But the Maidan lost. Lost because, overthrowing the clan of Yanukovych, he gave power to other oligarchic clans no less vile and more bloodthirsty. Independence lost, because he was deceived by their own leaders. They not only did not fulfill their promises, but drowned the country in blood. The victorious Poroshen, Kolomoisky, Yatsenyuk and other Turchinovs called part of the people "terrorists" and "separatists", setting another part of the people against it, using beautiful patriotic slogans. And the common people began to kill themselves in a fratricidal slaughter.

But after all, the original purpose of the Donbass militia was a military campaign against Kiev, and not a branch of Donbass. Hike in Kiev against oligarchic clans entrenched there, against their absolute power and the same arbitrariness. But the lies of the propaganda of oligarchic mass media have eroded consciousness, paralyzed the ability to think, and the brother began to kill his brother for the oligarchs to continue to eat fat on people's grief and trouble.

The Ukrainian "zomboyaschik" continuously broadcasts that "separatists", "terrorists", Russia and Putin are to blame for all the troubles of the country. But let each of us ask ourselves ... And who robbed Ukraine for almost 25 years? Who took away from ordinary people everything that could be taken away? Who ruined the economy? Who closed plants and factories? Who plundered the treasury? Who turned most of the population into beggars? Who set people apart? Did “separatists”, “terrorists”, Russia and Putin deal with all this for a quarter of a century?

And maybe, after all, it made our pansy? I have long wanted to ask those who stood on the Maidan: were you there for the sake of Poroshenko, Yatsenyuk, Kolomoisky and Turchinov or for the sake of a new country in which it would be good to live for everyone, not just the elect? Probably for the sake of the second? Is not it?

In this case, ask yourself: did you get this new country, for which you went to the Maidan? Yes, Poroshenko and Co., thanks to your efforts and your blood, seized power, but did they use it to you, the common people, for good? Have they given you, the common people, the new, just country you dream of? Do you, the common people, feel even small changes for the better for yourself? Not? But then why do your Maidan leaders continue to grow fat, and are you begging and bending? Have you asked yourself this simple but very important question?

Well, if you don’t feel better, if your Maidan leaders are exactly the same as Yanukovych ousted by you, then why and why are you killing your brothers in the Donbass who don’t want to put up with the new power of the old oligarchy? Personally, you, the common people of Ukraine, have at least one reason to kill a part of yourself? Do you really think that killing innocent people will make your life better? Or do you still believe that artillery shelling and bombing in the Donbas are killing invented by corrupt journalists oligarchic media "terrorists", and not ordinary people?

Do you know, the Ukrainian people, what is the real fault of your Donbass brothers? The only, but very terrible "sin" of Donbass, is his unwillingness to live under the rule of your oligarchs and your superiors. Donbas does not need your president, nor your deputies, nor your politicians, nor your "heroes." It is for this that ruthlessly kill its inhabitants. They kill not only men who took up arms to protect their homeland, but also women, old people and children, everyone who does not want to live under the yoke to which you are so used, and without which, judging by everything, you can no longer live .

You, the simple people of Ukraine, consider yourself free, but then why do you continue to live under the yoke, dying from poverty, lawlessness and injustice? Why did you drop only Yanukovych, and not all of your oligarchs? Is it hard for you to imagine your life without them?

But look at the Donbass. His people demolished their oligarchs and bosses, and then sent three funny letters and yours. For this they kill him now. And you rejoice in this as a weak-minded child. But why are you happy? Rejoice that free people harder to live than you? What do free people pay for their freedom with blood, life, and ruined cities? You still do not understand, the people of Ukraine, that all these months Donbass was bleeding FOR YOUR AND YOUR FREEDOM, for a life without oligarchs and corrupt bosses, for justice for everyone, not just for the elect.

But you were led to rave about the “terrorists”, “separatists” and Putin. You once again believed the promises of your oligarchs and bosses. You betrayed the ideals of your own Maidan. You are at the behest of those who recently were going to hang on lampposts, began to kill his own brothers in the South-East, imagining himself a hero.

You are systematically vyyuhivayu various crap about the Russians and Russia, but at the same time your oligarchs behind your back are conspiring with Moscow, bargaining for yourself personal preferences. That you do not have work, money and heat in the house, and the factories of your president work in an excellent way in "hellish" Russia, continuously replenishing his bank accounts. This is told to you about the Russian invasion of the Donbass, and at this time the Moscow leaders are trying to deprive the rebellious republics of their recalcitrant national leaders, and also to return to the region the people your leaders and oligarchs expelled from there.

At the top, among those who own power and huge money, nobody equally needs neither your Maidan, which was stolen from you, nor the popular revolution slandered in your eyes in the Donbass, which they are now trying to strangle by all possible means, nor a new country, in which you dream to live.

In fact, the people of Ukraine, you do not have such a big choice. Either you return to the Maidan to complete the once begun.

Or go to the militia of Donbass, to protect the popular revolution and on its wave to return to Kiev.

Either you will live as you have lived all these twenty years of the Ukrainian Ruins, remaining powerless, downtrodden slave under the heel of his bosses and oligarchs.

And remember, people of Ukraine, that the opportunity to choose from you will not be long. And if you do not make your choice now, others will make this choice for you.