The State Duma is considering a bill on private military companies

October 27 2014
63
Last week, the State Duma introduced a bill prepared by a deputy from the "Fair Russia" Gennady Nosovko. The bill concerns the creation of private military companies in Russia, by analogy with operating companies in a number of foreign (primarily Western) states. 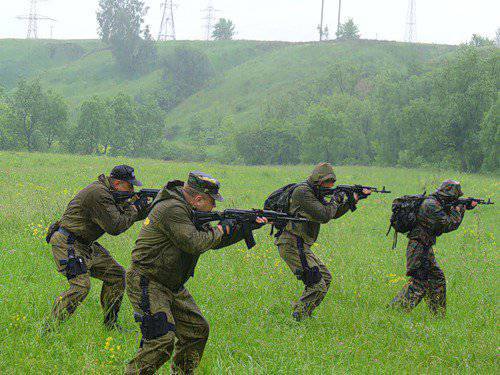 Gennady Nosovko quotes "Russian newspaper":
We are pushed to this geopolitical situation. Today the world has split, with only the West having private military companies. They are used to solve such specific tasks in third countries as the protection of the government, military bases, nuclear facilities — everywhere where the pro-Western state does not have a reliable professional army.

At the same time, the parliamentarian especially emphasizes that such companies will have to undergo strict licensing, after which they cannot be covered by the article 359 of the Criminal Code of the Russian Federation. This article is called "Mercenary." The note to this article defines who should be considered a mercenary:

If the bill submitted to the Lower House of the Federal Assembly is adopted, then article 359 will need to be amended to determine the lack of responsibility for the episodes of this article by representatives of private military companies.

What was the main emphasis in the preparation of the draft law on the creation of private security companies in Russia? The main focus is on the protection of property outside the Russian Federation. It would seem, and here private or state property and in fact private military formations? The fact is that from the very beginning of the existence of the Russian Federation as a sovereign state, foreign “partners” began to receive statements that if Russia or a large Russian company did not fulfill the next requirement of an international court (arbitration), then state property or private property would be arrested the basis of a new judgment.

History with the Swiss company “Noga” is memorable to many. The company, which was supposed to provide loans to Russia for the purchase of food, began, as they say, “to chemize” with finances. Russia was supposed to supply Leg to petrochemical products as a segment of payments, but it turned out that Swiss “partners” want to buy fuel oil and diesel fuel not at world prices, but with a fair discount. In some cases, Russia was demanded such a “discount” that it was cheaper to burn fuel oil on the spot.

When the Russian State Council announced a violation of contractual obligations by the Swiss, they quickly pointed a finger at the contact (and the contract, by the way, was signed by the then (1991 year) Deputy Chairman of the RSFSR Council of Ministers, Mr. Kulik), where it was stated that if Russia does not like something then this is her (Russia) problem. Moreover, the contract stated that all the claims of Russia must be resolved at the expense of Russia itself. And the soul flew to paradise ... Noga began to file a lawsuit, then to the Luxembourg court, then to the Stockholm arbitration, and, you know, everywhere it was expected to succeed. The judges also pointed a finger at the contract, pointing Russia to the fact that she herself had signed, she herself, and pay. But now the “independent” Stockholm arbitration does not point a finger at a contract signed by, for example, Ukraine, and does not oblige to pay for gas at $ 485 ... An interesting approach to arbitration cases, isn’t it ...

So, this very “Noga”, realizing that Russia will not pay the billions of dollars assigned by the courts in the form of “compensations” (well, there simply were no such funds in the Russian budget — someone had pockets in their pockets, but no budget ...), I decided to go the other way: I began to literally hunt Russian property abroad. Employees of “Foot” tried to take everything that they saw Russian: from bank accounts to sailboats (the sailboat “Sedov” was arrested in France in 2000), fighters and exhibition canvases of the Pushkin Museum. In the end (only a few years after their raider comfort), “Leg” was put in place, unblocking all Russian accounts and “releasing” the sailboat and the paintings. But as they say, the sediment remained.

And if since 1991, Russia’s blood has been spoiled, mostly by Noga, now it’s decided to take this path at the state level. There are arrests of accounts of Russian citizens abroad, threats are being made against Russian state property and so on, so on and so forth. Like, sanctions, gentlemen ...

So the deputy group (I don’t want to think that the group cares exclusively about their own financial interests) proposes to create private military companies with the appropriate equipment, at least so that some people do not have the desire to chop off a piece of Russian state property.

This practice takes place in relation to American PMCs, which began with the protection of oil pipelines and refineries, and then “developed” into full-fledged mini-armies, which are now operating where the US government sows “democracy”. We (Russia) should not talk about the opposition of domestic (potentially possible) PMCs to American ones, but it also doesn’t hurt to take advantage of certain experience of the “partners”.

What are good private military companies? By the fact that they are private, but at the same time, they are working “under the cover of” state authorities, and the authorities themselves remain as if on the sidelines - they say, we have nothing to do with this at all. The “friends of Russia” wanted to withdraw the Russian enterprise according to the “court decision”, but they met with a private military company, which is not so easy to cross over if it is properly equipped and its representatives are trained. "Squeeze" a fighter or a manufacturing company is unlikely to turn out once or twice.

But we must not forget that PMCs have significant drawbacks. If we take into account that the company is still private, and it works solely for money (certainly not for the idea), then it’s not an hour when someone offers more to the PMCs ... Will there be an offer that they can refuse? - that is the question.

In general, when considering a bill, deputies should not merge into a “voice” impulse without discussion, but weigh all the pros and cons of PMCs, emphasizing domestic conditions and objective reality.

And another thing: in order to ensure that foreign "friends" do not have a hand in Russian property in foreign countries, you must first remember that the majority of people who want to have a hand in domestic state property are located inside Russia ... And here it is PMC definitely not a panacea.