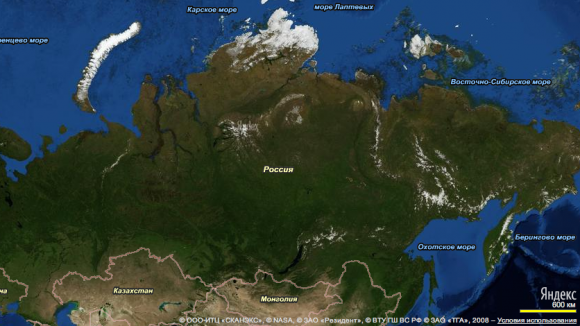 The Ninth Arbitration Court of Appeal 4 of August granted the appeal of the company “Skaneks”, which works with the data of remote sensing of the Earth, declaring illegal the restrictions imposed by Roscosmos in the license.

In 2008, ScanEx was licensed to receive, process and distribute Earth remote sensing data at Roscosmos. The document states that the operator can work with data with a resolution of at least 2 m per pixel. For comparison: “Yandex” now allows anyone who wants to use satellite images with a resolution of 0,6 meters per pixel. “Yandex” receives these pictures, including from ScanEx. At the same time, there is no fear at Yandex, because there are no documents prohibiting the publication of such data.

“At first we tried to clarify the situation for a long time without a trial,” says ScanEx representative Nadezhda Pupysheva. - There were consultations, letters of inquiry, meetings, but the question did not move from the spot. Having a license with restrictions, we received questions from foreign partners - it looked like we were engaged in illegal activities. Such restrictions on working with satellite imagery hamper the development of the entire remote sensing industry in Russia and its participants. Then we decided to resolve the situation through the courts.

At the beginning of 2010, ScanEx filed a lawsuit demanding to remove the restriction on receiving images of the Earth with a resolution greater than 2 from licensing terms. Defense, Ivanov reported to the president that there are no more restrictions on the resolution of satellite images in Russia (2006 August 30, Ivanov, by order of the Minister of Defense, removed the restrictions on images better than 2006 per pixel).

Solve the puzzle "ScanEx" and tried with the help of an open letter to the current head of the defense department Anatoly Serdyukov. However, the Ministry of Defense responded that Russia has not only military secrets, but also economic and technical ones. And therefore, even if the Ministry of Defense lifted the ban on detailed shooting, Roskosmos can introduce it, guided by the reasons behind the topic of defense.

In July, Moscow's 2010 arbitration dismissed the suit of ScanEx, the appellate court upheld the decision. However, the cassation instance sent the case to Moscow arbitration for a new consideration. In May, the Moscow Arbitration Court 2011 rejected the suit of ScanEx against Roscosmos again, demanding that the ban on a more accurate satellite imagery be removed from the company's license. And "Skaneks" again filed an appeal and this time won.

Roscosmos declined to comment on the court decision. “When we receive an official document on the court’s decision, then we will think about it,” Alexey Kuznetsov, head of the Roscosmos press service, told Izvestia.

The interviewed experts consider the Russian regulations in the field of remote sensing control to be confusing, and the restrictions of Roskosmos as illegal.

“There is a resolution of the Russian government No. 326 of 28 of May 2007 of the year“ On the procedure for receiving, using and submitting geospatial information, ”explains lawyer Andrei Balagurov, executive director of the association Earth from Space. - It says that anything that is worse than 2 m per pixel is not a secret. But it does not say that everything that details 2 m is a secret. This duality allows us to interpret the document in different ways and introduce incomprehensible conditions in the license.

“I sincerely believe that the situation in this matter will change in the foreseeable future,” shared the director general of Scanex, Vladimir Gershenzon, with Izvestia. - The courts got off with procedural excuses, and, despite the long history The question has never been a substantive consideration. And we are fighting for a precedent, so that there is no self-will in the interpretation of laws, so that geoinformatics can develop normally and is not so opportunisticly regulated.

“Roscosmos has made sabotage with its own conditions,” complains Ivan Moiseyev, head of the Institute for Space Policy. - Either this decision was simply illiterate, or it was made to please other companies that also work in this industry.

We are in Yandex Zen
I can see everything from above, and you know
Yandex will make the Crimea Russian-Ukrainian
Add a comment
Information
Dear reader, to leave comments on the publication, you must to register.