“The big war is on the current political agenda” 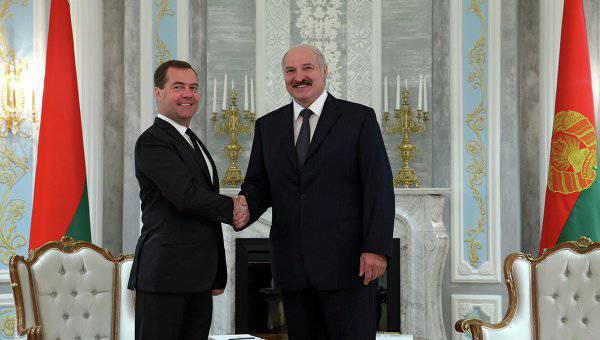 Russia should be ready for it

A meeting of the Council of Ministers of the Union State of Russia and Belarus took place the other day. Dmitry Medvedev praised the agreements reached.

However, shortly before this, a press conference was held by Alexander Lukashenko, during which the Belarusian leader made a number of ambiguous statements about the relations between Moscow and Minsk. In diplomatic practice, imprudent remarks are not accepted, especially on the eve of important negotiations.

At the same time, Lukashenko stressed that his words are pulled out of context: “But the misfortune of individual politicians, and most of all the media in Russia, and the blame is that they begin to pull out of the context of my reasoning — either the first half is served or the second half.

In this regard, we again turn to the topic of real relations between Moscow and Minsk. Today the situation is being analyzed by a political scientist, doctor historical Vardan Baghdasaryan

In the Russian patriotic camp began talking about the "betrayal" Farther

- Lukashenko has long acted as one of the main symbolic figures for the Russian patriotic movement. In Belarus, headed by him, in dissonance with Russia, many components of the Soviet system of government remained. Lukashenko was the first in the post-Soviet space to enter a political clinch with the West, for which he was defined as the “last tyrant of Europe”, and Belarus was subjected to sanctions.

In the past few years, Russia and Putin have gone the way Belarus and Lukashenko traveled in relations with the West in the past few years. The Belarusian president resolutely suppressed the “fifth column” in the republic. Disruption of the plans of the “cornflower revolution” was the first reflection of the orange threat in the space of the former USSR. Lukashenko was the first, even under Yeltsin, to initiate the idea of ​​a Russian-Belarusian reintegration project ...

And so, the idol of the Russian patriotic designates, at a minimum, its distancing from the new foreign policy of Russia. This course is expressed by a simple trivial formula - “give change”, “kick back”. Earlier, Belarus, despite Russian pressure, refuses to recognize the independence of Abkhazia and South Ossetia. Now the Belarusian president expresses his disagreement with regard to the Russian rally of the annexation of the Crimea. So allies do not behave.

In the Russian patriotic camp began talking about the "betrayal" Farther. But labeling a little constructive. Let us try to find an explanation for the strangeness of the foreign policy position of the Belarusian leader.

Obviously, for the West, Lukashenko is an irritant. Bleeding with him is unlikely. If we assume that the struggle of the West to overthrow the Lukashenka regime will continue, then the question of what format it will be conducted should be answered.

There are three classic versions of the interstate struggle: military actions; blockade; organization of a coup. The method of blockade through the regime of imposing sanctions against Belarus has already been applied. Its application turned out only to strengthen the economic orientation of the republic to Russia and China.

The tactic of organizing the “color revolution” was also used. She, as you know, also failed. As a result of the victory over the “Orangeists”, the Lukashenko regime only grew stronger. As the Belarusian president himself said at a meeting with Russian journalists, the grant support of the opposition in Belarus from the West has now actually been phased out.

In the arsenal of external opponents of the Belarusian president, the only tool that has not been used so far is war. In the wake of 2014, the military scenario does not seem incredible. Lukashenko so directly and stated his fears - the threat of Belarus being drawn into the funnel of war.

The proclamation of the sovereignty of Abkhazia and South Ossetia, and to an even greater degree the annexation of Crimea to Russia, obviously creates, in the eyes of Lukashenko, an indirect threat to Belarus.

Lukashenko is obviously trying to avoid a military scenario

Polish claims extend to all of Western Belarus along the 1939 borders of the year. The seriousness of these claims in the understanding of Lukashenko says his entailing a diplomatic scandal speech on this subject.

“At the last event there was a thousand diplomatic quirks from their side,” the Belarusian president collapses at the position of Warsaw, which was manifested during the Eastern Partnership summit. - This is Poland! Well they are great figures! They sleep and see that the border of Poland passes near Minsk, they can’t agree with the fact that the border is beyond Grodno ”.

In Ukraine, during rallies of nationalists, claims to the Belarusian Beresteyshchina and Gomel oblast are articulated. I recall the history of the struggle of Bandera in Belarus for the restoration of the "true" within its borders of "Great Ukraine". The cautious Lukashenko is obviously trying to avoid a military scenario. It is clear that to definitely side with Russia means for Belarus in this prospect to be at the epicenter of the global war.

For Russia, from this analysis it follows, at a minimum, the conclusion that a big war is on the current political agenda. And this probable scenario must be forced training.

The situation is reminiscent of the one that evolved on the eve of world wars. Accordingly, the main challenge for Russia is to be in time. Not least this means the strengthening of the Russian geopolitical and military presence on the western frontiers.