Chancellor in the Fog 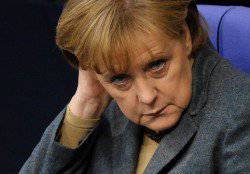 Of all the countries of Western Europe in the current crisis, Germany remains not only the most prosperous, but also the most dynamic. Despite the fact that the crisis in the eurozone is far from over, the German economy continues to show steady growth, the Germans are literally keeping up with the Chinese in foreign trade.
That, however, is not surprising: a significant part of household appliances and equipment assembled in Chinese factories consists of German components.

From this, of course, it does not follow that Germany did not suffer from the crisis in any way. Wages, both real and nominal, declined significantly in 2008-2010 years, but have not grown much since then. Many workers were forced to move to part-time or accept the reduction in earnings in order to keep their jobs. The trade unions and the government went in this case to an agreement with entrepreneurs. And it must be admitted that the agreement was effective in the short term: the unemployment rate in Germany remains one of the lowest in the West.

Which, in turn, determines the stability of the position of Angela Merkel as Federal Chancellor.

Compatriots do not like this East German lady too much, and the citizens of the neighboring European countries simply hate.
But everyone has become accustomed to her and admit that she knows her business. A. Merkel for citizens of a federative republic is something like a necessary evil. With her somehow calmer.

Germany’s relative prosperity, however, relies too clearly on the exploitation of other EU countries. It is in German banks that ultimately settles the aid sent by Brussels to "rescue" the crashing economies of Spain and Greece. This is where capital is exported from neighboring countries. The financial system of the eurozone turned out to be a giant vacuum cleaner pumping funds from less developed and less successful countries to a dynamically developing and stable Germany.

As a result of this overflow of funds, unsuccessful states sink to the bottom even faster. And the German government, which receives taxes from its growing business, sends some of these funds back to countries in distress through state aid channels. This allows for some - and, by the way, quite a long time - to keep them afloat and to ensure further flow of funds through private channels to Germany. True, in the countries of Southern Europe there is a growing confidence that “the Germans are robbing us,” while in Germany itself the belief is growing that “we are feeding everyone.” But since the system is at least working, no one offers any alternatives. The Greek crisis has come to some semblance of stabilization, and even the left-wing radical party SYRIZA, which claims power in the event of new elections, does not propose any significant measures to change the rules of the game.

Against this background, the only, but more noticeable spot obscuring the clear sky of German politics is the situation in Ukraine. German newspapers get more and more unpleasant Newsclearly contrary to the official version of events.

The confrontation with Russia turns into quite noticeable losses, and the help of the ruling group in Kiev does not bring the expected success: the situation is getting worse and worse.
It is not difficult to guess that it was Germany, as the leading power of the European Union, who was at the helm of the Ukrainian policy of Brussels. The association agreement with the EU means the death sentence of Ukrainian industry, after which the millions of residents of this country are left with the role of consumers of German products and guest workers at German factories. True, for ordinary Germans, in contrast to the "captains of the industry," this prospect does not look very attractive either. After all, several million new migrant workers in conditions where rapid industrial growth is not observed turn into competitors in the labor market, and in the future we will have to expect a new wage cut. Actually, this is why the Ukrainian policy of Berlin and Brussels in the German society itself did not initially cause any enthusiasm.

It was reflected at the political level. Among all the Western Leftists, it was the Left Party of Germany who most strongly opposed the coup in Kiev and the subsequent support of the West for the punitive operation against Novorossia. The presence of the ultra-right in the composition of the new Kiev government could not but cause indignation of the intelligentsia, for which, for obvious reasons, the topic of Nazism remains of fundamental importance, respectively, anti-fascism is one of the fundamental values.

Likewise, attempts to strengthen anti-Russian sentiments in German society were not crowned with success. Still, here is still too well remembered history and they know what could be in conflict with Russia.

The discontent intensified even more when it became clear that the Ukrainian policy of Berlin, instead of the expected benefits, brings only losses. Sanctions against Russia hit the German enterprises themselves. More damage was caused by Moscow’s retaliatory sanctions. Moreover, it is not limited to direct losses for German agrofirms that have lost access to Russian markets. EU partners who have suffered from Russian sanctions require support and compensation, and all of this will have to be paid for Germany again, since it remains the main donor of the EU.

Helping the new government in Kiev is also expensive.

In addition, by contacting one of the most corrupt regimes in Europe - and, perhaps, in the world - German officials are unable to understand how much of the assistance provided really goes towards established goals, and how much is being stolen.
The principal difference from the situation with the help sent to Southern Europe is that if in the case of Spain or Greece German expenses are compensated by a much more powerful flow of funds going in the opposite direction, then Ukraine turns into a black hole for the German economy more and more resources without any return.

It is not surprising that the thought of revising the course in the Ukrainian question is visited by many heads in Berlin. And not only among the left. However, in order to make this turn in practice, the government of the Bundeskanzler needs to solve two problems, neither of which seems to be solved today.

The first problem is the reputation of the Bundeskanzler. Too obviously, too quickly and too rashly supported by Angela Merkel's new regime in Kiev. The miscalculation was obvious - both in terms of overestimating the chances of the Ukrainian nationalists, and in terms of underestimating Russia, its ability to resist Western policy. Admitting these mistakes now means seriously undermining the credibility of the current cabinet. As already mentioned, no one especially loves Frau Merkel, but they are afraid of her and trust her. If now she will be forced to publicly admit the defeat of her policy, all those who have saved their anger against her for many years, both inside and outside Germany, will not fail to take advantage of it. She will immediately be remembered for all other real and imaginary sins. And most importantly, it will cease to obey and fear: “Akela has missed!”.

Another problem is even worse. This is a relationship with Washington.

Over the past years, when Frau Merkel was in power, in Berlin, the US-German relations looked stable and durable. This does not mean that the serious contradictions that surfaced during the years of chancellorship of Gerhard Schroeder have disappeared somewhere. Not at all, the German elites are well aware of the differences between their own interests and those of the ruling circles of the United States, and they are not going to sacrifice their benefits and plans at all.

But, unlike the Social Democrat G. Schroeder, who at the beginning of the Iraq war was ready to come out with an open criticism of Washington and tried to rally his own coalition around Germany, the conservative government of A. Merkel prefers to combine backstage negotiations with NATO’s declarative commitment. Berlin does not intend to quarrel openly with its American partners. Moreover, in exchange for this loyalty, he always expects to receive US support in the event of any European crises.

But the crisis arose in Ukraine, and it was discovered that American allied aid turns the German ruling class into hostages. Unlike Germany, the American ruling circles can afford to further escalate the crisis. They do not bear much damage from it. It is the Germans who pay the bills, it is the German enterprises that incur losses because of the sanctions. Such a weakening of an ally, who is also a competitor in combination, can only please the decision makers in Washington.

While Berlin is slowly trying to find points of support in order to get out of the “Ukrainian swamp”, Washington is doing everything possible so that the Europeans will plunge there even deeper.
True, the long-term results of such a policy may turn out to be so deplorable that the ruling circles of the USA will not like it either. Indeed, the deepening of the political crisis against the background of unresolved economic problems is fraught with serious upheavals and, who knows, maybe even the collapse of the European Union. But now in Washington, few people think strategically. And the tactical benefits are too obvious.

Not daring to openly confront the United States, and not feeling the determination to go further in its wake, the government of A. Merkel finds itself in a fog of uncertainty. It will have to move forward by touch, avoiding sudden movements, try to adjust its course without changing it, and hope that Moscow’s concessions will allow them to get out of this whole story if not winners, then at least without shame. But it is not at all obvious that all these problems of the German government will be taken into account by Washington, not to mention Moscow or, especially, by political forces in Ukraine.

So, the Ukrainian crisis is gradually becoming the intra-German crisis.