Russia is actively working to create a new anti-aircraft missile system 42C6 "Morpheus" of short range. This was stated by Colonel-General Alexander Zelin, Commander-in-Chief of the Russian Air Force. "The system is designed to protect military facilities, has both active and passive means of warfare," - explained the commander in chief, while noting that "the new complex" Morfei "will destroy absolutely everything that moves in the airspace within a radius of five kilometers ". 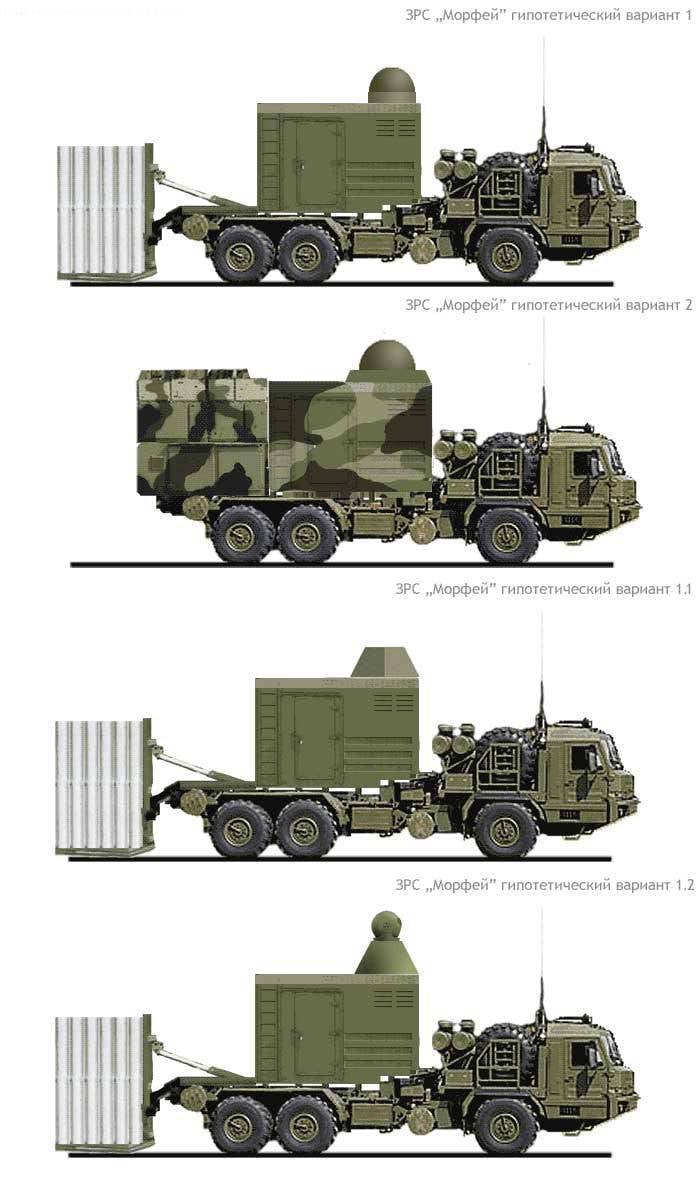 Control system and guidance:
- the multipurpose 29Я6 radar, developed within the framework of the Morfey design and development works, is installed on the 70Н6 combat vehicle and according to unconfirmed data it is a circular radar with a PAR or AFAR with a hemispherical dome lens. It is highly likely that the command and control system based on the operational data of the complex’s radar is used in the missile defense system. Also, an infrared station will be installed on the 70H6 combat vehicle;
- command post ZRK - combat vehicle on the chassis BAZ or "Tiger".

The launcher is mobile with radar 29Я6 on the chassis BAZ (4х4) - 70Н6. ADMS is not used in the dynamics of movement. Missiles are launched from vertical launch containers. The prototype chassis BAZ-69092-024 was completely ready for work in May 2010 g.

The rocket used in the complex allegedly 9М338К, which is mentioned in the Almaz-Antey Air Defense Report for the period of 2008 of the year in the context of the ROC Tor-M2. The range of the missile is up to 6 km with a height of destruction - up to 3,5 km.

In April, 2010, Igor Ashurbeyli, then the general director of the Almaz-Antey air defense system, said that the Morfei air defense missile system will be part of the extended aerospace defense together with the Vityaz medium-range complex. In addition, the air defense system "Vityaz" will be able to detect and fire a greater number of targets. Creation of the new A / C system in Russia began this year. According to the plan presented by the General Staff of the Armed Forces of Russia, the air defense and anti-missile defense systems of the Morfey air defense system, C-400 Triumph, Vityaz and C-500 Triumphator-M will be included in the EKR system. As the Chief of the General Staff, Army General Nikolai Makarov, said, the unified system will create an “umbrella” that will reliably cover Russia from possible “ballistic missiles and all-round cruise missiles, including from the smallest possible altitudes, regardless of time and situation.”

Russia today is significantly superior to the United States in terms of the technical level of air defense systems and helicopters, but at the same time it is quite losing in terms of the supply of unmanned aerial vehicles. This opinion was expressed during a meeting with journalists by Commander-in-Chief of the Russian Air Force A. Zelin.

He noted that the domestic air defense systems such as C-300 and C-400 are many times superior to the main American Patriot system. Also, in Russia, active work is underway to create new C-500, Vityaz and Morfey complexes.

According to the Air Force Commander-in-Chief, in terms of strike aircraft, comparative parity is observed between Russia and the United States. However, Russia is inferior in quantity of military equipment in strategic aviation. “However, with the advent of modern missiles, which are already in service with the armed forces, our potentials are being equalized,” the Air Force Commander-in-Chief summed up.