Lockheed Martin is preparing a revolution in energy. Russia does not believe in it

October 24 2014
85
The American Skunk Works laboratory in 2024 is preparing to present a production version of a fusion reactor, which theoretically could change the face of all modern energy in the world. It is reported that the size of a new fusion reactor with a truck and a power of 100 MW is useful both on our planet and in space. The American company Lockheed Martin revealed the details of its new project T4 to develop a powerful and compact fusion reactor CFR (Dubbed the compact fusion reactor) recently. It is reported that this breakthrough technology in its field is created in the Skunk Works laboratory, which specializes in secret military developments. Therefore, it is not surprising that nothing was known about the project for so long.


Only in 2013, the company lifted the veil of secrecy over its project T4, telling about its existence. Now, however, the public has become aware of some details concerning the new energy system. The company Lockheed Martin promises that the finished prototype of the new reactor will be made by them in 5 years, and the first production samples will start to work in a decade. It is reported that, unlike modern prototypes of fusion reactors, the CFR reactor will be 20 times more powerful and 10 times smaller.

Lockheed Martin has been conducting closed-door experiments on nuclear technology over the past 60 years, but has now decided to let the public know about them in order to attract public and private partners. It is worth noting that experts attribute this "fascination" of one of the largest suppliers of the Pentagon to alternative energy in that the US is engaged in reducing military spending.

Currently, Lockheed Martin is one of the world's largest companies, specializing in the production of various military and aerospace equipment. The company employs more than 113 thousands of people, and its sales in 2013 alone were estimated at 45,4 billion dollars. Starting in the middle of 2000, Lockheed Martin has been working on the development of the reusable Orion spacecraft, which should deliver people and cargo to the ISS, the Moon, and, possibly, to the Red Planet in the future. 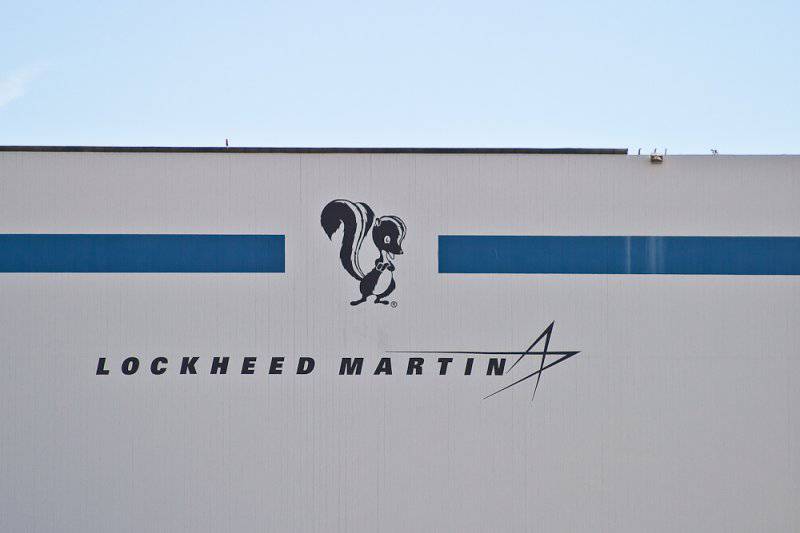 Equipping a spacecraft with a compact thermonuclear installation is a rather tempting idea. At the same time, modern nuclear reactors are quite expensive and bulky in size. For example, the most famous project in this area - ITER research and development - with a projected power of 500 MW costs about 50 billion dollars. At the same time, it has a height of more than 30 meters and after the end of construction will weigh 23 000 tons. At the same time, the Lockheed Martin serial reactor can be transported using road transport.

Until now, most of the fusion reactor designs are based on the principles of tokamak, which was developed by USSR physicists in the 1950s. In reactors of this type, the plasma ring is held by a powerful magnetic field created by superconducting magnets. Another set of magnets is responsible for inducing the current inside the plasma itself and for maintaining the thermonuclear reaction. The problem with tokomaks is that they produce not much more energy than is spent on powering the magnets used, their profitability tends to zero.

In the Lockheed Martin Corporation’s proposed CFR reactor, the plasma is held by a special geometric shape throughout the reactor chamber. In CFR, superconducting magnets are also used, but they generate a magnetic field around the outer boundary of the chamber, so there is no need to accurately position the magnetic field lines relative to the plasma, and these magnets themselves are outside the boundaries of the active zone. This increases the amount of plasma (and therefore the energy output). And the stronger the plasma tends to get out, the stronger the magnetic field is trying to bring it back.

It is reported that the reactor should combine the best solutions that were created for different fusion reactor projects. For example, special magnetic mirrors are located at the ends of the cylindrical active zone of a reactor, which can reflect a substantial part of plasma particles. In addition, a recirculation system was created that is similar to that used in the Polywell pilot reactor. With the help of a magnetic field, this system captures electrons and creates zones into which positive ions rush. Here they collide among themselves and maintain a continuous process of thermonuclear reaction. All this significantly increases the efficiency of the reactor. 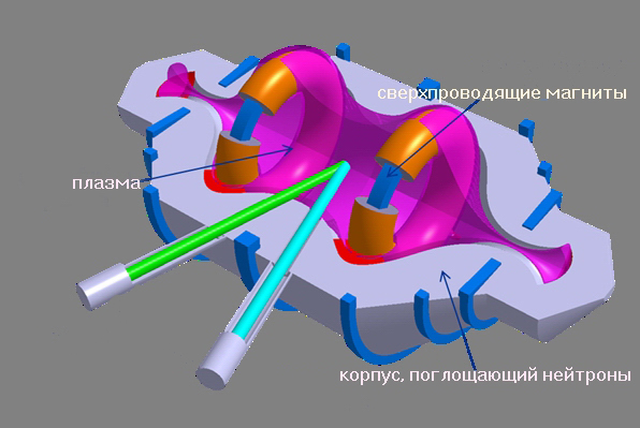 Lockheed Martin plans to use tritium and deuterium as fuel, which are placed in the reactor core in the form of gas. During the course of the fusion reaction, helium-4 is formed and electrons are released, which are responsible for heating the walls of the reactor. Next comes the traditional scheme of steam pipes and heat exchangers.

At the moment, the project of the American Aerospace Corporation is at the stage of work on the creation of a prototype, and a full-fledged prototype should be ready in 5 years. According to Lockheed Martin aviation engineer Thomas McGuire, a working prototype will have to confirm the performance of the proposed design. In addition, he must ensure the ignition of the plasma and the maintenance of the process of thermonuclear reaction for 10 seconds. Even later, 5 years after the creation of a working prototype, that is, by 2024, American engineers expect to produce the first series of CFR fusion reactors that can be used in industry.

It is reported that the early series reactors will have small dimensions so that they can be placed in transportable containers 7x13 meters. With such sizes, which are quite modest for fusion reactors, they will be able to produce a record amount of energy: about 100 MW. Taking into account the parameters of the first series of CFR reactors, it is easy to see that the Pentagon is interested in work in this direction. The US military needs compact and very powerful sources of energy for the development and improvement of advanced laser and microwave weapons.

At the same time, in the civilian market, such thermonuclear reactors are able to effect a real revolution. A compact and safe thermonuclear reactor of similar capacity can provide energy for up to 80 thousands of homes. At the same time, it will be very easy to integrate it into modern electrical networks (as opposed to such energy sources as solar panels and wind turbines). In addition to all of the above, the CFR is almost an ideal power plant for promising spacecraft. With the help of new CFR-based engines, manned spacecraft will be able to fly much faster to Mars. 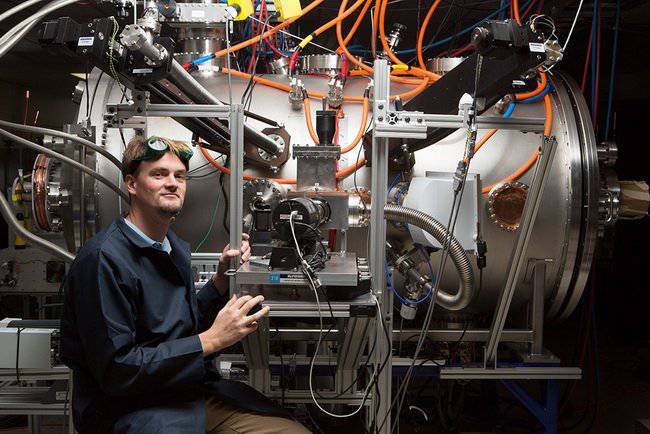 In addition to Lockheed Martin, a team of scientists from an international project under the acronym ITER / International Thermonuclear Experimental Reactor is currently actively engaged in research in the field of thermonuclear fusion. The results of their activities are currently far from the announced successes that were made by the aerospace corporation. For this reason, the veracity of the popular Lockheed Martin information is being questioned, and has already caused a lot of controversy in academic circles. Russian scientists do not really believe the published materials.

For example, the head of the Russian ITER agency, Anatoly Krasilnikov, publicly stated that the scientific breakthrough that was voiced by Lockheed Martin experts is actually empty words that have nothing to do with real life. The fact that the United States is preparing to begin creating a prototype thermonuclear reactor with the stated dimensions seems to Mr. Krasilnikov ordinary PR. According to Anatoly Krasilnikov, science at the present stage of development is not able to design a safe and fully functioning fusion reactor of such small size.

As an argument, he cited the fact that today honored nuclear physicists from the USA, China, EU countries, Russia, Japan, India and South Korea are working on the international ITER project, but even the best minds of modern science gathered together hope to get the first plasma from ITER in the best case to 2023 year. In this case, even speech does not go about any compactness of the prototype reactor.

Naturally, in the future the opportunity to develop a small-sized installation will become obvious, but this will not happen in the next few years. Whereas in Lockheed Martin declare that they can show the real model of the reactor in a year. And of course, it’s hard to believe, given that the engineers of the company are working on a project of this level in isolation from other scientists. Anatoly Krasilnikov is confident that the promises of representatives of Lockheed Martin to show the prototype will remain just promises. 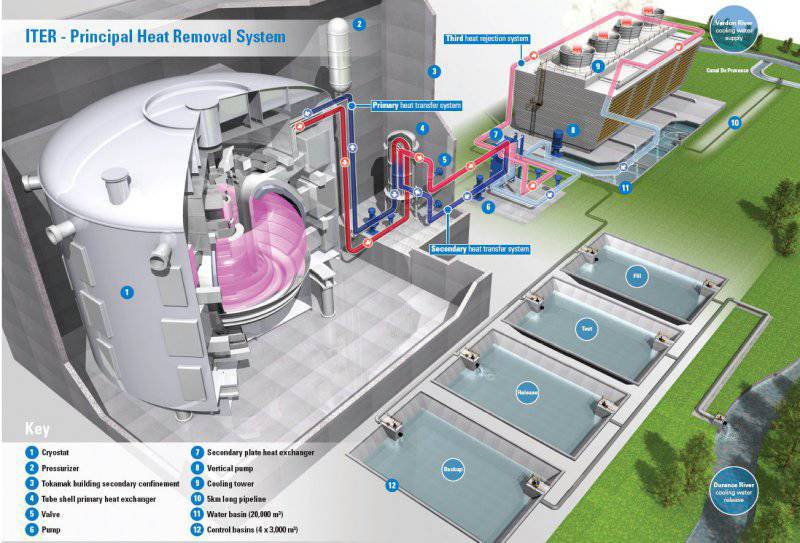 He notes that leading engineers have been working on the creation of the first fusion reactor for more than a decade, and this process implies an obligatory exchange of experience. At the same time promising developments and developments become available to other scientists. The breakthrough of specialists, the details of which was not known to anyone, seems to be very much exaggerated. Most likely, he pursues not scientific goals, but commercial ones. They want to attract attention, attract additional financial resources, and their statements are an advertising campaign.

Yevgeny Velikhov, president of the Kurchatov Institute, spoke about the American project even more sharply, commenting on the news with the words "Lockheed Martin Fantasies". He has no information about any real successes in the creation of a compact fusion reactor by experts of the American corporation, which would be supported by facts. According to Evgeny Velikhov, nobody in the world is informed about the American invention, except for the American company itself, the significant technical details of the project have not been disclosed, but the wave of discussion in the media has already risen.