"Liner" on the submarines of the Russian Navy 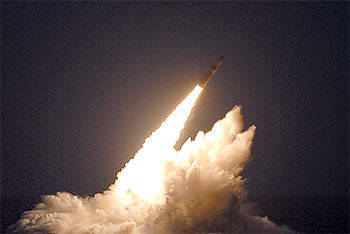 The new rocket surpasses the majority of Russian and foreign analogues in its characteristics.


New State Rocket Center. Makeeva - Liner, a sea-based strategic rocket based on the use of solid fuel. The combat load of a new type of weapon is twice the maximum for the existing P-30 “Bulava” ballistic missile, which is used in submarines. The first tests of the rocket were conducted on 20 in May of this year, experts recognized them as successful. Although according to official data it was reported that it was the launch of the Blue, a ballistic missile, at present this missile is the main weapon for the submarines of the Dolphin 667BDRM project. The missile was launched from the nuclear submarine K-84 "Ekaterinburg".

The “blue” in question is a liquid-fuel based rocket. Its development is also engaged in SRC them. Makeeva, adopted a missile adopted in 2007 year. The rocket is characterized by a high degree of reliability, despite this, the leaders of the Ministry of Defense of the Russian Federation and the command of the Navy have repeatedly stated that it has long been outdated. However, this statement is more correctly attributed to the submarines of the 667 BRDM project, and not to their weapons.

In the late nineties, the command approved the idea presented by the Moscow Thermal Engineering Institute, which proposed the development of sea-based ballistic missiles based on solid fuel. This idea was personally promoted by Yury Solomonov, the head of MIT. Once he created the notorious "Topol", and at that time was able to convince the high authorities that the adaptation of its missiles for arming submarines would occur in a short time and more economically than the creation of new ones. As a result of numerous and expensive experiments, often unsuccessful, a solid-fuel Bulava rocket was created, which the media have already written about many times.

The result of many failures was the removal of Solomonov from the work on the project, leaving him the opportunity to deal only with his brainchild - Topol, conducting their deep modification with the new Yars-divided warhead. Technologies from the production of Bulava have changed significantly, with the result that the latest launches are successful. At the same time, the Borey 955 submarines, which are designed specifically for the Bulava missiles, are being built. After all, until recently, they were seriously talking about the prospect of the Navy to get powerful nuclear submarines worth hundreds of billions and remain without weapons for them. The first successful launch of the Bulava with a Borey-class submarine "Yuri Dolgoruky" took place on June 28. Previously, all launches occurred with the submarine "Dmitry Donskoy" (class "Shark").

And now the State rocket center named after Makeev, a long-time competitor of MIT, declares that its new development, the Liner, is much more powerful than the Bulava. Moreover, MIT has always argued that the “Mace” is capable of bearing the load of six to ten nuclear units up to 150 kilotons each, and the SRC them. Makeeva states that in reality their number does not exceed six blocks of a small power class. The “liner” can carry from nine to twelve blocks, that is, one and a half to two times more, besides, the new rocket can be equipped at the same time with combat units of different power.

The Liner solid propellant rocket surpasses all existing missiles of this type developed in Great Britain, China, USA, France and Russia itself in its ratio of the mass of the combat load and its starting mass. Combat equipment, including four blocks belonging to the middle class of power, does not lag behind in terms of START-3 from the American Trident-2, which is also four-block.

The missile center reports that the Sineva and Liner missile systems will ensure the existence of the northwestern submarine grouping of the 667BDRM project for a period of 35-40 years, that is, almost to the year 2030. In addition, several weapon options will make it possible to respond to changes in the military-political conditions.

One of the main representatives of the Russian military department said that “Liner” and “Bulava” are incorrect to compare, since the first is a solid-fuel version of the Sineva RSM-54. The Sineva liquid fuel engine already in service is superior in power and range to the solid fuel Bulava. Despite this, it was decided to use solid-fuel marine ballistic missiles in the future. But liquid fuels will not be immediately withdrawn from service, since they are used by submarines of project 667 BDRM. Therefore, the improvement of the Sineva missiles, including those in the Liner direction, will allow these submarine missile carriers to remain part of the combat fleet for the years that the transition to the newest Boreas will take.
Ctrl Enter

We are in Yandex Zen
Missile attack on Europe: myth or reality?
Strategic missile "Liner" has great opportunities compared to "Blue"
11 comments
Information
Dear reader, to leave comments on the publication, you must to register.