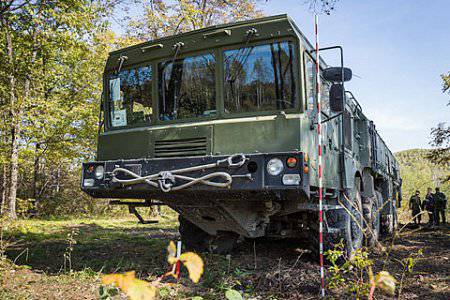 US congressmen wrote a letter to US President Barack Obama in which they expressed concern about the deployment of operational-strategic Tu-22М3 bombers and modern Iskander-M missile systems by Russia in Crimea. Both are capable of carrying precision and nuclear weapon.

Politicians from Washington claim that this is being done ostensibly in a foreign territory and in violation of the Medium and Small Range Missile Treaty (DRDMM), since, according to the head of the subcommittee of the lower house of the US tactical air and ground forces, Iskander-M capable of striking with high-precision cruise missiles P-500 at a distance of up to 2600 km.

The RF Ministry of Defense does not yet confirm or refute this information. Although two months ago, Deputy Defense Minister Anatoly Antonov had already stated that the Americans’ allegations of Moscow’s violation of the INF Treaty "are part of the anti-Russian campaign launched by Washington because of events in Ukraine." Last Monday, Russian Foreign Minister Sergey Lavrov also spoke in the same vein. Meanwhile, the intensity of passions around this topic is not decreasing, and now, after the next statements of the Americans in connection with the military arrangement of the Crimea, various forecasts are circulating among experts about what kind of defense Russia will build on the peninsula. Most experts agree that nothing prevents us from placing on the peninsula a strategic Aviation, and Iskanders, and other types of weapons. Crimea is now Russian territory, and in accordance with Russian laws any military infrastructure can be formed here, including Moscow entitled to deploy nuclear weapons here, as it was during the Soviet era.

But let's think about the question: why should the Americans inflate talk on this topic? To reveal Russian military secrets or to once again expose Russia to the world community as a potential aggressor? It seems that both are present here. And, of course, a letter from Obama to Congress about the deployment of weapons in the Crimea is an important element of the information war. Meanwhile, apparently, the Crimea is hardly threatened with excessive militarization. Rather, there will be the principle of optimality.

From the point of view of military strategy, the territory of Crimea is a certain springboard, which has somewhat advanced towards the borders of NATO. But a practically similar alignment of forces between the Russian Federation and NATO existed earlier, since, according to the Russian-Ukrainian agreements, the main forces of the Black Sea have already been deployed on the peninsula fleet. True, now the Black Sea Fleet in the Crimea can be strengthened by strategic aviation, a more powerful surface and submarine fleet, which can be armed with nuclear weapons, which the Americans are so afraid of. But where are they and where are we?

For Russia, the possibility of placing nuclear weapons on the carriers of the Black Sea Fleet is a forced and generally asymmetric response. Americans are ready to use drone drone near the borders of the Russian Federation and in the water area of ​​the Black Sea, which fall under the definition of ground-based cruise missiles contained in the INF Treaty. According to the Ministry of Foreign Affairs of the Russian Federation, “recently, the topic of the Mk-41 launchers, which the United States intends to deploy in Poland and Romania, has acquired particular urgency. These installations can be used to launch medium-range cruise missiles, and their appearance on land will be a gross violation of the INF Treaty. ”

Of course, Russia needs to respond to such threats. But Tu-22М3 is not necessary to be placed on a permanent basis in the Crimea. The airfield near Dzhankoy, where these aircraft were based at the time of the USSR, can be used as a hop airfield. And the main basing of bombers may be outside the peninsula. For the same purposes, apparently, the airfield in the Belarusian Bobruisk will be used in the Polish direction (see NG from 16.10.14).

It is no secret that until 1996, the Central Base for the storage of nuclear weapons, known as the “Theodosia-13” facility, operated not far from Sudak. It contained nuclear ammunition (YaBP) for artillery shells, torpedoes of submarines, air-launched and sea-based cruise missiles (ALCM and SLCM), etc. But now it is expensive and inappropriate to reanimate this object. In the threatened period, nuclear warheads for carriers in the Crimea may be supplied from other nuclear-technical storage facilities. Moreover, in recent years, the role of tactical nuclear weapons in the modern war has diminished. And, judging by open sources, in the post-Soviet time in Russia, new types of high-precision weapons were delivered to the troops, which by their destructive factors are not inferior to the nuclear weapons.

By the way, the main submarine forces of the Black Sea Fleet will also not be based in the Crimea. According to Navy Commander-in-Chief Viktor Chirkov, the backbone of these forces will be deployed at the Novorossiysk naval base. Now the corresponding infrastructure is being built there. Russian submarines equipped with SLCM and torpedoes with nuclear warheads, of course, will be a headache for Americans and other NATO countries. But in the current situation it could not be otherwise.