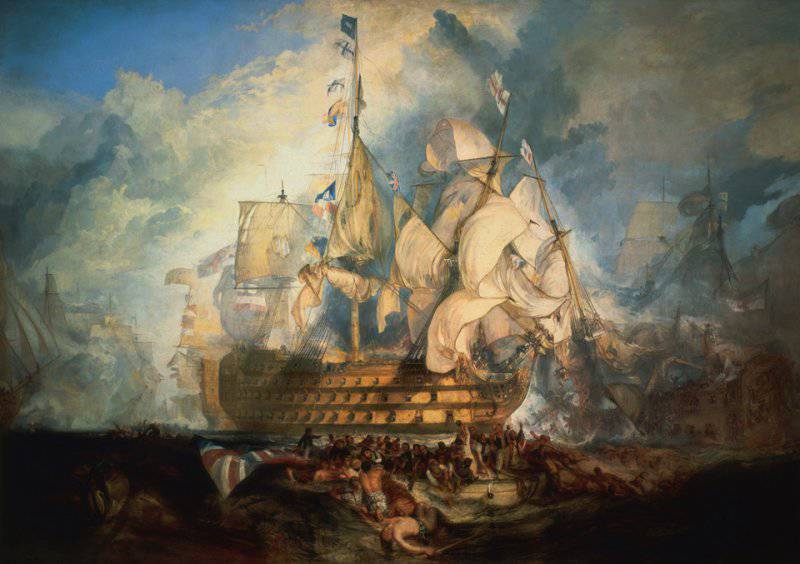 On October 21, 1805, the famous Battle of Trafalgar took place between English and French-Spanish fleets - one of the most epic sea battles in stories. As you know, it was the last major naval battle of France, except for Mers-el-Kebir, more reminiscent of the beating of babies. And this battle the French with the Spaniards lost “dry”, with a crushing score, losing the 22 battleship, the vast majority of whom surrendered. The British did not lose a single ship, and their irretrievable damage in personnel was 24 times less than their opponents.
Trafalgar put the final point in France’s attempts to become the leading maritime power, having won this title from the "Mistress of the Seas" - Great Britain. But, despite some episodic successes, it did not work out. From the beginning of the 18th century, the French fleet invariably lost all the more or less significant battles to the English. However, whatever one may say, geopolitics' reasoning about geographical determinism, tellurocracies and thalassocracies is by no means unfounded.

Next is a selection of paintings and book illustrations that give a visual representation of both the Battle of Trafalgar itself and its participants. 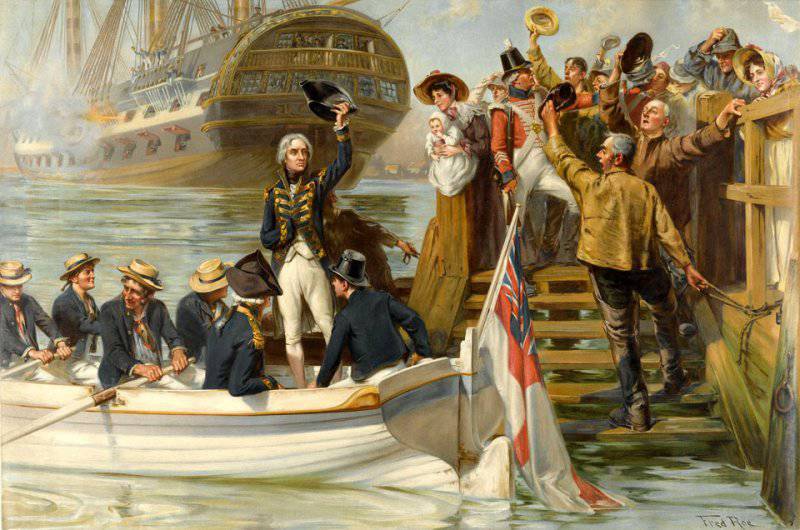 Farewell scene with Admiral Nelson, sent to beat the French. In the center - his mistress - Lady Hamilton, perhaps no less famous than himself. 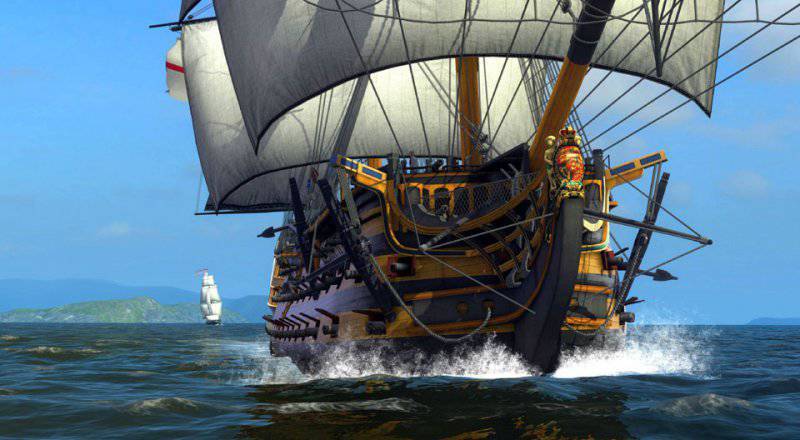 British 104-gun three-deck battleship "Victory". By the 1805, it was already a very old ship, it had sailed 40 for years, having survived many storms and battles. However, Admiral Nelson, not doubting the quality of the work of British shipbuilders, made him his flagship in the upcoming battle. I must say that the average service life of a wooden warship (and there were no others in those years) was only 10-13 years.
The construction of "Victory" took 5400 oaks and more 600 trees of other species, which is roughly equivalent to 50 hectares of forest. The total length of his rigging is over 40 kilometers, the total sail area is 6510 square meters. 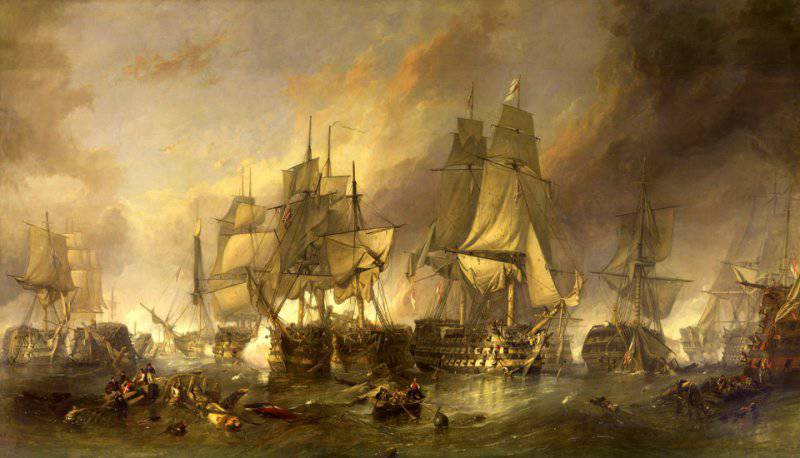 The Battle of Trafalgar in the painting by English artist William Clarkson-Stanfield, painted hot on the heels of 1806. It is clearly seen at how short distances this battle took place. The ships fired almost point-blank and sometimes literally collided with the sides. 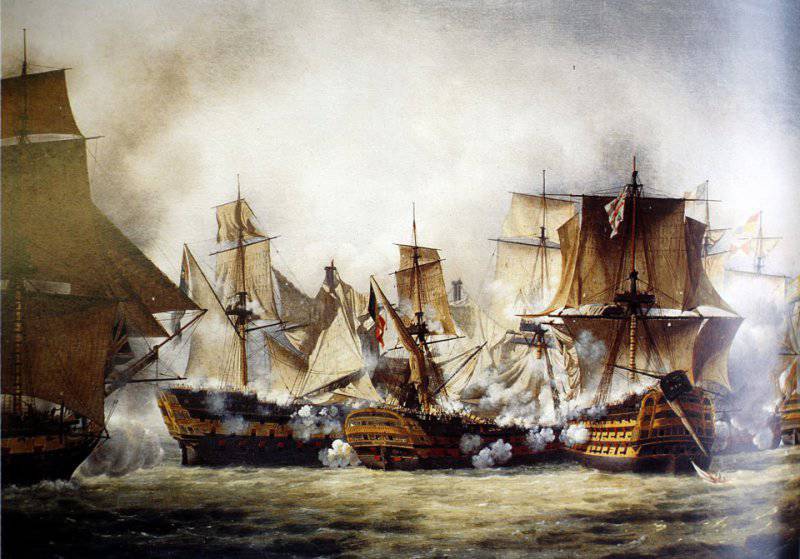 And this is a picture of the French artist Louis Philippe Crepin, with the same plot. It is clear that in the center he portrayed a French ship, fighting off the British battleships that were holding it from two sides. 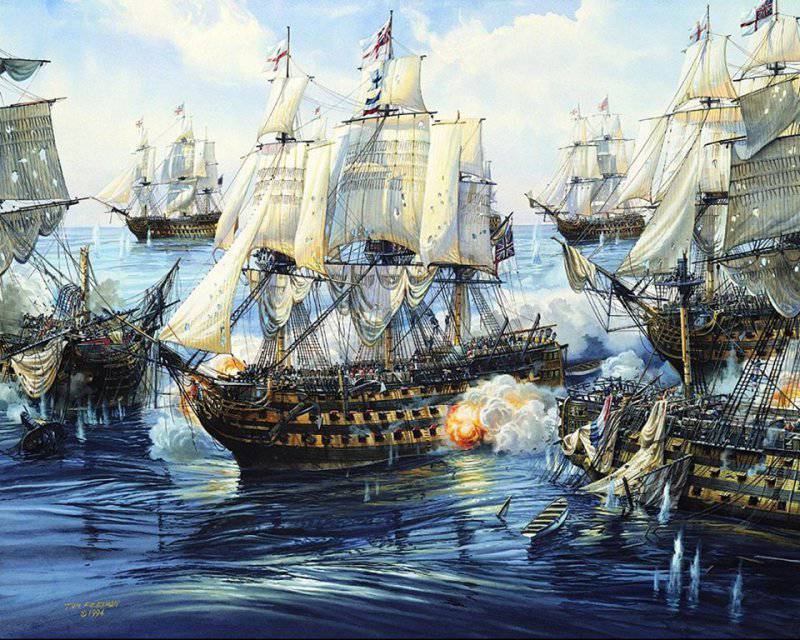 The culminating moment of the battle: "Victory", firing from both sides, breaks through the wake column of the French battleships and cuts the enemy system into pieces. 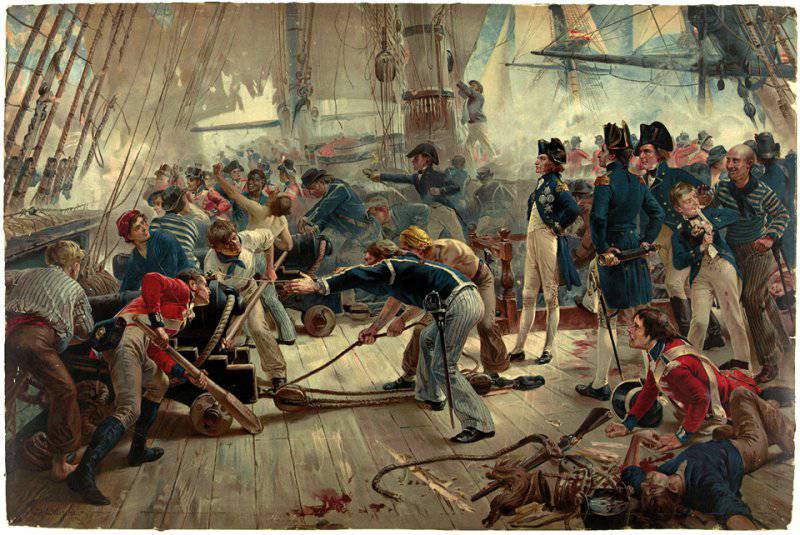 Lord Nelson with adjutants on the Victory deck during the Battle of Trafalgar. Painting by William Overanda. 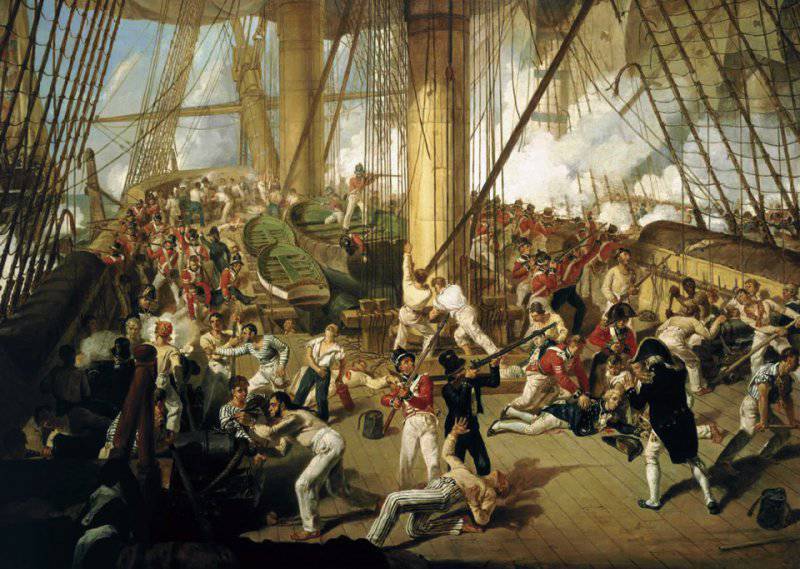 The heroic death of Nelson from the bullet of a French sniper is perhaps the most common subject of the 19th century English marine painters. I chose a picture of Denis Digton painted in 1825 year. 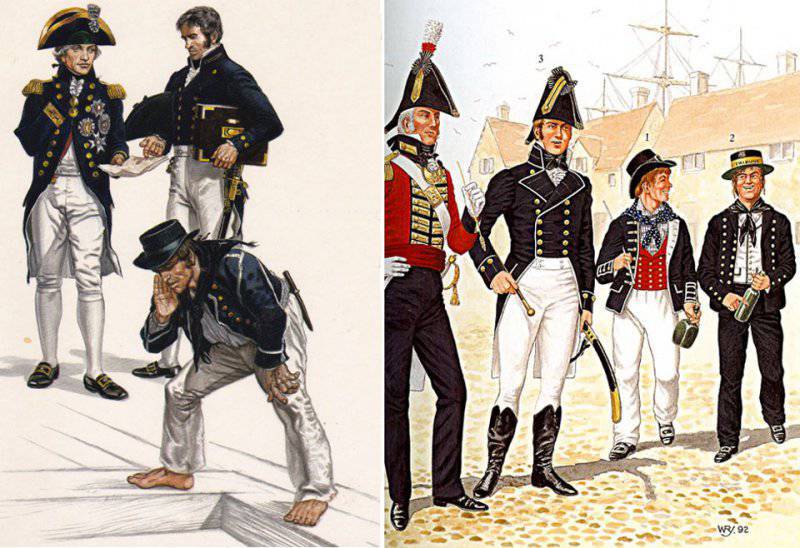 British sailors since Trafalgar. On the left in the foreground is the sailor, in the back is Sir Horatio Nelson himself and his adjutant.
Right, in order: a Marine officer, a fleet lieutenant, and two merry sailor hobbits returning from a pub. 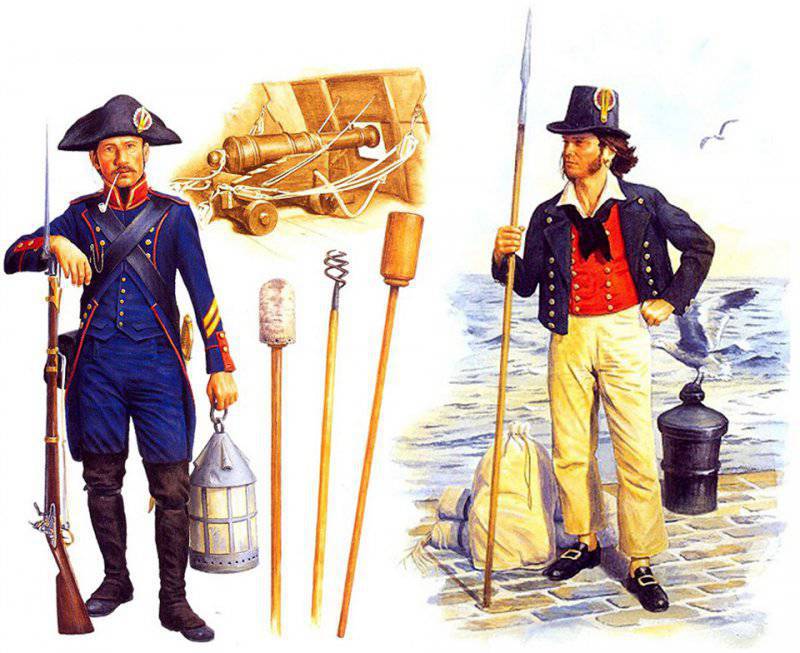 French sailors of the same period: a marine with a musket and a ship's lantern and a sailor with a boarding spear. In the center - tools for cleaning, loading and unloading guns. 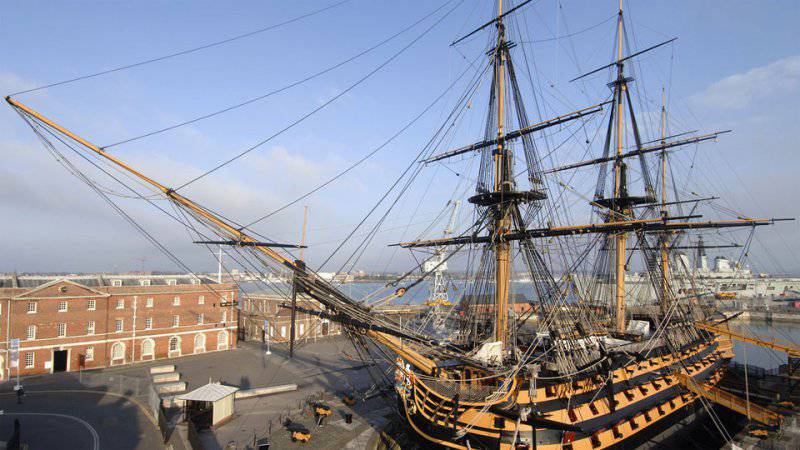 "Victory", turned into a ship-museum. 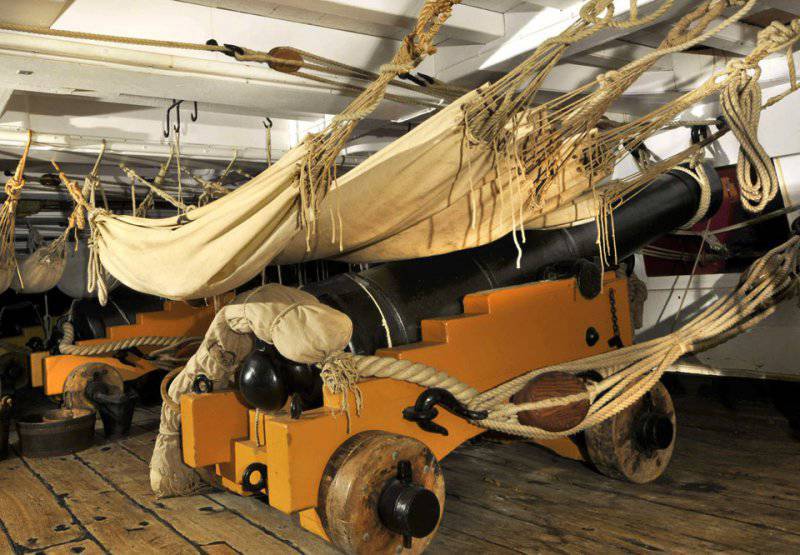 The gun deck "Victory", which was also a resting place for sailors who slept without much comfort in hanging canvas hammocks close to each other. However, the French sailors were even more "comfortable", because until the second half of the XIX century, they had to sleep in an embrace, two by two in one hammock. It is not surprising that among the sailors of other countries they had a strong reputation of homosexuals.

Battleship Victory in the cut. 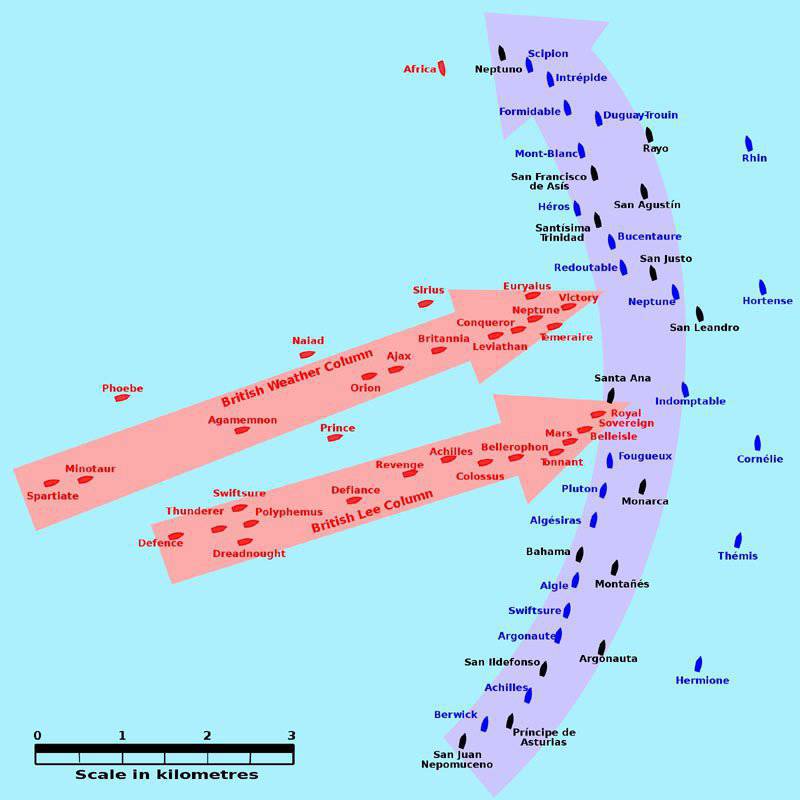