“23 of the Year for Nothing Has Been Done” 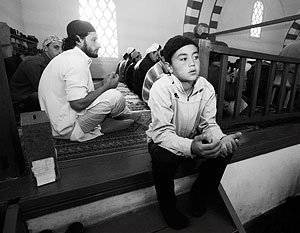 “We must become, having entered into the legal field of Russia, the structure that will bring to power all the problems and aspirations of the people,” said the Deputy Speaker of the Crimean Parliament Remzi Ilyasov to the VIEW newspaper. He announced the creation of the Tatar movement, which, unlike the Majlis, will be aimed at cooperation with the authorities.

In Crimea, announced the creation of an interregional social movement of the Crimean Tatar people "Kyrym" (Crimea). As reported by the agency "Crimean news", The movement will work within the framework of Russian legislation and in cooperation with the authorities to solve the problems of the Tatars. The conference of the new movement is scheduled for mid-December in Simferopol.

We also recall that last week at a meeting with members of the Human Rights Council, Vladimir Putin promised that the authorities would “be in constant dialogue with the Crimean Tatars, except those who are members of the Verkhovna Rada of Ukraine, are citizens of Ukraine. The Russian authorities cannot and should not have problems with the Crimean Tatars. ”
Vice-Speaker of the Crimea State Council Remzi Ilyasov told the VIEW newspaper to the relations with the leaders of the Majlis Mustafa Jamilyov and Refat Chubarov.

VIEW: Remzi Ilyasovich, your association has already managed to christen the "new Majlis." Do you expect a conflict with the "old" Majlis?

Remzi Ilyasov: We are not looking for this conflict. We made a decision for ourselves that the main thing in today's realities is to solve a complex of problems of our compatriots, the Crimean Tatars, and not to let ourselves be drawn into geopolitical clashes.

It is the decision of the kurultai that obliges us all to solve the problems of the Crimean Tatars. Just we carry out the decision of the kurultai, and not those individual members of the Mejlis who are ready to criticize us. Neither the Kurultai nor the Majlis is prohibited from entering any movement or party. From their side, we see the pursuit of their personal interests and ambitions. They took a definite position, which I do not consider constructive.

The decision of the kurultai (and this is the highest body of the Crimean Tatars) says that it is necessary to enter into power to solve the problems of the people. The second decision was to begin the political process of creating national-territorial autonomy in Crimea. And not a single word about loyalty to Ukraine was said.

In this regard, we have the ethical right to take such steps as are necessary to solve pressing problems, as well as the status of the people and this territory.

We immediately stated that we are not a substitute for the representative body, we believe that we need a constructive dialogue, which we have been trying to conduct since March, and we don’t disagree with the matter. We must become, having entered into the legal field of Russia, the structure that will bring to the power all the problems and aspirations of the people.

VIEW: Did you have personal differences with Dzhemilev or Chubarov against the background of creating a new structure?

R.I .: We have not talked with them for a long time and have not met - Mustafa-aga since the beginning of May, and with Chubarov - since June. I do not comment on their statements. So far, he has not seen any insulting attacks against himself either.

VIEW: The head of Crimea Sergey Aksenov and State Council Speaker Vladimir Konstantinov promised the Crimean Tatars more than 10 billion rubles in early September. for repatriates settling down to 2020 year. Do you trust these promises?

R.I .: We have already given the relevant instructions for the presentation. There, however, there are no specific concrete layouts, what exactly will we have in this regard - social, economic, and cultural.
We must show it and tell all the people together with the authorities. It will be some kind of guarantee that the authorities will not give up their words later.

And the second - not only bread is full of people. There are problems that are not related to the means - political and legal ones, which also need attention. This is the development of the language and schools with such teaching, the maintenance of our national traditions, which is also very important.

VIEW: What level of support do you expect?

R.I .: The Mejlis supports the 70 – 80 percentages of the entire nation. That is, such a percentage considers that the Majlis is a representative body of the Crimean Tatars. And I still formally considered a member of the Majlis. Our task is to justify such people's trust.

Patriotism has grown, and today people respect our position. But the actions of the Mejlis today cause many complaints to people. If you take any specific actions, then some of them are supported by just no more than 30 percent. But it is not necessary to consider percentages, but remember that this is your homeland, your people and your Crimea.

I live in Crimea and am not going to go anywhere, I have taken Russian citizenship and in another case I cannot assist in solving the urgent problems of my people. These are the realities. We have to be here, live on our land and do everything we can to ensure that life for both the Crimea and the Crimeans improves.

23 of the year for us, with a few exceptions, did nothing, and I'm not going to blame the people of Ukraine for this - I'm talking about the actions of the rulers, who dullly led the state. Therefore, they were in such a situation. As a result, today we see something from which it becomes scary.

And Russia is a peculiar country, it has its own rules, but we must accept the situation in reality. And we in the Crimea are one of the largest ethnic groups, which did not allow blood to be shed here.
VIEW: By what principles in general you will select people in your organization?

R.I .: The full name will be the Russian regional public movement of the Crimean Tatar people "Kyrym". It does not replace the representative body of the people, the kurultai Majlis, but is formed according to a different principle, according to the principle of delegation from the districts that we define. According to the quota principle, they nominate their representatives to the constituent congress of the movement. This Friday we will gather to approve them.

We will pay special attention to the Crimea, because almost 260 thousands of Crimean Tatars live here. There will be more 9 subjects in the organization, we will determine how many delegates they will present to the upcoming congress. These are Sevastopol, Krasnodar Territory, Bashkortostan, Tatarstan, Rostov-on-Don, Samara, Moscow, Moscow Region and St. Petersburg.