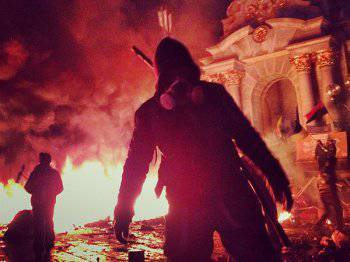 No, Ukraine itself will not calm down. Still a very long time. The economy is losing weight - creative rushing. Tanks not enough - more than enough soldiers. Common sense disappeared, but the cartridges remained.

1. Elections should be a bit ripped off. A week before the elections, Ukrainian politicians have already begun to announce in advance that Russia is going to break Peremog. I think this is said not just like that, but with subtle intent. In the polling stations where the results of the voting will not satisfy the organizers, the Russian invasion will be announced and these results will be annulled. Simple and effective.

2. Elections will be elimination method. Voting will be in the ballot box. Only not in polling. In the ordinary. And throwing ballots into the ballot boxes will not be candidates, but candidates themselves. So safer. And turnout is not necessary. And newsletters. As in fights without rules - who will remain on his feet at the time of closing ... no, not the polling stations, but the ballot boxes - he won. Early voting is already underway.

3. At the rally to come with a torch and a cocktail. Molotov. And this is not fascism. This is a dress code. Here in Russia, fascism. And in Ukraine, democracy. Human rights and all that. True, people are only those who wear a bandage of a strictly defined color. But this, as already mentioned, the dress code. High fashion and all things.

4. Soldiers want to demob. Commissar says early. Several hundred national guard servicemen held rallies in Kiev and Kharkov. Although what rallies? Rallies, as already mentioned, are held only with torches, at night and to the glory of Ukraine. And the soldiers simply gathered to ask when the demob would be. The commanders said it was early. The soldiers dispersed. Actually everything. And nothing happened.

5. Demobilization will still be. But it will affect only those who go to the service contract. So announced the president. And what is logical. How would demobilization, but no matter how. Tired of serving on call - sign a contract. Tired of the contract - tore it up and ... again at the call. This is called a choice. Democracy is the same. And to serve under the contract is good. Contract money promise. They are unlikely to pay, but they promise. And according to the contract, it is much easier for soldiers to be sent for slaughter - they are the contract soldiers, they themselves signed the contract, nobody forced them. Signed - everything, if you please. Saying to the boiler means to the boiler, saying to the meat grinder means to the meat grinder. A contract in a market economy is a sacred thing - die, but do it. Who does not like, they can serve as an urgent, the old-fashioned way. Democracy is the same. Free choice.

6. It goes to the next coup. This can be judged by the fact that the former Minister of Defense Geletey was appointed head of the State Guard of Ukraine, who became famous for the fabulous discharge of the Ukrainian army, first in the Southern boiler, and then near Ilovaisk. Why was he appointed afterwards as the head of the State Guard, I think not only everyone can guess, but many who can do it. The next boiler will make out. Right in the government quarter. Why? Simple and effective. All of them will pack, the unnecessary will be burned, and dictatorship will come. And there will be beauty in Ukrainian.

7. Training is already underway. The coup is meant. Nationalists gathered at the Rada to demand canonization of the OUN UPA. In the sense that the founding day was considered a public holiday and somehow else. Burn Rada has not yet become, but promised to return. Poroshenko promised that the day of the establishment of the OUN UPA will be the day of the defender of Ukraine instead of February 23. On that calmed down. For some time.

8. Prosecutor General promises to dismiss Kolomoisky. For triple citizenship. Envy, not otherwise. Kolomoisky put on the Prosecutor General with the device. What about him? He has his power in Dnipropetrovsk, his army, all his own. What does he care about the fact that in Kiev someone is jealous? The Prosecutor General should have been more cautious about joking with Beney, and Geletey became the head of the State Guard, therefore no one can vouch for the safety of high officials. Not a normal bookmaker will put a prosecutor general on such conditions. Only against. But who knows, maybe they just work for the public, while they themselves drink and eat in the evenings for the health of the sacrificial sheep.

9. The wall on the border with Russia is becoming more expensive. More expensive than built. But this is understandable. From the very beginning, the project was utopian, and it was not at all intended for defensive purposes. Salvage drank, people amuse, in the Russian garden to throw an extra stone, even if only a purely informational. Demonstrate what a big kyu they held for Russia and are determined to make it come true. Interestingly, at least the meter of this fence will have time to build before the third Maidan or some other revolution happens?

10. The new defense minister has become the former commander of the national guard Poltorak. Stupid Merciless. Hates everything Russian. The soldier considers cannon fodder. Body armor saves. He loves money. Ready to fulfill the most idiotic orders. In general, a rare bastard. The most it is to control the Ukrainian army. One can not find.

11. The Ministry of Internal Affairs of Ukraine reported an increase in crime by 40%. This is starting from the Maidan. It would seem that not so much - less than one and a half times. But this is without Donbass, because there the police account for a long time does not work. And without the Crimea, there is already statistics leading the Russian police. And without 2 May in Odessa, because it was not a crime, but an act of patriotism. And without the demolition of monuments to Lenin, because they also go to the statistics of patriotic actions. And in general, without all the events for which the police are afraid to leave. That is, only what the classic criminals committed, without flags and bandages, was taken into account. And if with flags and armbands - this is no longer going to the police statistics. And throwing officials into trash containers — this is also now considered not as hooliganism, but as lustration. Therefore, try to guess for yourself how real crime has grown, if you count all that is done with the flags of Ukraine and the emblems of various nationalist groups on the sleeves. I even can not imagine.

12. Brave Ukrainian military commissars gathered 200 thousands of reservists. But do not worry, this is a virtual army. No new hordes to the Donbass will not move. The reservists were simply rewritten and warned that when Russian tanks appeared on the streets, they should appear at the military registration and enlistment office for a rifle and a grenade, from which they should rush under the tank. And after some simple instructions, they let me go home. Guess how many reservists who have received such instructions will remain in their former place of residence to wait for the glorious moment when they will be given the last cartridge and grenade? I think less percent. Many have already gone to relatives in other regions, to Russia, anywhere, but just to not participate in the final act of mass suicide under the command of the new Minister of Defense. And if someone remained on hold, when it will be possible to play a hero, then the clinical idiot is hardly a great fighting force and will change the course of the war. The main thing that fewer normal people were near at the moment when the last heroes will run with grenades to rush under their own tanks and under each other. Stuffing get another one.

13. Public organization Patients of Ukraine considered mournful statistics. According to an organization in Ukraine, more than 1500 people die per day from a lack of essential medicines. In a day! Not a week, not a month - a day! It is clear that at all times someone from seriously ill patients dies from a shortage of drugs, but now in Ukraine this indicator probably jumped 5-10 times. Well, or in 3 times at least. That is, more than 1000 people die per day just because they were not provided with medicines. And this is definitely not an accident. This is a targeted savings. And the savings and the purchase of medicines and pensions and disability benefits. And this is done on purpose, the authorities do not even particularly hide their desire to get rid of dependents. At the televised debates, a representative of the Right Sector openly told the whole country that old people should give the young people the opportunity to build a new country. What he meant by this - guess yourself. Thousand per day is the scale for real builders of the new Ukraine. And we are here about 50 burned in Odessa, upset. That they 50 people at a time, if they are a thousand a day without hesitation, "cut." That they 300 killed in Donetsk during the truce. That they 3000 killed civilians in the six months of the war or 10 000 dead soldiers in different boilers. Thousand a day! Three hundred thousand a year! Just go! And this is not built concentration camps!

They themselves will not stop. Still very long. Common sense disappeared, but the cartridges remained.

Only who can stop them?

Russia and New Russia. No one else. But for the time being, Russia, on the contrary, is stopping New Russia itself in its liberation movement. And no one stops the brown plague that hit Ukraine.