October 23 2014
56
On the eve of the site Levada Center The results of a sociological study were published in which citizens of Russia and Ukraine found out about the conflict that is unfolding in the Donbas, as well as how Russians and Ukrainians see the future of the two states. It is emphasized that the survey was conducted twice: the first time was on August 22-25 (in Russia), and the second on September 26-29 (in Ukraine). The total number of adults polled by Russians was 1,6 thousand people, while interviewing residents of 46 Russian regions (data for the Russian Federation).

Before presenting the results of the survey, Levada Center reports that the sociological service of the KIIS (Kiev International Institute of Sociology) worked on a sociological basis, acting on the request of the Democratic Initiatives Foundation. 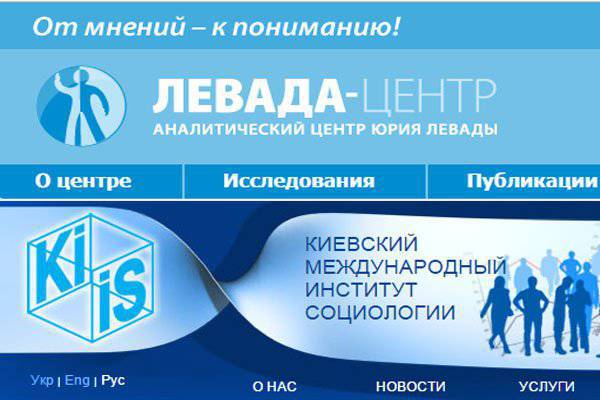 If the names of the funds and services include the terms “international” and “democratic”, then the results of such a study can be predicted in advance, since the polls are conducted in very specific audiences (or published with a “democratic” bias), although everything is displayed as “ independent case study. " However, forecasts are useless here - after all, you can immediately look at the results of Levada and the Ukrainian KIIS and draw your own conclusions.

Question # 1: Do you think that things are going in the country as a whole in the right direction today, or does it seem to you that the country is moving in the wrong direction?

The Ukrainian version is: Do you think the country's leadership is now doing things in the right or wrong direction?

Russians polled by the Levada Center answered this question like this:
65% were in favor of the fact that the country is on the right course, and almost 22% considered that the course of the Russian Federation is not correct.

The Ukrainian audience, interviewed by KIIS, spoke differently about the course of their country:
26% believe that Ukraine is moving in the right way, and 44% believe that this way is wrong. Moreover, if in Russia almost 14% of respondents could not unequivocally answer about the correctness and incorrectness of the path, in Ukraine about 29% of respondents could not characterize the course of the state. 1% of Ukrainians completely refused to answer the KIIS question.

In principle, 1% of Ukrainians who refused to answer can be understood, because today it is not at all clear who should be considered authorities on the “independent” square. Apparently, there are people in Ukraine who soberly assess the situation and understand that the real power in the country is not in Kiev, but in Washington, and whether the right course for this power is to judge not American but American citizens ...

Question two: Do you agree that Russia actively supports the pro-Russian forces in the east of Ukraine?

“Yes” and “rather yes” in Russia 50% of respondents answered (in the Russian Federation, the survey was conducted in August). “No” and “rather no” - 30%. Another 20% found it difficult to answer.

In Ukraine, 74% of respondents (the survey was conducted in September) believe that Russia supports the pro-Russian forces in the east "Square". So do not consider 15%. And 11% could not decide on the answer.

But the question itself sounds somewhat sly. It seems that the authors of the question are trying to deliberately reduce the scale of Russia and unify Russian citizens. Who exactly is “Levada” and KIIS here called Russia? If only the Russian authorities, even there, as we know, is not so simple (sorry for the questionable in connection with certain events turn). One wing quite openly speaks about the need to help Novorossiya, the other is inclined to wriggle and think about “international consequences”. And these two wings clap over each other, which results in the uncertainty that is observed in the Donbass. Moreover, the Russian authorities are far from the whole of Russia ... And somehow it is even silly to argue that all of Russia (from and to) has a unanimous opinion about the support or non-support of forces in Novorossia. A question with a certain "flavor" of provocation ...

When answering the third question, which sounds like "Do you agree with the statement that Russia rightly protects the interests of Russian-speaking citizens in the east of Ukraine?”, 66% of Ukrainians polled by KIIS said“ no ”. They gave an affirmative answer 20%.

Judging by the following question from Levada, 26% of Russians are confident that there is a war between Russia and Ukraine. Also consider 70% of Ukrainians. 59% of respondents in the Russian Federation and 19% in Ukraine are not considered to be a party to the conflict in Russia.

16% of Ukrainians said that there could be no talk of any peace in the Donbas until the Ukrainian authorities spread there. 28% noted that they are in favor of peace at any cost. The rest took intermediate positions - mutual compromises and concessions.

As they say, the owner (of the poll) is the master, but this part of the poll is also a bit like a provocation. Why, then, is this question not asked: do you think that the war in the Donbass was provoked by the West in order to slay Ukraine with Russia? Or this: what do you think, will Kiev stop the punitive operation in the Donbas before the new year?

But how can we expect such questions from “democratic” services? For these services it’s important not so much the opinion of the respondents as the presentation of the material itself. At the same time, provocative questions are cleverly disguised by screen issues that are designed to present the research as if it were independent.

One of these screens:

These sociological services were asked from their respondents about how do they see the future of Donbass. In Russia, 40% Donbass is considered an independent state. In Ukraine, only 7%. Part of Ukraine Donbass (on the same or new conditions) see 24% of Russians and 77% of Ukrainians. We are ready to consider the Donbass a part of Russia 21% and 5% of respondents (by country), respectively. The rest found it difficult to give a definite answer.

In general, what did this survey show? He showed that “friends” between Russia and Ukraine continue to drive a wedge, motivating him to have public opinion. Like, what kind of these Ukrainians-they think that Russia is at war with them. Yeah, right now! And vice versa: what are these, these Russians, believe that the Donbass should be independent. Yeah, right now!

For the fat point, the sociological services need to ask the respondents: Do you agree with the opinion that "Muscovites are like knives"?? ..