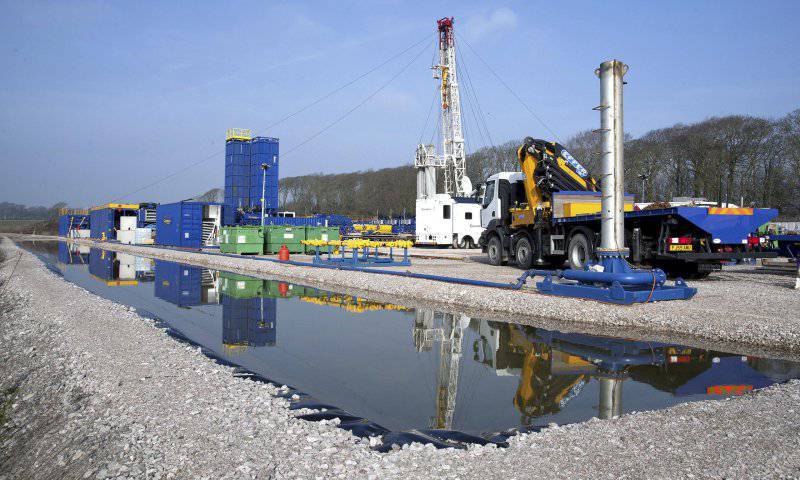 Prime Minister of Ukraine Arseniy Yatsenyuk recently declared during his visit to Lviv region that Kiev is ready to sign a “temporary agreement” with Moscow on gas supplies to the “Square” territory. When journalists asked the head of the Ukrainian government about at what price Ukraine would buy gas from Gazprom, Yatsenyuk hesitated for a while, and then announced that it was not Gazprom that determined the final price, but it turned out that Stockholm arbitration. They say, as Stockholm will say - this price will be. For some reason, such statements in the west of Ukraine were enthusiastically received, as if Stockholm were indeed the decisive side of the matter, and it seemed that Stockholm was able to put pressure on Gazprom, defining only the low price for “blue” fuel for Ukrainian consumers.

As is known, the Russian requirements are as follows: repayment of accumulated debts and prepayment, based on the price of $ 385 per 1000 cubic meters.

Poroshenko, who returned from Milan, said that "Ukraine will buy gas from Ukraine on Ukrainian terms": $ 385 per thousand cubic meters - in winter. They say, since the contract is “temporary” - winter, then we can say that Russia accepted the conditions of Ukraine ... Well, Kiev officials are able to throw dust in the eyes, nothing can be said here ... They try to turn any situations in Kiev into their personal success. I remember, even during the Ilovaysky meat grinder, Kiev said that this was another success of the Ukrainian army, which “had moved to previously prepared positions”. How many of these “prepared positions” then had to be dug out - Kiev is still silent. He says: 110 people died - no more, well, there are still missing people. The fact that these "missing" is ten times more than the officially recognized dead, ukropraviteli also prefer to remain silent ...

In the meantime, Yatsenyuk and Poroshenko talk about how they managed to "bend" Russia in terms of gas prices, you should pay attention to the "truce" card. And this one should pay attention to the card, considering the fact for the sake of which, in fact, the entire punitive operation in the Donbas was started by the Kiev rulers. These are areas that Western companies estimate as the main territories, in the depths of which shale gas is located. The plots correspond to the so-called Yuzovsky deposit of Donbass. On the map, they are highlighted in light green and circled in blue dotted lines. 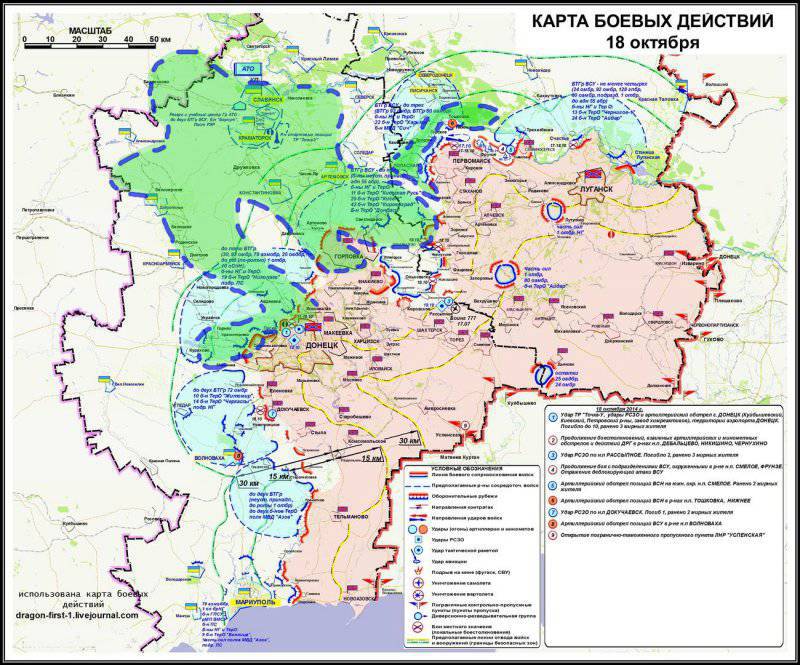 If you look at these sites, it is clear that their main part is under the control of Ukrainian security officials. There are only small areas of shale deposits, which are controlled by the army of Novorossia, but by their total area it is no more than 5% of the area of ​​deposits. But all the talk about the "truce" on the basis of the so-called Minsk agreements began precisely when Kiev gained control over more than 9 / 10 areas of the Donbass field, which is going to develop, for example, Shell. After that, they started talking about “special status” and other “preferences” for Donbass. They even remembered the “world” ...

This approach actually proves that Kiev fought (is fighting) not so much, actually, for the Donbass, but for allowing its Western henchmen to get access to the southeastern slate. It turns out that Kiev is not particularly interested in the rest of the Donbass territory ... But if it doesn’t, then why do Ukrainian national guardsmen and other kamarilla continue to beat from Gradov, howitzers and mortars in the same Donetsk.

To answer this question, you need to look at the map again. The site of the field comes close to Donetsk from the north. If you believe the reports ShellThis is one of those parts of the field where shale gas reserves are quite substantial. It turns out that fighting for Donetsk airport

Kiev needs are not even to control the air port as such (although this is also important for the Ukrainian authorities), but to completely delineate the shale field and take control of its borders. There is also a plot in the area of ​​Gorlovka and in the western part of the Luhansk region. And for these sites intensive battles can resume at any time. The fighting also shows that the Ukrainian “siloviki” have a task to advance deeper than the existing positions so that the DNR and the LPR do not have approaches to the shale field and “do not threaten” its development by Western friends of Kiev.

Now about the proposal of the Ukrainian "commanders" that they, they say, are ready to go on a certain exchange of territories. Initially, it was said that Kiev was ready to give the DPR areas near the settlements of Avdiivka and Peski in exchange for other settlements. However, this initiative in Kiev itself was quickly hushed up. Is it not because the shale field passes through Peski and Avdeevka? Apparently, the “commanders” were told that it was not worthwhile to change Avdiivka and Peski into areas where “dumb gas” was not ...

Apparently, Ukraine is going to conduct an administrative-territorial reform and to allocate the Shale Region as a part of the country with administrative centers in the cities of the Great Peremoga, Shell'sk and Gazo-Slantsevsk. 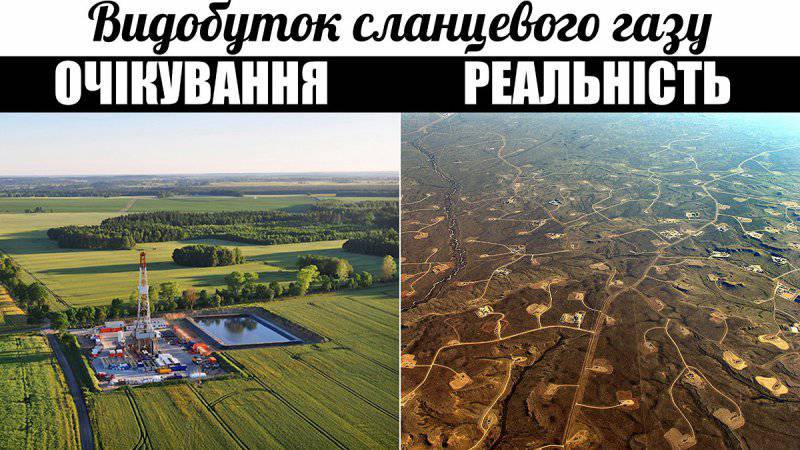