From Iveco to Bobcats 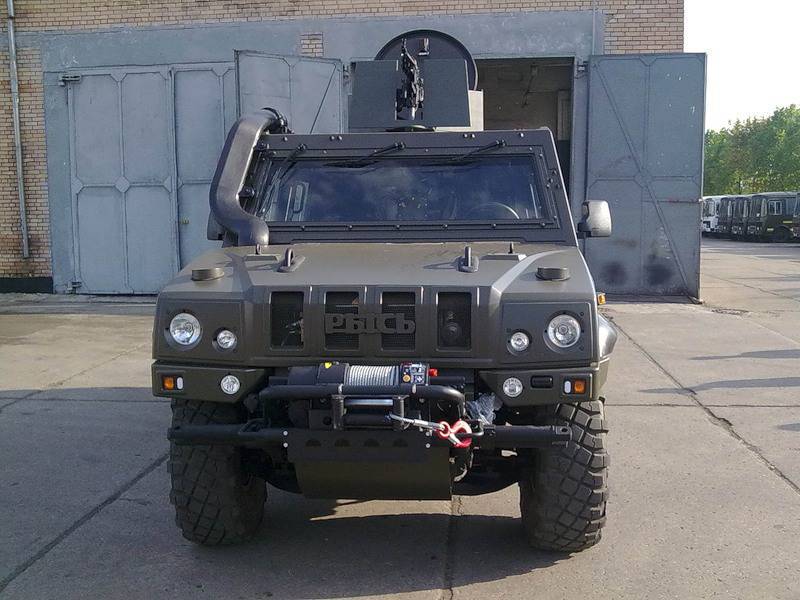 Car protected "Lynx" (IVECO 65E19WM).
The car is intended for use as a means of providing rolling stock and performing tasks of service and combat activities of different types of troops and law enforcement agencies, as well as the transport base of the carrier of light weapons systems, communications and military equipment. 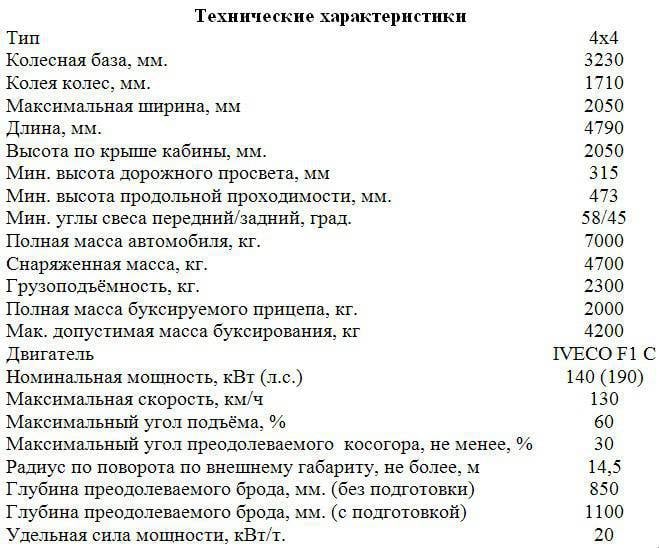 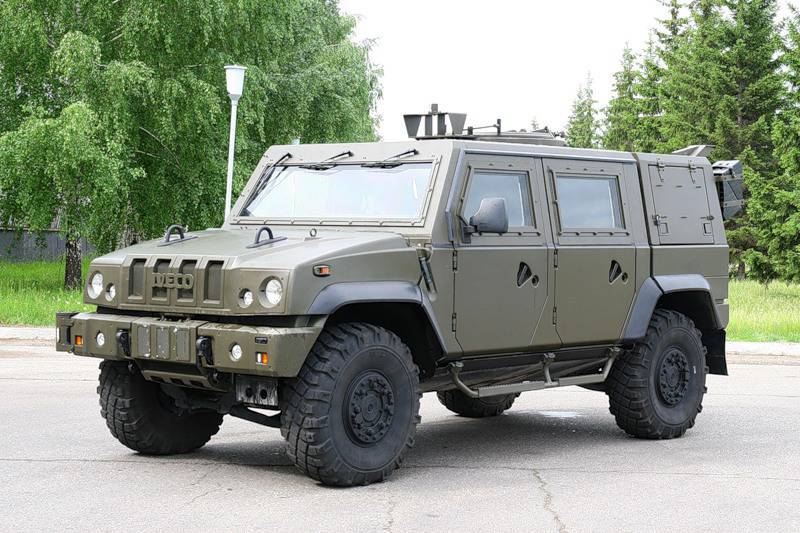 In the process of testing, a set of laboratory, laboratory and road works and road tests were carried out in accordance with the program approved in the established manner.
The tests were carried out on the basis of the scientific and technical center of KAMAZ OJSC and the Federal State Institution 21 NIII MO RF of Bronnitsy. At the request of the Ministry of Defense of the Russian Federation, the IVECO 65E19WM (LMV) car was named “Lynx”.
The sensational video, where IVECO on the virgin snow lags behind Russian armored cars, is simply explained. Initially, cars that were not adapted for use in the Russian Federation were purchased with a wide front bumper, which did not include snow protection and chains on wheels, which are available on similar vehicles of the armies of Norway and Austria. A wide bumper when driving in deep snow created the effect of a heel, pushing a snowdrift ahead of IVECO, which led to a significant slowdown. The car was not stuck, but it was going hard, jerking.
Today, for snowy areas, incl. and for Russia, the cars are equipped with a special protection of the engine tray, which simultaneously performs the functions of a snow divider, the design of the bumper has been changed.

According to the results of the tests, conclusions were made with the issuance of recommendations for additional special tests to determine the protective properties when exposed to the damaging factors of modern weapons.
Also, at the request of the Defense Ministry of the Russian Federation, the Italian side made the following improvements:
- 1 alternator on 240A at ​​28В instead of 2 alternators on 110 A at 28В is applied;
- installed 24-volt electrical equipment with DC / DC (DC) converters on 12 V;
- battery protection against stones;
- an additional combined heater was installed for engine heating in the cold season with a rated thermal power ≥8kW, also applicable for cabin heating;
- to improve the climatic conditions in the cabin, added an additional diesel heater with a rated thermal power of ≥2kW, intended for heating the cabin and installed in the rear part of the body;
- on the hood there are two additional brackets for the antenna;
- a shortened bumper with fog lamps in the upper part and a triangular towing device as a front bumper;
- set protection from snow in the front bottom;
- applied towing device in the rear with an increased towing angle;
- an additional socket for connecting electrical equipment when towing a car;
- Increased the width of the footpegs to 180mm;
- increased the maximum load on the annular support in the hatch (on the roof) to 200 kg;
- Increased the maximum load on the roof to 300kg .;
- Changed the design of the seats in the part of the replacement of the covering material;
- installed a power distribution unit in the cab with branching connectors (12 / 24 B) for connecting consumers;
- installed ceiling lamps for lighting the stairs and the lamp lighting the commander to work in the blackout mode;
- a bracket for a multi-element antenna (in the form of a spoiler) is installed in the rear part of the cargo compartment;
- The vehicle includes elements (air intake and exhaust pipe element) to overcome the ford;
- exterior coloring of the car is green according to RAL 6014;
Additionally included in the car following parts:
- carbon dioxide fire extinguisher
- triangular towing device
- electric winch
- spare wheel
- anti-skid chains
- a set of tools and pullers
- manual
- service book
- maintenance and repair manual.

Russian IVECO testers note a very convenient automatic tire pressure regulating device, which can be changed by simply pressing buttons according to road conditions, without leaving the cab. The car seats are very comfortable for the crew, for example, they have special notches for body armor, which take on the weight of the armor and unload the shoulders of soldiers. Head protection against shaking while driving and the impact of a shock impulse during undermining is reliably provided by a special head restraint. The installed seats are equipped with five-point safety belts with a quick release lock. In addition, the design of the seats suspended from the inner frame, as well as special pallets under the feet of the crew, significantly reduce the effect of dynamic loads during blasting on a mine. 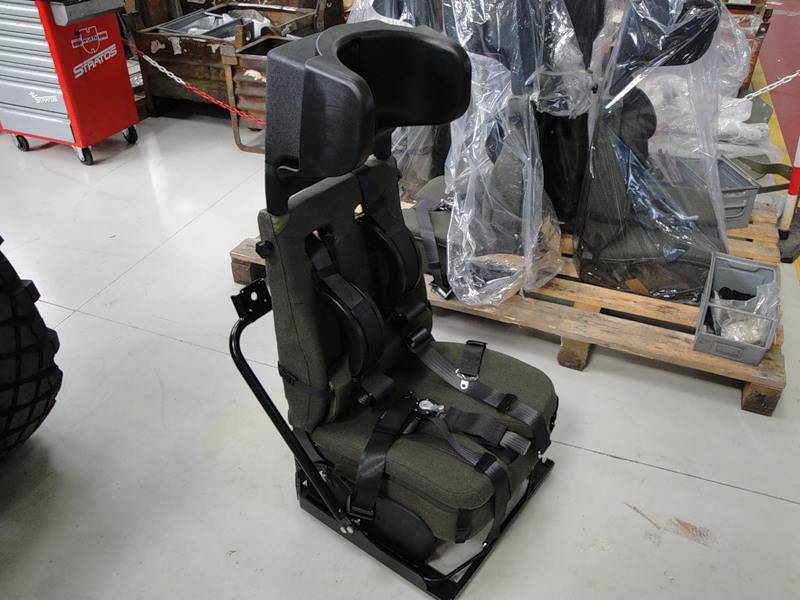 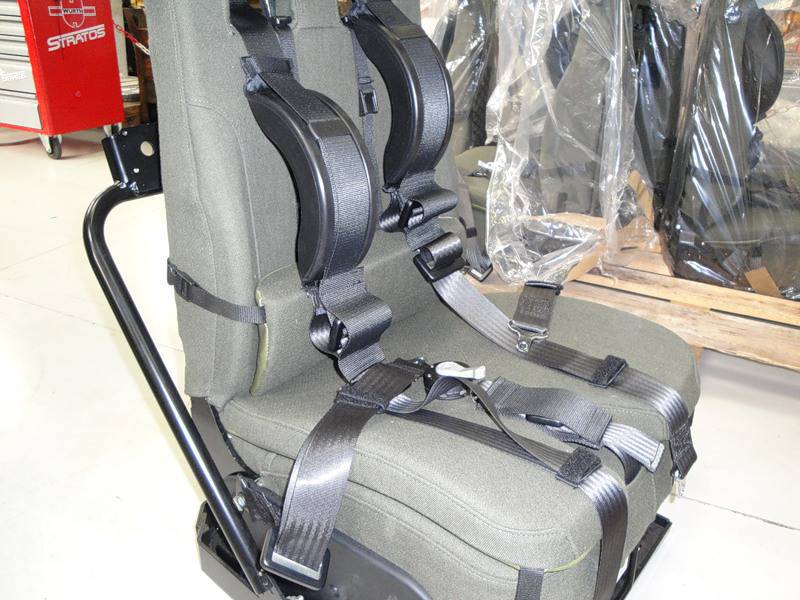 The company IVECO regularly confirms the high class of protection of your car. Over the 10 years of operation, 28 demonstration explosions at landfills were carried out and around 10 vehicles were blown up by the enemy in combat. The only time that people died was 26 June 2011 of the year, when the Spanish Army's armored car was blown up by militants in Afghanistan. Despite the fact that the power of the side explosion was measured 120 kg in TNT equivalent (which is tens of times higher than the stated resistance under blasting), only two people from the crew died, and three more were injured, but survived.
The car is specially designed so that when undermined the car under no circumstances turned over and overturned, which is achieved by a special form of the bottom.
In IVECO wheels there are special anti-mine inserts and a substance that pulls holes, which allows the vehicle to maintain mobility during detonation on light anti-personnel mines and shelling from small arms.

In the period from 07 to 12 in March 2011, together with experts from the Russian Ministry of Defense and OJSC KAMAZ, special tests were carried out to determine the protective properties when exposed to damaging factors at sites in Germany in Ulm (ballistic tests) and Schrobenhausen (explosive tests) modern weapons.
The head of the Main Automobile and Armored Directorate of the Ministry of Defense of Russia, the General Director of KAMAZ OJSC, the chief designer of KAMAZ OJSC and other representatives of the defense department and the military industry attended the tests.
For two days, Russian specialists conducted specialized IVECO shelling of B-32 armor-piercing incendiary bullets using a 7,62x54 ballistic barrel. It is from such ammunition manufacturer guaranteed full protection for the third level STANAG 4569 (it corresponds to the Russian 6 class of ballistic protection according to GOST R 50963-96). The shelling was carried out from different distances to various places of the car: the joints of armored plates, the edges of the glass, in order to find vulnerabilities. On the first day, 150 shots were fired, on the second, on the order of 60. No breakthrough was achieved.
Then, two IVECO car explosions were carried out: under the front left wheel and under the bottom.
The first day 6.4 kg of TNT was used as an explosive device. The process of detonation was filmed from different angles by several video cameras, which were installed, including inside the car. On the driver's seat there was a special mannequin completely imitating the human body.
I was shown several videos, one of which was allowed to put on the Internet.


The explosion destroys the front suspension, severely damages the engine, but the armored capsule is intact. The hatch is intentionally designed to swing open during an explosion and thereby protect the crew from excessive pressure. Inside the car, damage is limited to an offset steering column (there was no contact with the driver) and plastic chips from the front panel.
Inspection showed that the dummy driver, who was closest to the explosion point, was not injured, only a flying piece of a panel slightly torn his pants and cut his leg below the knee. The sensors record that there was no excess of the overload limit for the human body. 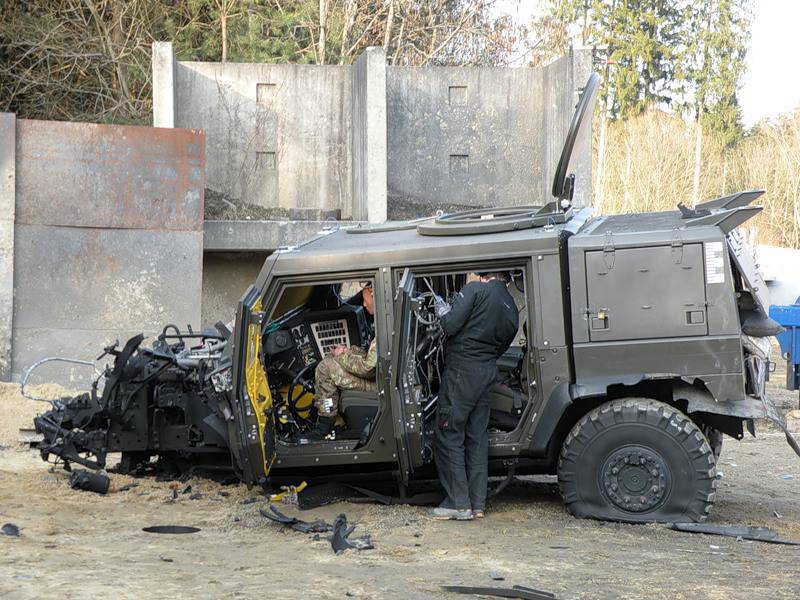 On the second day, two shell explosives were exploded under the passenger seat to the right of the driver’s seat and under the rear right seat. The explosion destroyed a V-shaped steel mine-mine defense suspended on the silent blocks, but the bottom of the armored capsule was only slightly swollen. Breakthrough did not happen.

How did the Italian manufacturer achieve this result? Protection technology involves the creation of a separate armored capsule for the habitable compartment, which is equipped with a ceramic ballistic protection attached to the metal frame, standard armored panels and armored glass. The ribs are a special tubular frame. 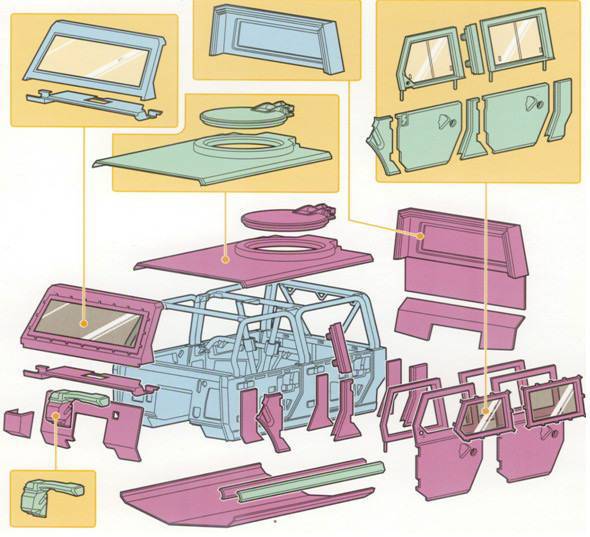 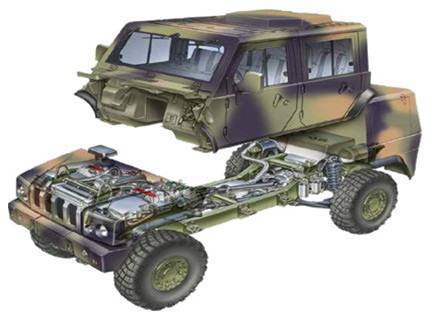 The explosion energy is gradually extinguished by ceramic protection, a two-layer bottom, frame struts, a roof, and a suspension system. The seats of the crew members of the vehicle through the suspension system receive a significantly weakened impulse of acceleration, which does not exceed the medical overload rate for a person. 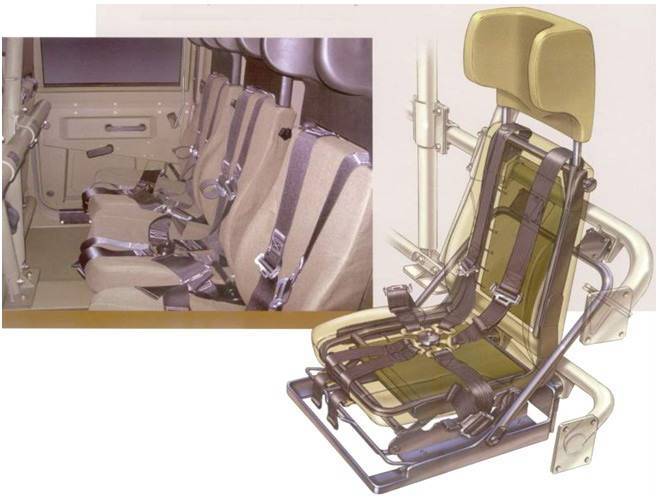 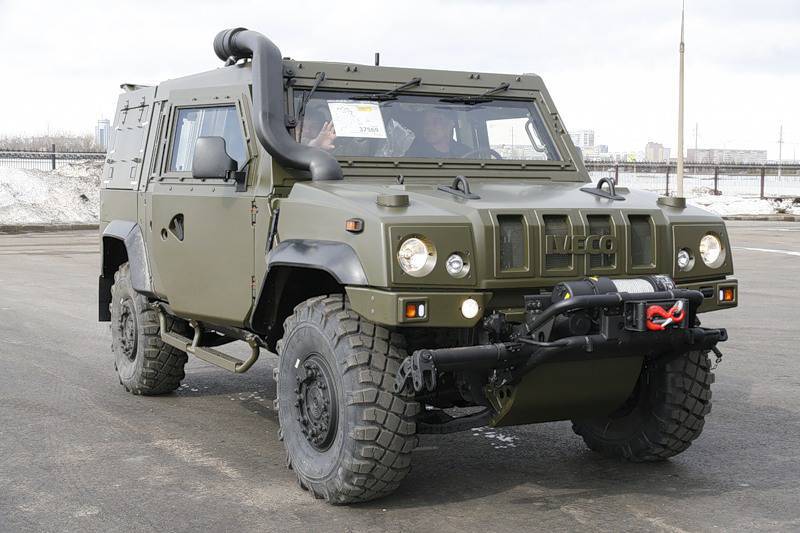 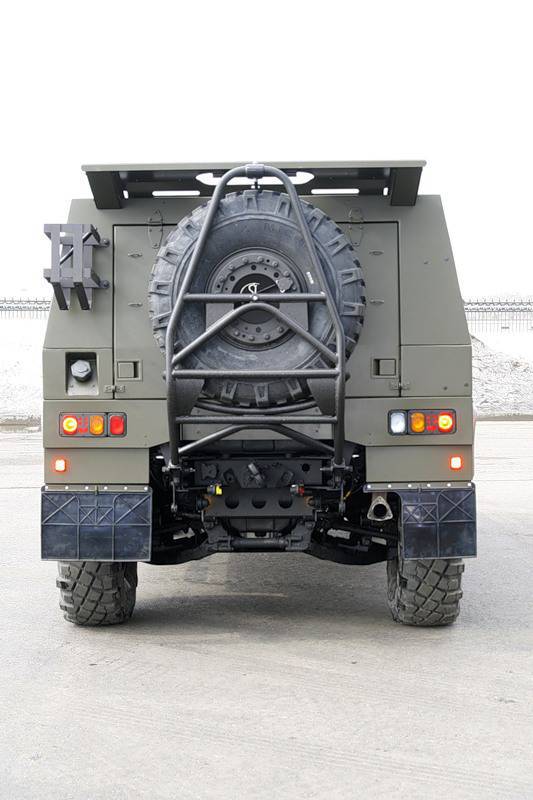 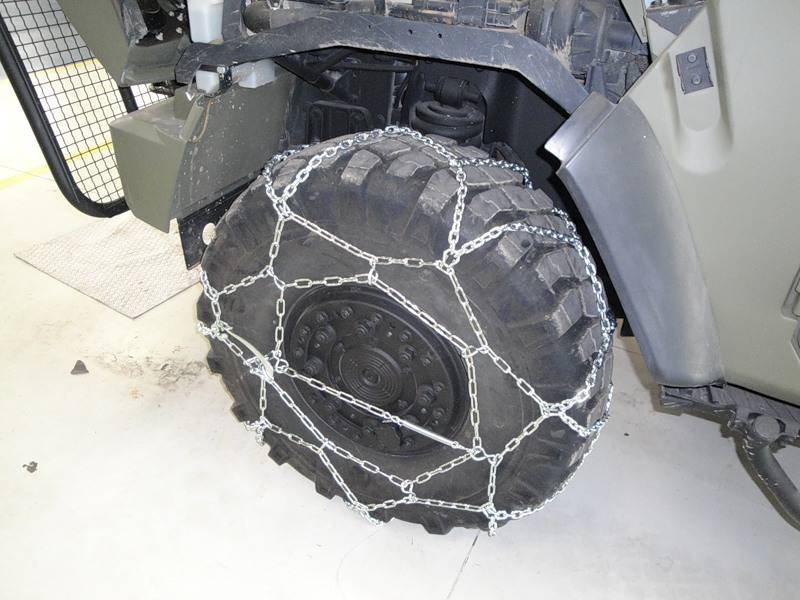 - six cars without a winch, without anti-slip chains and with technological installation of a spare wheel 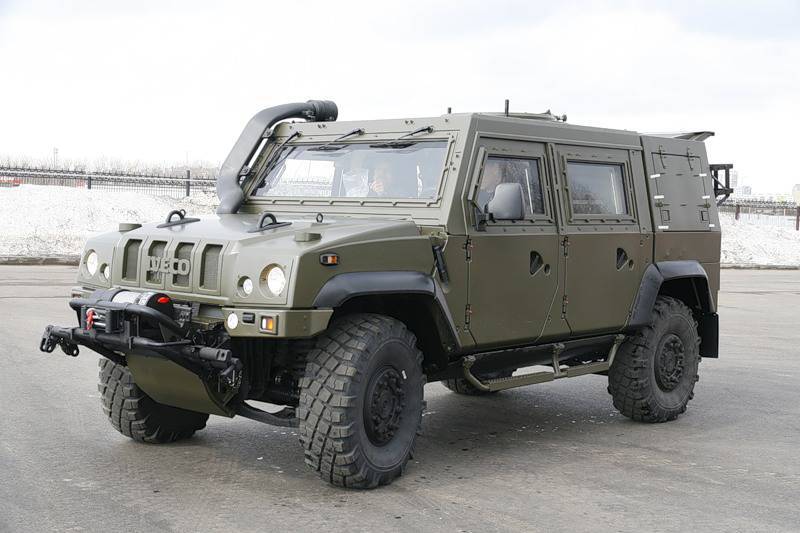 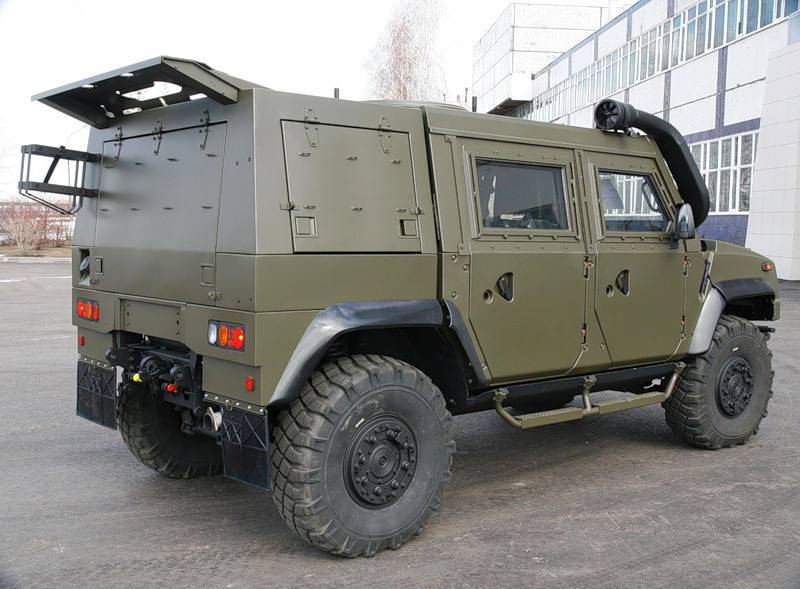 At present, the “Lynx” car batch (IVECO 65E19WM (LMV)) is undergoing operational (military) tests in the units of the Russian Ground Forces.
At the request of the GABTU MO of the Russian Federation, KAMAZ OJSC has developed a folding arrow protection design in the form of a rotatable rotating turret, which is installed on the roof and can be supplied both with Lynx vehicles and other products. 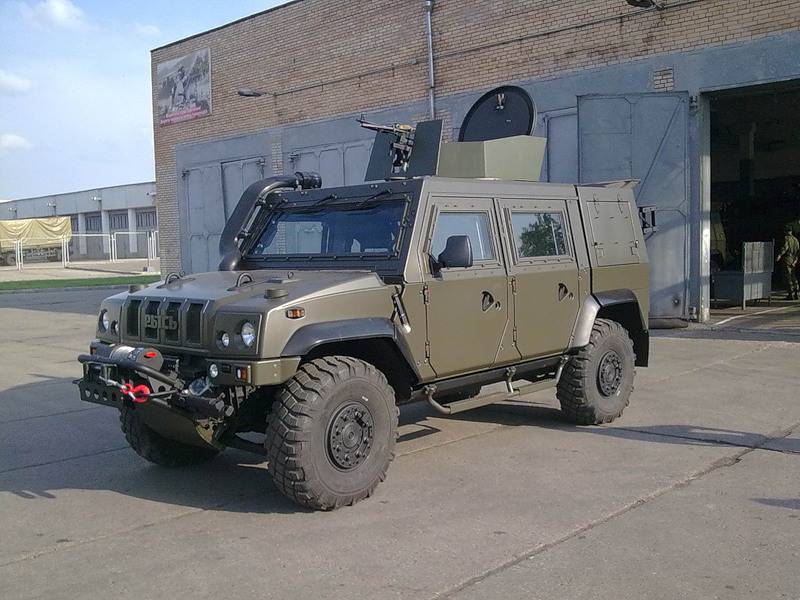 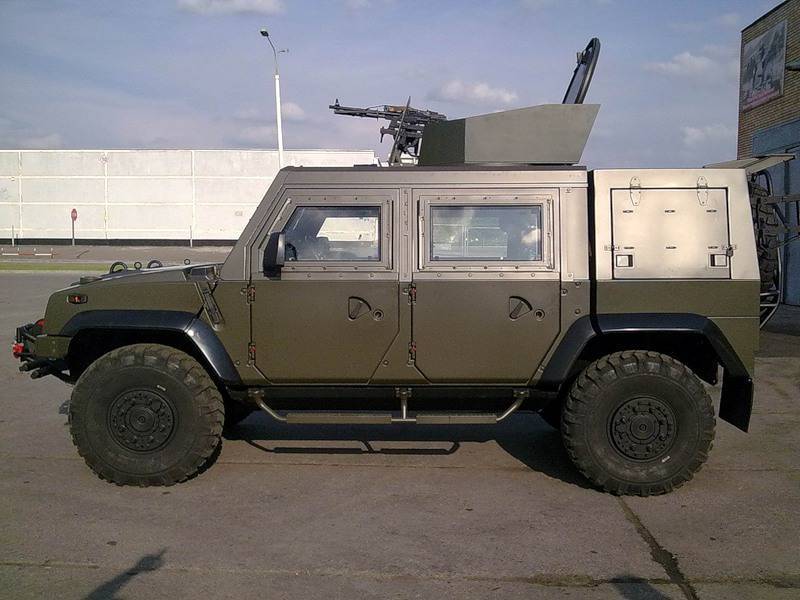 In addition to the five-seater version of the car there is a six-seater. In the standard motorized rifle department there are seven people (commander, gunner, artillery gunner, gunner, gunner, rocket launcher, gunner-assistant gunner, driver), but given that the Lynx does not need gunner artillery gunner (his functions will be performed by the machine gunner), the staff offices on this armored car will fully correspond to the number of seats in the car. 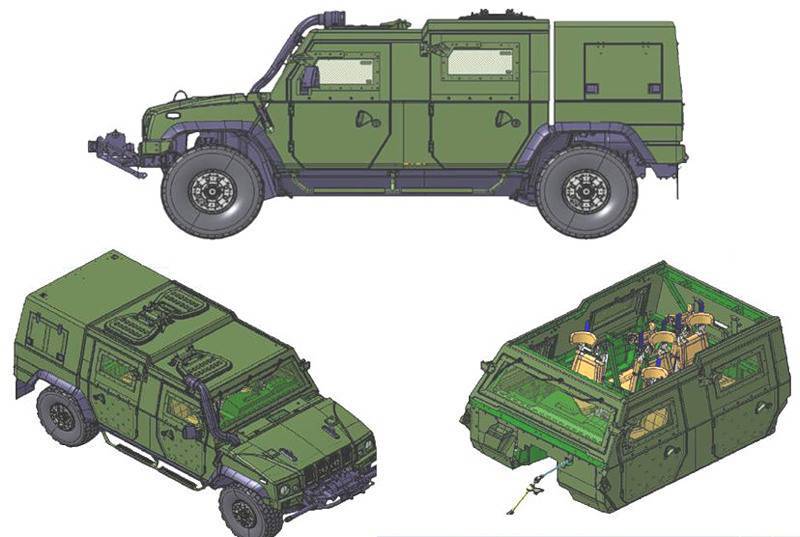 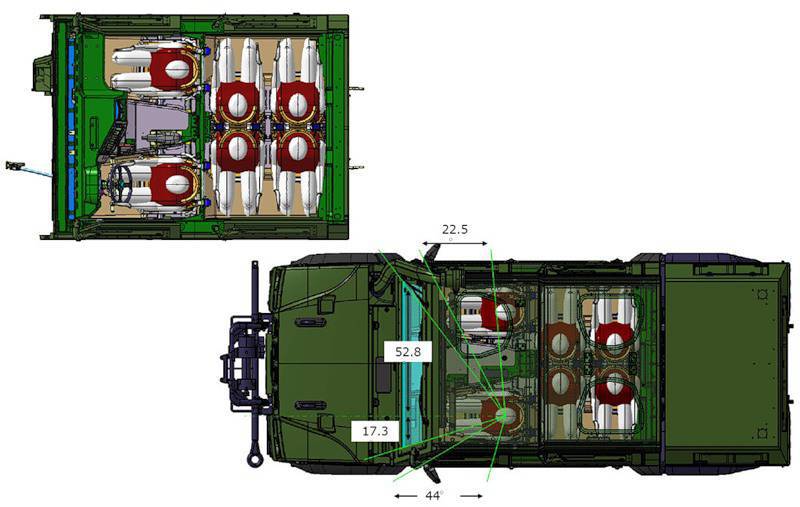 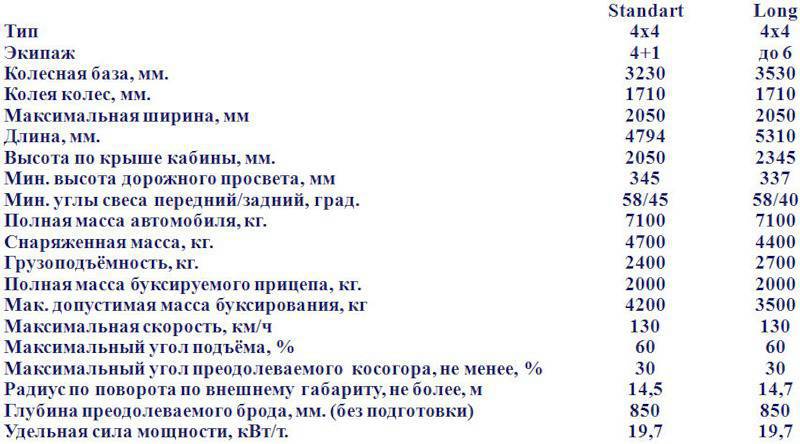 Further continuation of cooperation between the Russian Ministry of Defense and IVECO will depend on the results of military tests and on the feedback from the units operating the vehicles.
In the future, at the stage of government negotiations, the issue of the production of “Lynx” vehicles on the territory of the Russian Federation with partial localization of the production of components is being considered. KAMAZ OJSC will assist the structure that will produce the Lynx car in Russia, but the enterprise itself is not interested in the production of this car. The final decision on the assembly company will be made by the State Corporation "Russian Technologies".

We are in Yandex Zen
"Lynx". Details of operation
"Tiger" vs "Iveco" - personal observations
40 comments
Information
Dear reader, to leave comments on the publication, you must to register.