French nobleman in the Russian service

October 22 2014
10
В stories Russia received a lot of foreigners for the sovereign's service, which brought great benefit to our country. Everyone knows the names of Franz Yakovlevich Lefort, Burchard-Christopher Minich, Mikhail Bogdanovich Barclay de Tolly and many other Russian devotee sons of different nations who became Russians. But among them there is a name that occupies a special place.


The representative of the ancient French kind Alexander Fedorovich Langeron was born 13 (24) in January 1763 in Paris. At birth, he was named Alexander Louis Andre. 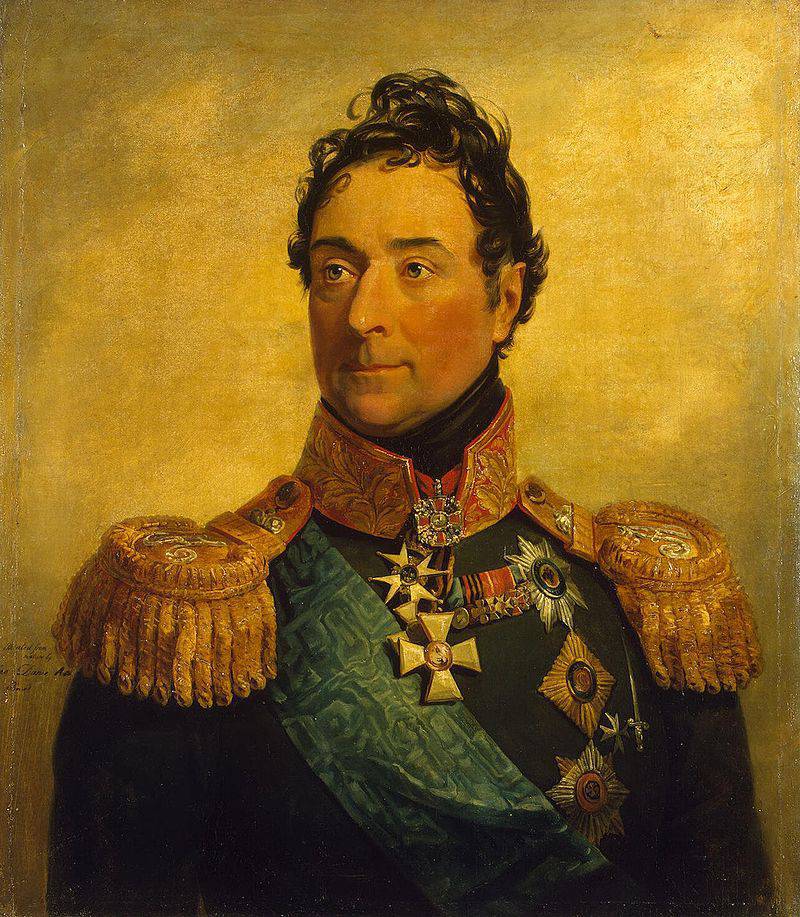 In 17 years, Langeron has already begun military service. In 1782, he traveled to America, where, under the command of General Viomenilles, he fought with the British.

After the conclusion of the Treaty of Versailles (1783), Langeron returned to France. In the same year, with the rank of lieutenant colonel, he tried to volunteer in the Austrian army, acting against the Ottoman Empire. Having received a refusal from the Austrian emperor Joseph II, he went to Russia, where on May 7 (18), 1790 he was enrolled as a colonel in the Siberian Grenadier Regiment and took an active part in naval operations of the next Russian-Swedish war (1788-1790). Commanding part of Russian rowing fleetLangeron June 22 (July 3), 1790 distinguished himself in the battle of Vyborg, for which the Empress Catherine II personally handed him the Order of St. George 4th degree.

In the autumn of the same year, he was already on the Danube, in the army of Major-General de Ribas, besieging the fortress of Ishmael. 11 (22) December 1790 of the year during the assault of Ishmael, under the command of Count Suvorov-Rymniki Langeron, headed the battalion of the Livonia regiment of javelin, was in the column of General Arsenyev from the side of the Danube, where he was seriously wounded in the leg.

The following year, Langeron participated in the battle of Machin and was awarded a gold sword with the inscription "For courage."

From July 1791 of the year to 1794 of the year inclusive of Langeron, seconded to the troops of the 1 coalition, had to fight against the troops of revolutionary France, consisting of the troops of the French émigrés and the Prussian army of the Duke of Brunswick. Langeron took part in the battles against the French Republicans near Maubeuge, Charleroi and Maastricht. 1793-1794 campaign was especially active for Langeron when he was in the Netherlands in the ranks of the Austrian army of Prince of Saxe-Coburg, delivering information about the actions of the Austrians to St. Petersburg on behalf of Empress Catherine II.

Subsequently, Langeron's career began to develop rapidly. July 30 (August 10) 1795 of the year Langeron was transferred to the Little Russian Grenadier Regiment and was soon appointed as its commander. 28 June (9 July) 1796 of the year Langeron was promoted to brigadier, and 22 of May (2 June) 1797 was promoted to major general and was appointed chief of the newly formed Ufa Musketeer Regiment.

In the reign of Emperor Paul I (1796-1801), which Langeron enjoyed unchanged, he was accepted into Russian citizenship, granted by the Count of the Russian Empire, promoted to lieutenant general and appointed chief of the Ryazhsk Musketeer Regiment and infantry inspector of the Brest Inspectorate. The highest reward for himself Lanzheron considered personal correspondence with the emperor, even on official business.

20 November (2 December) 1805, commanding a column in General Buxhevden’s corps, Langeron participated in the battle of Austerlitz, the disastrous outcome of which for some regiments of his column caused so much displeasure from Emperor Alexander I that he was asked to resign. Soon, however, this decision was relaxed, and he was left in the army. When the war began with Turkey (1806-1812), Langeron was in a separate 13-division of his friend Duke Richelieu.

In the 1807 campaign of the year, Langeron commanded a separate detachment in the corps stationed under Ishmael, and on April 7 (19) participated in a battle with the Turks who had left the fortress, having beaten off two flags and two guns from them.

A year later, in view of the menacing advance of the Grand Vizier to Bucharest, Commander-in-Chief Prince Bagration ordered Langeron to take measures to defend this important warehouse for the army. Being ill, Langeron nevertheless with 6 thousands of bayonets boldly moved against 20 thousands of Turks and August 29 (September 10) XFUMX of the year under Thrasina defeated the vanguard of Boshnyak-Agi. The Vizier began to strengthen his camp, but, suppressed by the active actions of Langeron, began to withdraw the troops back over the Danube, refusing to move to Bucharest. For this Langeron was awarded the Order of St. Vladimir 1809-oh degree.

In 1810, Field Marshal Kamensky ordered Langeron to command the siege of Silistra, which seven days after the trench was prepared, 30 of May (11) of 1810, surrendered, for which Langeron was granted the Order of St. Alexander Nevsky. During the siege that followed, Shumla Langeron 8 (20) in July under Derekie defeated Ahmet Bey’s 12 corps, for which he was awarded the Order of St. George 3 degree.

7 (19) in August 1810, Lanzheron was appointed commander of the 22 Infantry Division and in the new 15 (27) of September, forced to surrender the garrison of Rushchuk fortress.

At the beginning of 1811, due to Kamensky's illness, Langeron was given command of the Moldavian army until the arrival of Field Marshal Kutuzov. In the battle of Ruschuk on 22 June (July 4), Langeron commanded the left wing and for the difference was promoted to generals from infantry.

When surrounded in October - November 1811, the army of the Grand Vizier on the Danube near Slobodzei, which decided the outcome of the war, Langeron was Kutuzov's initiative assistant, commanding all troops on the left bank of the river, for which he was awarded the Order of St. Vladimir 1 degree. At the beginning of 1812, Langeron already commanded the 1 Corps of the Danube Army.

In the Patriotic War, Lanzheron commanded one of the corps in the Moldavian Army, Admiral Chichagov, and participated in the battles of Brest-Litovsk and Borisov.

With the start of the Foreign Campaign 1813, Lanzheron was entrusted with the siege of Thorn fortress: after the 7-day siege of 4 (16), the fortress surrendered in April, for which Lanzheron was awarded the Order of St. George 2-nd degree.

The 1813 autumn march of the year Langeron began, commanding the 42-thousandth corps as part of the Silesian army of Prussian Field Marshal Blucher. In the battle of Katzbach, his corps was the left wing of the Russian-Prussian troops and, during the pursuit of the French, beat off their 22 guns and forced General Pyoujo’s division to lay down weapon. For participation in the battles during the campaign of the Silesian Army, Langeron was granted a nice image of the Highest Name on epaulets.

On the first day of the Battle of the Nations near Leipzig, 4 (16) of October 1813, Langeron very successfully acted near the village Viderich. 6 (18) October, he fought on the north wing under the command of the Swedish Prince Bernadot (former Napoleon Marshal). Langeron was ordered to take the village of Schönfeld, which formed the support of the left flank of Napoleon’s army and occupied by the corps of generals Marmont and Sugam. Resolutely and skillfully, Langeron conducted an artillery attack on this village: the enemy was knocked out of Schönfeld, and Langeron, the only one of all the allied generals, managed to break through the position of the French army under Leipzig. At night, the corps of Langeron was transferred to the outskirts of the city of Galle, and the next morning he captured the redoubt that was here: his battalions broke into the city and by their appearance at Elster Bridge contributed to the explosion of the latter, which led to the complete defeat of the French.

18 (30) March 1814, near Paris, the troops of Langeron captured Montmartre, from which led the Russian artillery threatened the capital of France. For the capture of the Montmartre heights Langeron was awarded from the hands of the king the Order of St. Andrew the First-Called - the highest state award of the Russian Empire.

In April, 1815, Langeron again marched, leading a convoy of IV and VI infantry corps: he reached Alsace and Lorraine, where he was entrusted with the siege of French fortresses.

At the end of the Napoleonic Wars 10 (22) in November 1815, Lanzheron was appointed first by the Kherson military governor, and in 1822 - by the Novorossiysk governor-general in Odessa, but the following year he was dismissed from service and went abroad.

During the Russian-Turkish war of 1828-1829, Langeron accompanied Emperor Nicholas I to the army on the Danube. At the end of July 1828, he was entrusted with command of all troops in Wallachia, as well as monitoring the fortresses of Zhurzhey, Kale and Turno, of which the last two were taken by storm, for which Lanzheron was appointed chief of the Ryazhsky infantry regiment and was given one gun from the numbers taken in the city of Calais.

In March 1829, Langeron was dismissed from the army for health reasons. He settled in Odessa, where his health began to improve. Being a man of activity, Lanzheron contributed to the development of Odessa, where in honor of him one of the streets was named Lanzheronovskaya.

4 (16) July 1831, in St. Petersburg, Count Alexander Fedorovich Langeron died of cholera and was buried in Odessa in the Catholic Cathedral of the Blessed Virgin Mary.

Langeron left (in French) a detailed memoir about his time and about all the 19 campaigns in which he participated.

For military services to Russia, the portrait of Langeron was placed in the Military Gallery of the Winter Palace.

Ctrl Enter
Noticed a mistake Highlight text and press. Ctrl + Enter
We are
Praised as a hero, praised as a traitor: Prince Barclay de TollyField Marshal Mikhail Bogdanovich Barclay de Tolly
10 comments
Information
Dear reader, to leave comments on the publication, you must to register.