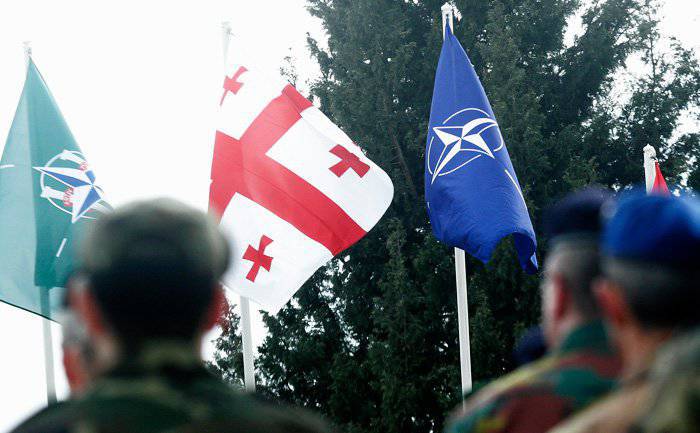 The center of NATO will appear in Georgia in 2015 year. This October 17 was announced by Defense Minister Irakli Alasania in an interview with Imedi TV. According to him, an agreement on this was reached by the countries of the North Atlantic Alliance during the September NATO summit in Wales.

- It will be the center of NATO and Georgia for exercises and assessments, it will be a joint center, but there will be the infrastructure of the Ministry of Defense, where both NATO military personnel and alliance partners will be trained, he added, adding that the center will also take place assessment of preparedness and certification of the trained.

According to local media, such a center can be located at the Wazian military base, but there is no official confirmation of this. For reference: on this base there were once Russian troops who left Georgia according to the decisions of the OSCE Istanbul Summit.

Alasania noted: a special logistics infrastructure is being created in parallel with the center - NATO countries will help Tbilisi with this.

- It was decided that the military exercises of the NATO countries will be held regularly in Georgia. Also, NATO ships will regularly visit Georgia.
According to him, "joint exercises of the military of NATO and Georgia will become another deterrent to the growing aggressiveness of Russia, seen from Georgia recently." The minister also said that NATO is sending high-ranking military officers to Tbilisi, who will monitor the implementation of the Georgia-NATO package. This package provides for the creation of a joint training base, a military school for the training of military personnel from different countries, a logistics center that will assist in organizing exercises, receiving and sending military of other countries.

“A group of NATO specialists will monitor the implementation of the package’s points under the General Staff of our armed forces,” Alasania said.
It should be noted that one training center on NATO standards is already operating in Georgia. Thus, as part of the bilateral Georgian-French military cooperation, France helped build a military base in Sachkhere, namely, a training center for mountain training. It is designed for simultaneous training of 130 military personnel, equipped according to the standards of the alliance, and entered service in early August of the 2008 year. During the operation to force Georgia to peace, when Russia inflicted crushing damage to Georgian troops, the French ambassador to Tbilisi, Eric Fournier, pointedly arrived at the mountain rifle base. According to media reports, of all the training camps where soldiers of the Georgian army were trained, only the base in Sachkhere survived. By the way, representatives of Armenia (by the way, the country is a member of the CSTO) at one time were trained under the program of mountain training on this basis.

It can be assumed that now we are talking about the appearance in Georgia of a larger center for training servicemen according to NATO standards, where emphasis will be placed not only on mountain training.

The editor-in-chief of the National Strategy Issues Journal, RISI Adjar Kurtov remarks: despite the changes that have taken place in Georgia’s domestic policy lately, the country's foreign policy toward joining the North Atlantic Alliance (taken by Eduard Shevardnadze) has not changed.

- The opening of the training center is not a landmark event. The fact is that when the Russian military bases were withdrawn from Georgia (from Batumi - 12-I military base, from Akhalkalaki - 62-I, from Vaziani - 137-I military base), then, as a rule, they were occupied not only by Georgian military personnel . Instructors from the same States or the North Atlantic Alliance appeared there.

A well-known fact: on the threshold of the tragic events of August 2008, Georgia was actively “pumped up” weapons and foreign experts. In this sense, the emergence of another training center is not critical for our security, that is, it will not be the weight in the balance that would incline the alliance to fulfill the dreams of Georgian politicians.

We remember the defeat of the trained army of Mikhail Saakashvili, so if the Georgians and the NATO members want it, then let them spend money. But if they turn up again, they will be rebuffed much faster and more seriously, because in this case, the Russian military will not have to overcome the Greater Caucasus Mountain Range, since, based on the norms of international law and bilateral agreements, they are currently deployed in Abkhazia and Republic of South Ossetia.

However, the Russian leadership should not be deceived. Although Georgia will not be accepted into the alliance, this does not mean that the military bloc will abandon its plans for the South Caucasus in general and for Georgia in particular. NATO will continue to create the appropriate infrastructure, to feed Georgian politicians with promises, to invent some kind of individual programs for Tbilisi, which are supposedly transitional steps to the alliance.

But it is important that with such methods Brussels (the headquarters of not only the European Union, but also NATO) gradually affects the overall situation in the region. If this center really opens in Georgia, then, probably, not only NATO, Ukrainian and Georgian military personnel will be trained there, but representatives of the South Caucasus states - Armenia, Azerbaijan will also be invited ... But Armenia is a member of the CSTO, Azerbaijan balances on different boards under the guise of being a member country of the Non-Aligned Movement.

Thus, Georgia is a kind of springboard for the penetration of NATO into the South Caucasus region. And the North Atlantic politicians are well aware that if they do not work and do not use the available opportunities (and they have opportunities in Georgia), then their competitors, Russia and those states that are interested in an alliance, will fill the “vacuum of power” in the South Caucasus Finally, it stopped expanding to where it should not expand a priori, since the very name of the bloc says that it is up to him to deal with security issues in the North Atlantic, but not in the South Caucasus.

The coordinator of the working group of the Center for the Study of Central Asia and the Caucasus of the Institute of Oriental Studies of the Russian Academy of Sciences Alexander Skakov also believes that the NATO Regional Center may indeed appear soon in Georgia, but for Russia this is not critical.

- This kind of creeping integration of Tbilisi into NATO continues, but there can be no talk of a full-fledged admission or provision of a clear action plan for the country's accession to NATO. This integration began a long time ago, it will continue further, but no one will accept a country that represents a danger to the bloc due to unresolved territorial issues. Therefore, the form of "soft expansion" is chosen.

I think the words of the Georgian Minister of Defense can be trusted, and such a training center can really appear, given the current nature of relations between Russia and NATO. As for our interests, the new agreement on alliance and integration between the Russian Federation and Abkhazia, which involves the creation of a unified armed forces - a kind of response to such plans of Georgia. And although Georgian Prime Minister Irakli Garibashvili expressed concern about this fact, the treaty does not mean that Russia has taken a step towards any military measures, it’s just creating new dividing lines in the Caucasus, which is quite reasonable.

As for the seconded NATO military leaders, this is not news. Western experts have long been preparing the Georgian military, but as the 2008 events of the year showed, the cost of such training is nothing. Moreover, I do not think that the Georgian leadership will take any radical steps. Now in power there are more or less rationally minded people who are not eager to re-engage in military adventures. However, it is clear that the situation may change in the event of a global explosion in the entire South Caucasus, for example, if a new war begins in Nagorno-Karabakh. The conflict will inevitably tighten not only Nagorno-Karabakh, Armenia and Azerbaijan into its funnel, but also the adjacent territories - namely Iran, Russia and Georgia ...
"SP": - In the media periodically there are reports of some disagreements between the former Prime Minister Ivanishvili and his creature - the current President Margvelashvili, between Margvelashvili and Garibashvili ...

- The leadership of Georgia is by no means a monolith, it is torn by contradictions. And, perhaps, these contradictions will only grow with time. While everything is more or less restrained, however, what will happen next and where it will lead is unknown.

- In this center any training can be conducted, on any profile. But the training of Georgian military personnel according to NATO standards reminds me personally of options in computer games, when, after some pumping, the characters get plus five points to strength and two plus - to endurance. All this is simply ridiculous and does not matter to us, ”said Alexander Khramchikhin, deputy director of the Institute for Political and Military Analysis.
The former member of the Georgian parliament, the head of the Institute of Management Strategy (Georgia), Peter Mamradze, believes that Defense Minister Alasania is bluffing.

- The fact is that the representative of the NATO information centers in Georgia made a much more moderate statement in response to the words of our minister. Moreover, situations where certain representatives of the Georgian leadership are bluffing, talking about NATO bases, centers, and even about the need for speedy integration, and then representatives of the United States or NATO disavow such messages from high tribunes, will not surprise anyone in Georgia. This has become regular. The fact is that our prime minister, who has all the executive power in his hands, cannot control all members of the government, and the same minister of defense has his own party, and therefore there is such a dissonance.

Meanwhile, an acute shortage of state thinking in our officials affects Georgian-Russian relations. In addition, NATO ships constantly come to us, American military leaders pay regular visits, and the Russian leadership sometimes reacts quite seriously to this.
Georgia (or what was left of it as a result of the destructive rule of Saakashvili) is already in a difficult situation, and only because Russia opened the doors to its market, has our agriculture come to life at least somehow ...