Gregory Vanin, Alexander Zhilin. The goals of the war in the Donbass

October 21 2014
28
The war in the Donbass is under the banner of Russian patriotism and the struggle against the remnants of Nazism, against the revenge of Bandera. This is the position of Novorossiya and people sympathizing with it. Kiev also called the war an anti-terrorist operation (ATO) to restore constitutional order. Almost according to Yeltsin, when the Chechen war started in 1994 by the very same person provoked by him. The war in the Donbass began Turchinov and Yatsenyuk as the highest officials of the government, given to them by the second Maidan. After the withdrawal of the Crimea from Ukraine and its annexation to Russia, Turchinov and Yatsenyuk responded hysterically and reflexively with punitive actions to the protest of the Southeast against lawlessness and Nazi ideology. 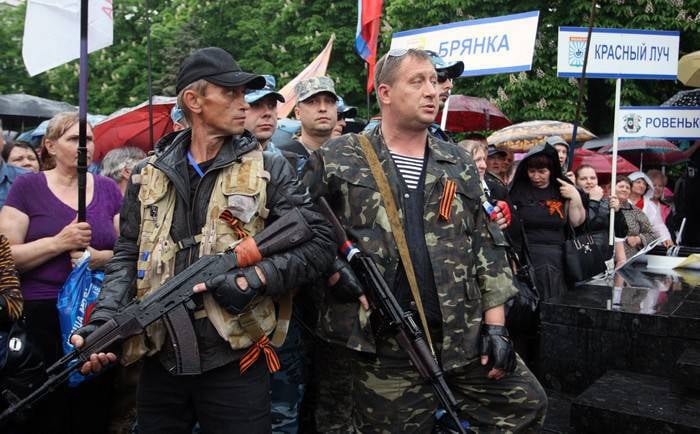 The protest was at first peaceful and the idea of ​​federalizing the country put forward by the protesters did not violate the very state integrity of Ukraine, but contradicted the goals of the junta, which came to power through the Maidan with the support of the interested West. Plus, the fear of the separation of industrial regions, which intensified after the meeting between Turchinov and Lukashenko in Kiev, who directly told Turchinov that Crimea was surrendered to Kiev without a fight, means voluntarily de facto. What is now stupid to make claims to the Kremlin.

Ukrainian troops and the fleet left the Crimea, not resisting. Turchinov and Ukrainian strategists decided to take revenge for the insult and shame in the Donbas. And at the same time demoralize the social and territorial base of the Party of Regions, a stronghold of supporters of Yanukovych. But, having started a large-scale armed punitive action in the Donbass by forces of the army and Maidan formations, by hired battalions of Kolomoisky and other adventurers, Turchinov and Yatsenyuk in fact tore Ukraine into pieces, destroying all conditions for compromise and reconciliation. The police operation by intentions and in fact turned into a real act of genocide of its own people on grounds of race, faith and belief. The election of President Poroshenko did not change the situation, but only aggravated. Southeast took up weapondefending against the cruel arbitrariness of punitive.

The war in Ukraine reveals multilateral and transnational interests. In Ukraine itself, there is another redistribution of property and a fight between oligarchs for a share in the so-called US shale project. With the loss of the Crimea, this fight only escalated. While the interests of Russian oligarchs and corporations in this conflict and their participation in it are silent. But in this part of interests, compromises and a peaceful resolution of contradictions are possible with sufficient political will, above all, of the Ukrainian authorities. The Minsk negotiations and the truce became possible as a result of direct contacts of Western, Ukrainian and Russian representatives of big business, held the day before abroad.

It became obvious that the main danger lies in persistent attempts to thwart the implementation of the Minsk Memorandum of Ceasefire in the South-East of Ukraine in order to continue the genocide. These attempts are made purposefully by the Ukrainian units, which carry out the will of the parallel centers of power, not subject to either Poroshenko or Yatsenyuk. From these centers comes the threat not only of New Russia, but also of Kiev itself. The main center of this kind is the SBU headed by Nalyvaichenko, who has actually become the Ukrainian division of the CIA since 2004. Other centers competing with each other are also influenced by the US departments and the State Department. First of all, these are the Ministry of Internal Affairs with Avakov, the formations of Parubiya, the “Right Sector” with Yarosh, private illegal formations of Kolomoisky and Lyashko, and other private individuals. Maybe they cheated in the shale project? Or vice versa, did they promise any preferences for disrupting the world? One thing is clear, the same Kolomoisky, having billions in dollars withdrawn from Ukraine in Western banks, cannot be uncontrollable by those who control these banks ...

The war in Donbass pursues the following geopolitical goals. Split the Russians, set them against each other and destroy the basis of the re-creation of the USSR as the unifying Russian idea. Bleed Ukraine and Russia, create around and within Russia hostile regimes based on Russophobia in the form of horseshoe Baltic - Ukraine - Crimea - Caucasus - Volga region (Nazism plus radical ideas of the Islamists) with increasing influence on the South Urals and Central Asia. Move the war from the Donbass to Russia and its regions. Cut off Europe from the Russian Federation and control all gas and oil supplies, other raw materials from Russia to Europe, in order to change the hydrocarbon market in favor of US transnational companies. In the conditions of financial crisis and the threat of falling dollar, this is a matter of life and death of the American economy and the survival of the American state. This is the agony of American foreign policy. The agonizing colossus is capable of anything.