The three tasks of Putin, Novorossia and Ukraine 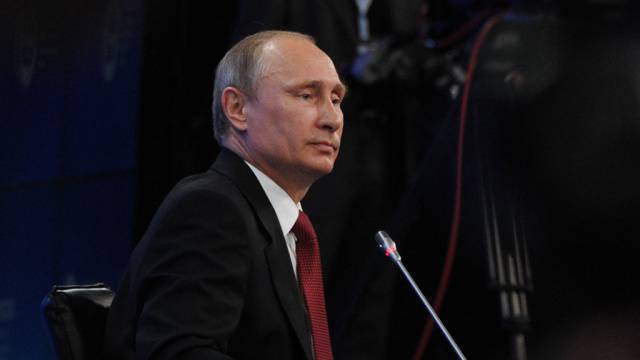 In addition to the cease-fire regime, which in fact does not stop for a minute in the Donbass, there are two more points that attract close attention. First, the elections to the Verkhovna Rada of Ukraine 26 of October, which the authorities of the self-proclaimed DNR and LNR have already outlawed on their territory. Secondly, the elections to the authorities of the republics themselves 9 November, which Kiev also does not recognize, as it appointed its elections to local authorities on December 7. That's all they think: who will overpower whom in this electoral game, who will win - the capital or the rebels.

In fact, all this does not matter. For Donbass, it seems, everything was decided far beyond its borders. And even outside of Kiev. In Washington and Moscow, they warned Brussels, Paris and Berlin, where they habitually took a visor towards America and sneaked at Russia.

However, the situation is really stuck. Strictly according to Trotsky Lev Davidovich: no war, no peace, and blood flows in streams from both sides. And the most popular thought today is that Russia, under the weight of sanctions, allegedly “merges Novorossia”: withdraws “polite” personnel, slows down supplies, stops overly active militia commanders who know the price for the inflated cheeks of Ukrainian generals and future people's deputies from punitive and police commanders battalions. Thanks to them, oh, and Rada will be in Ukraine - no one will find an average IQ with the latest mine detectors even under the table in the deputy buffet.

But that's not the point. "Drain", of course, is the place to be. In the sense that Moscow could: a) not encourage Donbass with its unconditional help and example of the Crimea; b) not to stop the militias, when they picked up the course and went on the offensive, turning the valiant Ukrainian army led by Geletey into a non-aromatic substance. However, it seems that other arrangements worked out, predetermined by opaque reasons. Moscow and Washington are most likely prepared to transfer the civil war in the Donbass to the category of a “frozen conflict”. As in Transnistria, Nagorno-Karabakh, Abkhazia, South Ossetia or North Cyprus. There will be, of course, its own specifics, but the “frost” comes to the long-suffering land not only in the climatic sense of the word. The USA and Russia achieved only intermediate goals in the Donbass - they are today recorded in the form of a semi-victory (Novorossia) and a semi-defeat (Ukraine).
For the United States, the burning Donbass was both needed and remains a pin, a splinter, an awl in the underbrush of Russia and the eternal causative agent of anxiety in relations between Moscow and Brussels (as the capital of the EU). Russia, having failed to translate Novorussia under its complete control (like the Crimea), will try to fix some kind of buffer in the Donbass, which does not allow the Americans and the NATO members who are submissive to them to brawl too directly at the borders. And a springboard for the future expansion of the Russian world at the first slightest possibility.

The fact that Russia will “merge Novorossia” definitively, as Lutsenko or other political scientists and media whores predict in Ukraine, is unlikely. If this happens, it will be not only for a long time how the idea of ​​“gathering Russian lands” will be launched, but also the technology of “draining” the main land collector of modernity, President Vladimir Putin, will be launched. Many in Russia, and especially abroad, are asleep and see how this is happening and Putin is losing his credibility. They rub their sweaty little hands, involuntarily erupt at night, they come from anticipation. But this is precisely why, as it seems to me, this is unrealistic: Putin has never once allowed anyone to enjoy his own humiliation. Or he is not allowed to do this: there are always as many patriots in a hundred liberastov-Westerners in Russia.

However, another thing is also obvious: the international sanctions imposed on Russia by the Western world showed that Russia was partially overstrained in Novorossia and took the hat not according to Senka. Because the Russian economy turned out to be too open to strikes and sanctions and tied to Western economies. They imposed sanctions, and it became clear that the government talkers in the White House only waxed at television cameras about the modernization of production, about the growth of the Russian national economy, about the diversification of supplies of all that is possible and necessary, about import substitution, about its own financial and banking and payment systems. In reality, all this was only on paper, in reports to Putin. The government of Dmitry Medvedev only eats off oil and gas dollars, blowing bubbles of complacency and in fact deceiving both his people and the president.

Of course, this could be some kind of diabolical-Byzantine plan — to throw dust into the eyes and put down the vigilance of the Western world with the supposed weakness of Russia, but in fact gather strength and then strike fully armed and omnipotent.
But for some reason it seems that this is just a version - this is just what many people like who rely on Russia. But she is not strong enough yet ...

Now she does not have too much free money and resources to keep Novorossia in full and to restore everything that has been destroyed by the Ukrainian troops of the ATO and the cartels — the housing stock and infrastructure. And also to find markets for the products of the industry of Donbass, to modernize production, to overcome unemployment, to solve other socio-economic problems of the population, etc., etc. This all costs a pretty penny for anyone who wants to take Donbass under the wing.

Therefore, the first task that Putin is currently deciding is to find money for the maintenance of Donbass in a more or less digestible form. The ideal option is to create a certain “club of friends of Donbass” and work on restoring the ruins of the war to pieces. In addition to Russia, this “club” must include Ukraine, the European Union and, of course, the main failed beneficiary of the slaughter in the Donbas from overseas - the United States. All of them, by the way, promised to help with money.

Two other tasks that are directly related to Putin and affect the future of Novorossia and, of course, Ukraine, the Russian president will have to solve in Russia itself. First, to determine how to avoid the burden of sanctions with minimal losses and to extract the maximum benefit from them. That is, to make the Russian economy not closed to world markets, technologies and financial flows, but to be maximally protected and able to resist unfair competition caused by geopolitical tasks and vile politicking of the West. As it is now demonstrated by the United States, trying in every way to weaken Russia.

Putin will succeed in this - there will also be money for the Novorossia project. A lot of money, and to confront their influence on the integrity of Ukraine Kiev will be oh so difficult. Despite the support of the West. Although already without money it is clear that Ukraine will never be the same as before. Profukali in Kiev such an opportunity, when meekly and mindlessly went in the wake of Western wishes. However, at the lackeys there is always a poor choice when they need to thank the owners for their alms ...
Secondly, Putin urgently needs to do something with those whom the Russian political analyst Oleg Bondarenko extremely successfully called “Parmesan in the civil service”. Those who work in different positions in the bodies of all branches of government in Russia use it to run their own business, withdraw capital (including a weak corruption component) abroad, buying everything there (from real estate to industrial enterprises and sports clubs) and therefore does not bind its the fate and fate of their descendants with Russia. With life in it.

It is these people in Russia who are already called the “sixth column”. They are not open enemies, like the “fifth column”, but involuntary silent saboteurs who inhibit everything connected with the real independence and power of Russia. It is simply unprofitable for them - enrichment flows will be interrupted if the law triumphs and the same corruption is defeated. It is they, these “Parmesans”, who are terribly afraid of personal sanctions against Russian officials. Sanctions simply will not allow them to fly to the West every weekend and enjoy it there for "hard earned" in Russia.

It is this mob, as Lermontov said, eagerly standing by the throne, is actually slowing down the Novorossiya project, forcing Kiev to make concessions in gas matters, putting sticks in the wheels of Donbas militiamen, stopping them, for example, before Mariupol, which they would take run in a matter of hours and a half months ago. The "Parmesans" have, as it seems to them, two iron excuses for such deviant behavior and conciliation with the neo-Nazi're coming out. They convince the Kremlin that if: a) Russia actively supports Novorossia, this will cause a general, even stronger Russophobia in the rest of Ukraine; b) if they do not give way to Kiev in the gas issue, then Russia will be accused of freezing the "fraternal people" on purpose, and this again leads to an escalation of Russophobia.

Sermyazhnaya truth in this, of course. "The Sixth Column" is really difficult to live in Moscow without Parmesan, oysters and jamon. But another result of this approach to Ukraine is also known: the Russian leadership today is trying to achieve in the Ukrainian elite the love of those who, Russia, will never fall in love with it for any money. And he.it people who do not see their fate without Russia and defend their views with weapons in hand. That is he.it Novorossia.

Russia does not acquire new friends, but pays in Kiev to political speculators and beggars who take the money, spoil the cash, but spit on coat tails, should the benefactors inadvertently turn their back on such "friends." And in parallel, the Kremlin pushes away genuine friends. So much for all the "soft power" in Russian. What a contrast with the actions of the USA!

... And the elections in Ukraine and New Russia, of course, take place. And they unequivocally legitimize both the Ukrainian government (after the president and the parliament with the government), and the power of Novorossia. Between them will begin a new round of competition, who is more legitimate. But what does this have to do with the above? All will decide not in Kiev ...