"Lugansk notes" of a resident of Lugansk

When in the evening you go from the center to Cambod, it is dark ahead. Yesterday, we noticed luminous windows somewhere in the Pushkin region, before that was not there. On the way, the railway station - there are only clock and traffic lights. At the end of summer, a shell fell on the way and smashed windows in a "covered pedestrian crossing" in a blast wave. These were thick glass from floor to ceiling, and they povletlet in very many places. We arrived just in the morning after the bombing, huge pieces were lying on the floor, and they were already swept. Now there are no fragments, of course, but the glass has not yet been inserted, benches for passengers are standing directly above the abyss. If you go in the evening, and even with the child - extreme sensations are guaranteed. Draft takes out, darkness, you do not see the stairs ... Now at the station they sell tickets, that is, the ticket office is working, the alert system is working (in the summer someone from the staff went to the platform and shouted that the train was delayed, but nobody could get out, and people waited, not knowing for sure whether they would leave or not, now at least they announce flights). At the end of September, the Kiev train began to go, and now there are still passenger trains. From day to day they should launch a flight to Moscow. So during the day life there is in full swing, but in the evening it is dark and cold.
Open different stores. Where they give light, where without light, one can come across handwritten announcements: "We work." In the central market, everything was broken and burned from Detsky Mir to the fish. Now everything is being repaired, painted, boiled, scavenged, and around, where there are whole stalls, the sellers are already standing and trading.
There is still no light in the passage near the Globus, it’s scary to even go there - people don’t bump into each other just because they follow the rules of the road, go to the right. The transition near "Russia" was the same at the beginning of September, and now there is light and almost everything is open.
Open circles for children, the radio is full of such announcements. When I came to record my daughter in the House of Creativity in October, they told me perplexedly that not earlier than November, check out the numbers of the 15, find out, and a week later they called themselves - yesterday there was the 1 session. Instead of ten groups last year they scored two, and those are incomplete, but I think this is the beginning.
These are trifles in comparison with the pre-war level, but they show dynamics. The dynamics are positive. Every day there is a small but good news.

Legend about the good Natsik

Over the summer, I heard the legend about good Natsik several times. If militiamen come to the city, the Ukrainian military are forced to bomb the city and erase it from the face of the earth, but if there are no militia in the city, the Natsik are sweet and kind, take nothing without demand, pay for everything, help the local people to dig potatoes and one even married local girlfriend. This wedding was localized in two places, and I recently had to talk with a resident of one of them. I immediately asked if it was true that you had it? To which I received the answer "For the first time I hear."
People from the Lugansk territories occupied by Ukraine are really grateful to Plotnitsky, who said that this is all our land and we will liberate these areas. Now they are not talking about good Natsik. Now they mainly tell how they rob empty houses and even houses where there are people, how they send home appliances and things to Ukraine by “New Post”. There are plenty of such stories. Pensions are paid there, and salaries have not been paid since summer. People in the occupied areas are afraid of war, but they don’t want the Ukrainian authorities either.

The newspaper "XXI century" - one of the three publications that are now published in Lugansk. Finally, after so many years, newspapers began to print really important and useful information - what works, what opens, which buses run, train schedules, and addresses of free pharmacies and canteens. Also here are interviews with members of the government and official statements and warnings of the new government.
Some Ukrainian commission in Kiev ordered the closure of the Lugansk newspaper. In response, the newspaper ordered the commission to close. :)
By the way, what a great excuse for wrestlers with censorship and for freedom of speech is to walk along the Maidan with a banned newspaper in their hands. I know people who fought bravely and courageously against censorship under Yanukovych in Lugansk, why should they not show their courage even now, especially since all these people are in Kiev now? Gee-gee.

The only "sounding" source of news is Lugansk radio on the phone, we try to listen, although it discharges the battery.

If only you had come to this city ...
Elena Zaslavskaya

Dear Nastya,
If only you had come to this city and saw it!
He is like a bird with broken wings.
He's like a plane in a steep dive.
He is like a man with an open chest.

And in the throat becomes lumpy
And thoughts are confused,
And in the eyes of a salty sea.

But I still write to you,
So that you can see his face for a moment
Aged over one summer war
For many years.

Roads dug funnels.
The wires hang like broken strings.
In the walls of houses there are holes.

Open wounds
Spatio-temporal breaks
In the past, in peacetime.

When
We were happy,
We were together,
We were…

Do you remember how we rode a bike
Overtaken bus,
And people waved us out of the windows.

You wrote on my door:
Let your heart go
Will lead in bondage.

My heart wandered.
My heart is a fornication.
My heart got lost.
And never come back home.

It’s cold in my house without glass
But the stars look right into the apartment,
Drink tea with condensed milk.

Cats near the houses are knocked together
The crows in the parks scream like that
What is heard per kilometer.

Strolling dogs
Not afraid of people
And as people are afraid of shelling.

People say to each other: Hello!
And this greeting takes on old meaning,
Long lost and worn out.

I know that if I do not send you a letter today,
Tomorrow there may be no light
And maybe not me
But I fall asleep anyway happy.
And only in the morning I still want to cry.

Now many are returning to Lugansk, who for a while, for winter clothes, and I have met with those who are forever. They came from Ukraine and I learned from them how strangely the Ukrainians imagine life in Lugansk. This can not even be refuted, because if you don’t watch TV, you won’t even think about it. One of such things is that in Kiev they are sure that Ukraine is sending humanitarian aid to Lugansk. If anyone thinks so, do not think so more, it is not true. Ukrainian humanitarian aid was not here and there. Stew, condensed milk, tea - all Russian-made, Ukrainian nothing at all. Children's humanitarian aid is also from Russia.

Humanitarian aid is given to both Luhansk residents and residents of the region. Previously, there was such a system - it was necessary to come on Tuesday or Friday and get a number. The queues were - they should be called crowds. The check-in indicated the time, you come at this time - there is no one there at all, you get without problems with your passport and birth certificate. There was no light, everyone wrote down in large notebooks, except for the package with humanitarian aid, they also gave out a note with your number in one of the magazines, such a handwritten database.

Now the system has changed, now there is a live queue. All are divided into 4 groups, by the first letter of the child’s last name, and these 4 queues stand at the 4-m tables. People come from the area, many find it difficult to get 2 times, so they did it. In September they gave help to children up to 14 years, now - up to 7. Products are not enough, how much is for the little ones. 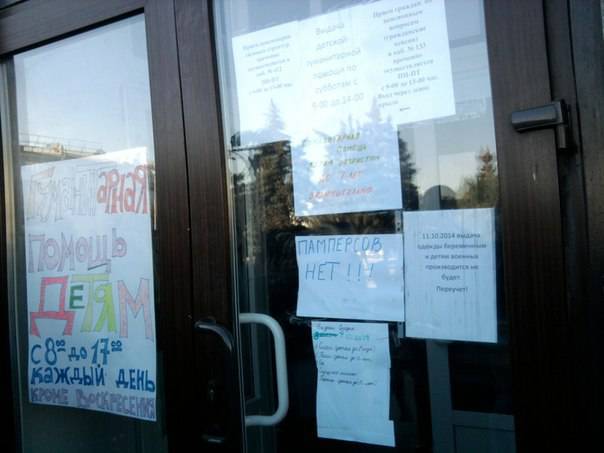