Sergey Dorenko: they came to take a piss from under the American fence - yelping 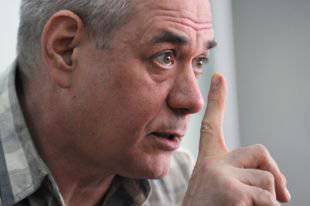 October 18 Sergey Dorenko marks 55 years. On the eve of the anniversary, a well-known journalist, editor-in-chief of the radio station “Moscow Says Talk” answered the AIF questions.

Vladimir Polupanov, AiF: Sergey Leonidovich, there is such a chaos in Ukraine today that one will believe Victor Pelevin, who writes in a new novel: “They distributed special cookies on the Maidan, people still have psychosis”.

Sergey Dorenko: Do ​​you remember the painting by Repin “Zaporozhtsy”, in which they write a letter to the Turkish Sultan? It was an obscene message: the Cossacks wrote obscenities to the Turkish Sultan and were touched by their own rudeness. And we were touched with them. Here they are, the Ukrainians! Dashing! “... With talent, you can burst - in response, the Ukrainian-lad lips laugh condescendingly,” Mayakovsky writes. Ukrainian cynicism and rejection of the authorities, described by Mayakovsky, caused him affection. He liked that Ukrainians subvert any institutions. Ukrainian - in principle, the destroyer of institutions.

- Everything. This is a fundamental difference between the Ukrainians and the Belarusians. I give an example: if the aliens suddenly steal the presidents of Russia, Belarus and Ukraine, how long will the citizens of these countries follow the order by inertia? If Lukashenka is kidnapped, the Belarusians will follow the most cruel order (to sweep the streets, paint curbs, process farmlands, etc.) for another six months. Even without shouts, everything will be done as in the case of the dad. Why? Because the Belarusian himself wants order. If the aliens kidnap the sovereign power of Russia, the Russians, I think, without a shout, without anger, will obey the order for another two weeks. And after that go peddle. And what are the Ukrainians? If there is no president, and accordingly there will be no laws, courts, nothing at all, they will live without an orgy and chaos of 20 seconds. And after 20 seconds, they will start chopping each other with axes. Such is the people. Whatever you say in Ukraine, even just “hello”, the next phrase of your interlocutor will be: “And who are you?” The challenge and destruction, in my opinion, are the national character traits of Ukrainians.

- And it says a man with the last name Dorenko.

- Yes, I am Ukrainian, I know it by myself. Country Ukraine is deeply unhappy. Because there are people like me, 40 of millions, which break any institutions at all ... Today in Ukraine there are zero existing institutions. We ourselves suffer from a lack of institutions in Russia. We still have not built the institution of the court, we have at the initial stage of the institution of parliamentarism, it is still terrible. But in Russia, in any case, we have an institute of executive authority, a throne that either the king, or the general secretary, or the president occupies. We have reverence for the throne. Inside every Russian head, even the most freedom-loving, there is an understanding that the throne is the center of our Russian universe. And the Ukrainians do not have it at all.

- In Europe, they do not understand this and therefore impose sanctions against Russia?

- Do you know that the sanctions were imposed not for the people, but (as it was believed in American intelligence and the State Department) based on the hysterical anti-Putin reaction of the elites who make decisions in the Russian Federation? Elites are corrupt - what's the truth. Elites do not think of their future inside Russia - which is also true. The calculation was that they would rebel, overthrow Putin and put an American puppet in his place. But this turned out to be untrue.

- Our elite was not so corrupt?

- It is corrupt, all the last 20 years Russian elites individually joined NATO: they got citizenship, bought real estate and business, provided the future for their children, etc. NATO and hoped that the elites would influence the decisions of the president. But the country was too big. We can calmly repel the treacherous elite.

- No, this layer will be significantly less. We can reject the treacherous elite, like a crust on a sore. She exfoliate and let them rot there. But we also understand that some of the people at this threshold test will give up on NATO and Europe and return to Russia.

- You operate with such loud categories: “traitor”, “corrupt”, etc. But there are just people who may be mistaken. Maybe not worth one size fits all?

- I have simple categories. I don’t demand like-mindedness or loyalty from people whom I recruit to the Moscow Talk Moscow radio station. I demand that each person say to himself loudly, looking in the mirror: I, my children and my grandchildren will live in my beloved country of Russia. From now on, I'm talking to you. I traveled a lot, lived in Africa and Latin America for a long time - and always looked at the return ticket with love and prayer inspiration. I knew I would be back.

Dialogue is not important

- I'm talking about something else. I also do not share the position of Makarevich, but everyone, especially such a well-known, has the right to speak, even if it does not coincide with the opinion of the majority. Why poison him for it?

- A person has the right to opinion, but he has no right to be a puppet of scum, he has no right to moral decline. If Makarevich criticized the power essentially in the interests of his beloved Russia, he would not necessarily be my enemy. And I might want to hear it. But Makarevich says: I was invited, they put me on a bus, they took me, they gave me a microphone, they put me in a pose. He says all this in a passive voice, in essence, as a village idiot who was taken outside the house and fucking ... and. I would expect such explanations from the village idiot, and not from such an advanced citizen, calling for citizenship. He pretends to be a weak-willed creature with whom they have made “this.”

- We still have to build relationships with the Ukrainians. Let Makarevich and ridiculous, but at least some attempt to establish this dialogue!

- Yes, we have to live together with the Ukrainians. But the main thing is not a dialogue, but national human dignity. Russia is such that it will not allow anyone to wipe their feet on themselves. Our ideals are such that we will always protect our Russian world. But from now on, please come in for a dialogue, but not for yelping from under the American fence. If you come in for a dialogue - sit down, brothers. If you come to pull out from under the American fence - yelp. Until you get tired. Maybe someday we will forgive. But while Kiev behaves ashamed. And this brothers? Let him fix it first.