October 20 2014
145
Over the past few centuries, military equipment and weapons have been constantly evolving. The necessity of having both of them led to repeated technical breakthroughs, new types of offensive weapons were invented, which made it possible to strike at enemy forces from a distance not only hundreds, but thousands of kilometers. However, in the modern world it is impossible to say that individual small weapon It became an anachronism, since remote warfare has an effect only in cases when it comes to the destruction of the enemy’s military and industrial infrastructure, but not at all in manpower.

The main common features of the assault rifles of the new generation is the wide use of light alloys and plastics, which makes it possible to make the weapon much easier and reduce the cost of production. In addition, modern models use collimator and optical sights, a modular design, the ability to install a large range of additional equipment: tactical lights, muzzle and grenade launchers, silencers and laser designators.

Despite the difficult situation, Ukraine does not stand aside from the production of new types of weapons and military equipment. So, in particular, on the official website of the Ukrainian scientific and production association "Fort" there was information about two new variants of Israeli-made assault rifles Galil ACE - "Fort-227" and "Fort-228".

The Ukrainian Fort-227 rifle is similar to the Israeli Galil ACE 22 carbine, and the Fort-228 is Galil ACE 31.

The rifles of the Ukrainian production of the “Fort” family, like the Israeli Galil ACE, is an automatic weapon, which is a kind of a descendant of the Kalashnikov assault rifle.

This family of automatic weapons is characterized by high ergonomics, ease of use and equipment with additional accessories. In addition, Fort-227 and Fort-228 use the most common types of ammunition (5,56 x45, and 7,62 x39 according to NATO standards).

The assault rifles and assault rifles "Fort-227" and "Fort-228" use vapor-automatic equipment with a long stroke gas piston, which is located above the barrel. The receiver has high strength and great resource due to the fact that it is made of steel. The cover of the receiver is also made of steel, and the pistol grip, trigger guard and the neck of the magazine receiver are made of high-strength plastic. The fuse, which is also the mode switch, is duplicated on both sides and makes it possible to make both single shots and automatic fire. To prevent the ingress of dust, foreign objects and dirt into the mechanisms of the weapon, a spring-loaded dustproof shutter is provided, which covers the slot for the handle. The handle itself is on the left side and is connected to the slide frame.

Cartridges are fed from detachable box stores. For each caliber the number of cartridges in the store is different. For millimeter caliber 5,56 - 35 cartridges are provided in the magazine, for 7,62 x39 caliber - 30 cartridges. Automatic shutter lag is provided in the machines. The telescopic plastic butt is adjustable in length, and the rubber damping pad is provided in the 7,62 caliber. As for the sights, the “Fort” rifles provide an adjustable front sight in the earphone and a diopter reversible rear sight, which is installed in the rear of the receiver cover. In addition, "Fort-227", in contrast to the "Fort-228" has brackets for fastening a bayonet-knife.

Rifle "Fort-227" can operate in automatic and semi-automatic mode. At length, it has 760 millimeters with a folded butt and 845 - with the spread out. The length of the barrel is 332 millimeters. The weight of the rifle with full magazine is 4,12 kilograms, with a blank - 3,7 kilograms. This rifle is designed for cartridge 5,56x45 millimeters, has a rate of 700 shots per minute, while the initial speed of the bullet is 850 meters per second. The target range is about 500 meters.

Rifle "Fort-228" can also work in both automatic and semi-automatic mode. Has a length of 642 millimeter with a folded butt and 762 - with unfolded. The length of the barrel of this rifle reaches 215 millimeters. Its weight with a loaded magazine is 3,9 kilograms, with an empty one - 3,4 kilograms. The rifle is designed for bullets of caliber 7,62x39 millimeters, in the store - 30 cartridges. The initial speed of a bullet reaches 600 meters per second, while the rate of fire is 650 shots per minute, and the target range is about 800 meters. 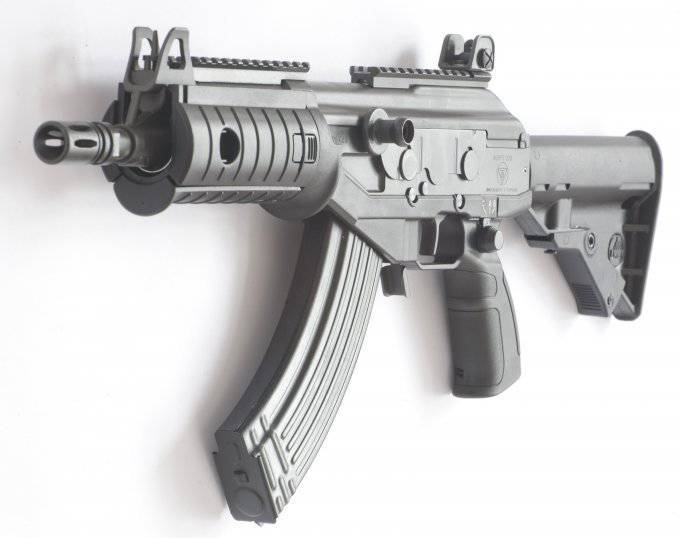 Among the advantages of the Ukrainian rifles "Fort-227" and "Fort-228" it should be noted compactness, modern ergonomic design, lightness, the presence of two modes of firing - automatic and semi-automatic. In addition, for more accurate shooting in these variants, an exceptional trigger mechanism is used, which is based on the Galil sniper rifle variant. Both options tested in combat conditions, and have already managed to prove their reliability in emergency, adverse and unforeseen situations. Both rifles can be used at night due to the presence of a convenient mechanical sight and a telescopic butt. Among the advantages should be noted, and ease of maintenance, because for disassembling weapons do not require any additional tools.

Thus, it can be said that the Ukrainian-made assault rifles “Fort-227” and “Fort-228” are a new step in the shooting segment of the Ukrainian defense complex.

In the light of recent events in Ukraine, it becomes quite obvious that, with the active support of Western states and the United States, Ukraine will gradually be included in the scope of the standards of these states, including the military. Therefore, despite the widespread use of caliber cartridges in 5,45x39 and 7,62x39 millimeters in Ukraine, in the near future they will be gradually replaced by cartridges under NATO standards. Both the Fort-227 and Fort-228 rifles are clear proof that these changes have already begun.