"Inescapable determination" to start a war 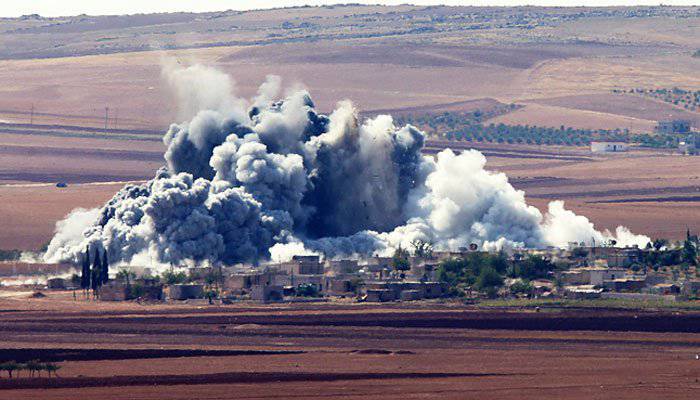 The United States will conduct the largest, since the days of “Desert Storm,” an international special operation against the Islamic State (IS) terrorist group banned in a number of countries in Syria and Iraq. She received the name "Intractable determination" (Inherent Resolve). About this on Wednesday evening, October 15, reported the Pentagon.

“The name should reflect the unshakable determination and deep US commitment to the task of destroying the Islamic State terrorist group. In addition, the name indirectly reflects the danger that terrorism carries to Iraq, the Middle East and the entire international community, ”says a press release from the American department.

Earlier, the United States said that over the past two days 22 air strikes were inflicted on its IG positions. As a result, the attack of militants in the city of Kobani was slowed down, according to the website of the US Central Command. In addition, the units of the Lebanese army was able to stop the attempts of the IG to seize several heights on the Syrian-Lebanese border.

US President Barack Obama has already said that the goal of the international coalition is the complete destruction of the "Islamic state". According to Obama, it is imperative that the IS militants no longer pose a threat to either the region or the world community.

“I am deeply concerned about the attack on Coban. The United States will support air strikes in this area, ”said Barack Obama at a meeting with the heads of military departments of the coalition countries 20, which took place on October 15.

What will in fact be represented by "Inescapable determination", will the Americans succeed in defeating the terrorists?

“A geopolitical moment is present in the special operation against the IG,” said Academician of the Academy of Geopolitical Problems, Colonel-General of the Reserve Leonid Ivashov. - All experts understand that the "Islamic state" is the brainchild of the United States themselves. It was the Americans who fostered the Islamists, because they wanted to have a force in the region that would threaten Iran and Syria. But today, the IS is out of control, and this is a serious defeat for the current administration of the White House.

In the US, they understand that now with the "Islamic State" you need to do something. Single airstrikes on the positions of the IG do not give effect. To stop the insane mass of armed militants, we need a ground operation. And just the ground forces of the Americans today are weak.

"SP": - What follows from this conclusion?

- It can be assumed that the United States within the framework of “Inevitable Determination” will nevertheless be limited to a powerful aviation plaque supported by naval artillery. They are unlikely to throw American soldiers, or even mercenaries from Latin American countries, into the business: such a move will inevitably lead to large casualties among the coalition forces, and will hit Barack Obama in the most serious way.

But another option is not excluded: the United States is mobilizing soldiers from the countries of the Persian Gulf - Saudi Arabia, possibly some North African countries. In this case, some Arabs will fight against others.

"SP": - Militants of the IG are fighting well?

- Well - once they capture the territory and defeat the regular parts of the Iraqi army. Yes, they are fighting with a comparable opponent and the same weapons. But the main thing is that offensive fanaticism is present in the terrorists of the “Islamic State”; they are not afraid of death. There are no such qualities for the pro-American land grouping.

"SP": - What should be the number of such groups?

- At least three divisions of ground forces capable of fighting "in the field."

"SP": - The newspaper The New York Times writes that "Inescapable determination" will be similar to "The Storm in the Desert." Is this really true?

- I do not think. During the “Storm in the Desert”, the Americans were opposed by the traditional units of the armed forces of Iraq, in addition, the troops of Saddam Hussein were tied to certain places of deployment and theaters of military operations. In short, it was a classic war.

In the operation "Inescapable determination" everything will be different. First of all, there will not be a united front, and this will not allow the coalition forces to turn in full force. As we see, today the Americans already have a complete superiority over the "Islamic state" in the air, but this does not bring victory.

"SP": - As the "inescapable determination" will affect Russia?

- This is a key question. Speaking at the 69 session of the UN General Assembly at the end of September, Barack Obama named the actions of Russia in Europe and the terrorists of the Islamic State in Syria and Iraq among the world's major threats. And on Thursday, October 16, US Secretary of Defense Chuck Hagel called on the US military to be prepared to "deal" with the Russian army, which, he said, "is on the threshold of NATO."
This, in my opinion, suggests that the preparation for the special operation “Inescapable Decision” may also result in the preparation of an operation against Russia.

- It can be a quick strike on Russian territory without the use of nuclear weapons. The concept of a global non-nuclear strike on Russia was approved by 18 in January 2003, George W. Bush. It involves, within four to six hours, strikes several thousand cruise missiles at our strategic nuclear forces, control centers and critical infrastructure. It is assumed that after such a strike Russia will be paralyzed, and the Americans will be able to present us with an ultimatum.

Let me remind you: the bombing of Libya and Yugoslavia also began with the accusation of the leadership of these countries in all mortal sins. Now the Americans are demonizing Russia from the highest rostrum - the UN General Assembly. This is hardly done thoughtlessly ...

“The current tactics of the coalition against the IS are clearly ineffective,” said the director of the Center for the Study of the Middle East and Central Asia, Colonel Semyon Bagdasarov. - This is evidenced by the fact that the “Islamic State” manages to successfully fight on two fronts. It conducts a large-scale operation in Syrian Kurdistan, and at the same time plans to seize Fallujah and Romadi to advance on Baghdad. All this suggests that militarily IG continues to feel good.

Naturally, the Joint Chiefs of Staff of the United States thinks about what to do in such a situation. At the end of September, the chairman of the committee, General Martin Dempsey, stated that a land operation in Iraq and Syria is necessary for a successful fight against the IS grouping. And so it came to planning a strike.

For the time being, different numbers of the grouping are called for, which is necessary for the operation “Inescapable determination”: from 30 to 50 thousands of servicemen. At the same time, members of the international coalition pretend that there is no Iraqi army in the region - these are 400 thousand people - nor the Kurdish militia groups of the Peshmerga - these are also 200 thousand. Simply, the effectiveness of these armed forces is small, and if the same Iraqi army invades Sunni areas, the situation will also worsen.

“During the special operation, the task will surely be set to take control of two million Mosul and Rakku, the informal capital of the Islamic State.” Probably, mobile groups will be involved, which will be engaged in the defeat of the armed formations of the "Islamic state". I think that to fulfill these tasks a land group of about one hundred thousand people will be needed.

"SP": - Special operation will solve the problem with the IG?

- I think no. Militants of the IG, most likely, will act in the same way as the Afghan Islamists in their time. They themselves will surrender large populated areas, and will go to the countryside, where they will be supported by the local Sunni population. And then the guerrilla war. As Burhanuddin Rabbani, the head of the Islamic Society of Afghanistan, once said, “they (the Soviet troops in Afghanistan) will lose one person per day, and we will lose a hundred, but they will get tired before us and leave.” Similarly, the Americans will get tired and leave Iraq and Syria. And then the monster of the "Islamic State" will come out of the underground - even more powerful and powerful - and will again go on the offensive ...