October 17 2014
68
The Russian president arrived yesterday in the capital of Serbia. Vladimir Putin will take part in celebrating the seventieth anniversary of the liberation of Belgrade from the Nazi invaders. The head of the Russian state made a statement in which he noted that Moscow’s position regarding the independence of Kosovo is unchanged. The European Union states that Serbia treats Russia differently than other European countries. 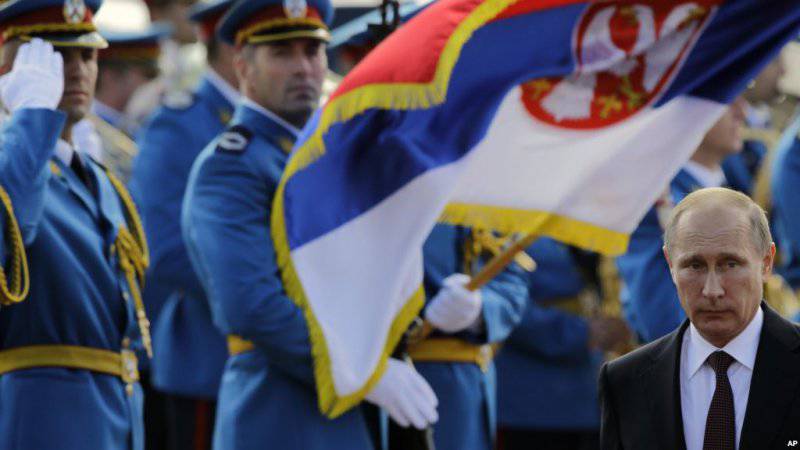 How is the channel "RT", during a meeting with the head of Serbia, Tomislav Nikolic, Russian President Vladimir Putin said that a favorable future awaits Russia and Serbia.

As for the Kosovo issue, Vladimir Putin said: “Russia takes a principled position, it is based not only on our friendship and intimacy, but also on international law and justice. This position is not subject to adjustment. We supported Serbia and intend to support further. ”

“Russia does not trade in friendship,” the president added.

At the end of the negotiations with Nikolic, Vladimir Putin was awarded the Order of the Republic of Serbia, I degree, with the wording “For exceptional merits in the development of friendly relations between the two states”.

Speaking of cooperation between the two countries, it is necessary to highlight the main thing.

TASS reports from Belgrade that following the talks held by Vladimir Putin, Russia and Serbia signed an intergovernmental agreement on military-technical cooperation. The document was signed by the Director of the Federal Service for Military-Technical Cooperation of the Russian Federation, Alexander Fomin, and the Minister of Defense of Serbia, Bratislav Gasic.

According to the agency, Russian Railways International, a subsidiary of Russian Railways, signed an additional agreement with the Serbian Railways in Belgrade on extending the contract for the reconstruction of local railways with a total length of 65 kilometers. The total amount of the agreement is 150 million.

The parties agreed on the supply to Serbia of 27 diesel trains manufactured by Metrovagonmash, which is part of the Russian Transmashholding, and spare parts for them totaling $ 100 million.

It is necessary to say about Russian loans.

As recalled by TASS, an agreement on granting the Republic of Serbia a state export credit in the amount of 800 million, intended for the modernization of railways, was signed in Moscow last January. At the same time, the cost of railway infrastructure development projects is about $ 940 million. The contract signed by 23 in May 2013 of Russian Railways International and JSC Serbian Railways provides for the construction and electrification of 15 kilometers of the second line of the Belgrade-Pančevo railway line sections of the pan-European corridor 112 kilometers in length, reconstruction of the existing and construction of the second track on the Stara Pazova - Novi Sad section in 44 kilometers, reconstruction of the Serbian section of the railway line Belgrade - Bar length 200 km, as well as the supply of diesel trains.

When asked by the reporter about the Serbian course on joining the European Union and the “European vector in the Balkans,” Alexander Vucic spoke about the country's economic difficulties, the difficult legacy that politicians received for the current government from “unjustifiably” raising wages and pensions , eventually creating a "big budget deficit." In addition, Vucic said that Serbia "has no goal to join the European Union in four to five years." Today's task is to complete the reforms so that in 2018-2019. “To be able to tell the European Union about this.” And let them assess in the EU whether the country is suitable for EU enlargement or not.

“... This is not our business. Serbia will live, but it is important to try to achieve this result and carry out these reforms for our own sake. Just as in the context of South Stream, not everything is within the competence of Serbia, but is determined by the treaty of Russia and the European Union. The gas pipeline in Serbia will begin on the border with Bulgaria and end on the border with Hungary, but it cannot pass through Serbia alone. Serbia has done everything in its power. I always strive to ensure that we in Serbia do their work. But it’s not for us to decide if someone wants to admit us to their lineup. ”

And here is another interesting Vucic statement:

“We respect other people, especially those who are responsible for their words, as this is not often the case in politics. I do not respect those people who say one thing in Moscow, two days later they say another to Washington, and in three days they both deny that for Brussels. From me you will never hear a denial. I say the same thing in Brussels, Washington and Moscow. I am not telling you that I am against the European Union, just as I don’t want to say in Brussels that I will impose sanctions against Russia, since I don’t want to impose sanctions against Russia. I think that this is a serious, respectable politician, and not a politician with the aim to please someone. I am looking for Serbia not for love, but for respect. I want Serbia to be a free state, in which the leadership would have the freedom to make decisions. ”

Serbian Ambassador to Russia Slavenko Terzich spoke about Serbia’s unwillingness to “sanction” Russia along with the whole of Europe. In an interview with World 24, a Serbian diplomat said that Serbia is a Russian-friendly country. Despite EU pressure, it will not join the anti-Russian sanctions.

“I have already stated here several times that Serbia is not going to join the sanctions against Russia. Despite the fact that Serbia is preparing to join the European Union, our President, our Prime Minister, and the Foreign Minister said that Serbia will never join the sanctions against Russia. There are many reasons, the most important is the traditional friendship of Serbia and Russia, which has been preserved for many centuries, ”the ambassador said. Utro.ru.

Correspondent "BBC" talked with the deputy editor-in-chief of the television and radio company Serbia, Boyan Brkic.

Speaking about the policy of the Serbian leadership and the economic situation of Serbia, Brkic noted that, on the one hand, Serbia is negotiating with the European Union on membership, and on the other, it wants to maintain friendly relations with Russia. The fact is that without close economic relations with the Russian Federation of Serbia "it would be very difficult to keep finances." “We need very good relations with the Russian Federation and we are trying to preserve it, while not offending the West,” said the deputy editor-in-chief. “It is getting harder and harder, but this is the policy of our leadership, which claims that we want to be friends with both the one and the other.”

Brkic told the BBC about the pressure of the West.

“There is a certain pressure, and sometimes it becomes very strong. The US Ambassador in Belgrade expressed his concern that we only invited Vladimir Putin to the celebration of the 70 anniversary of the liberation of Serbia. He asked why not invite the President of Ukraine and the leaders of other former Soviet republics whose citizens participated in the liberation. There is pressure, but our government asks Brussels and Washington to understand our situation - that Serbia has a very large trade turnover with the Russian Federation, and this is of great importance for our economy. ”

A question was also asked about Putin’s perception in Serbia.

According to Brkić, Putin is "perceived in Serbia as the leader of a brotherly country." Serbs see Putin as a “strong, fair leader” who understands the Serbian position and problems. Brkić reminded the BBC correspondent that "NATO bombed Serbia," and "the Serbian people have not forgotten this."

Today, the interviewee continued, when the majority of citizens in the elections supported the path of Serbia to the EU, “no one is going to refuse friendship with Russia”. Putin is very, very popular in Serbia. It was because of this popularity that the police were forced to ban rallies: “... thousands, tens and tens of thousands of Belgrade residents were going to meet Putin on his way from the airport to the government building ...” T-shirts with portraits of Putin and other souvenirs are sold in Serbia, he added.

In conclusion, a few words about the economic future of Russia and Serbia.

As transmitted TASS, the cumulative volume of investments in Russia and Serbia in the coming 3 of the year will be able to reach 6 billion dollars, or even 10 billion dollars. This was announced by Vladimir Putin after talks with the leadership of Serbia.

“I believe that in the next three years, the total investment will reach 6 billion dollars or even 10 billion dollars,” he said, noting further that trade and economic relations between the two countries are developing successfully: only in the first half of 2014. turnover increased by 17%.

“The Russian investor has already invested 2 billion. $, Are ready to invest more 1 billion. $. Our other company, LUKoil, has invested over $ 300 million. We must diversify our contacts, our economic ties, including in industry and high technologies, ”V. Putin noted.

In addition, the Russian president said that now is an opportune moment for Serbia’s agriculture to occupy a decent niche in the Russian market.

Alexander Vucic responded to this with a statement of readiness to increase the volume of deliveries of pork meat to Russia: “Serbia at the moment is probably the only European country that can export pork meat to the Russian Federation, and in this connection we have now reached unbelievable volumes for ourselves. We are ready to increase our capacities so that we can offer Russia even more. ”

“There are now free niches after the introduction of Russian restrictions on the supply of agricultural products from those countries that have joined or initiated sanctions against Russia. In general, there would be no happiness, but misfortune can help, - Putin said. “I think this is a chance for manufacturers of those countries that want to develop relations with the Russian Federation.” Including “a favorable moment is coming” for Serbia.

Russia, too, will not sit idly. As the president noted, “we are ready to invest in the development of the Serbian agricultural sector together with Russian producers and those producers from Europe who would like to work in Serbia to supply their products to the Russian market.”

Thus, by refusing to support the sanctions policy that Washington has directed for vassal Europe, Serbia, which is plagued by the crisis, undoubtedly won economically, and won long-term. Supplies of Serbian products to Russia are growing at a record pace today, and tomorrow the volume of trade between the two countries will increase significantly. The “sanctioners” from Western Europe, who despised the economy for the sake of politics, actually lost the Russian market. No wonder that there are portraits of Putin everywhere in Belgrade.