- Mosin's sniper rifles of the 1891 / 1930 model are likely to have been removed from the KPA armament and transferred to the RKKG; 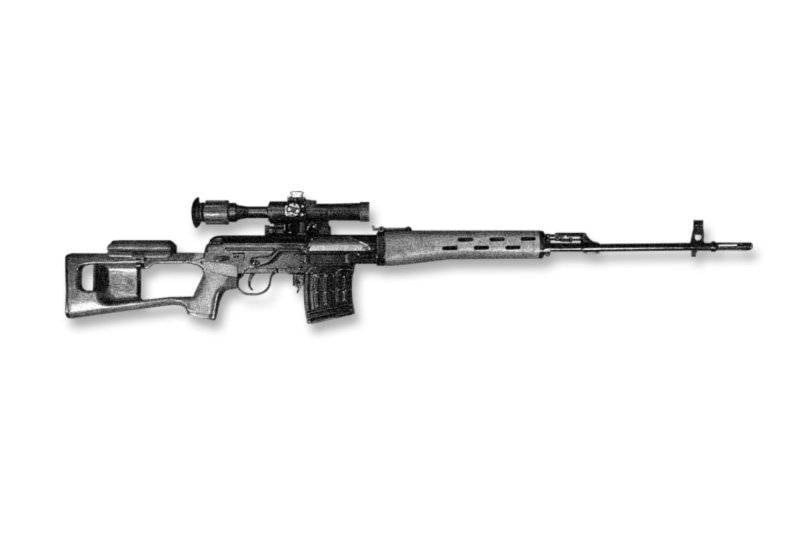 The main KPA light machine gun during the Korean War was the Soviet DP-27, its upgraded version of the PDM and its Chinese copy of Type 53. 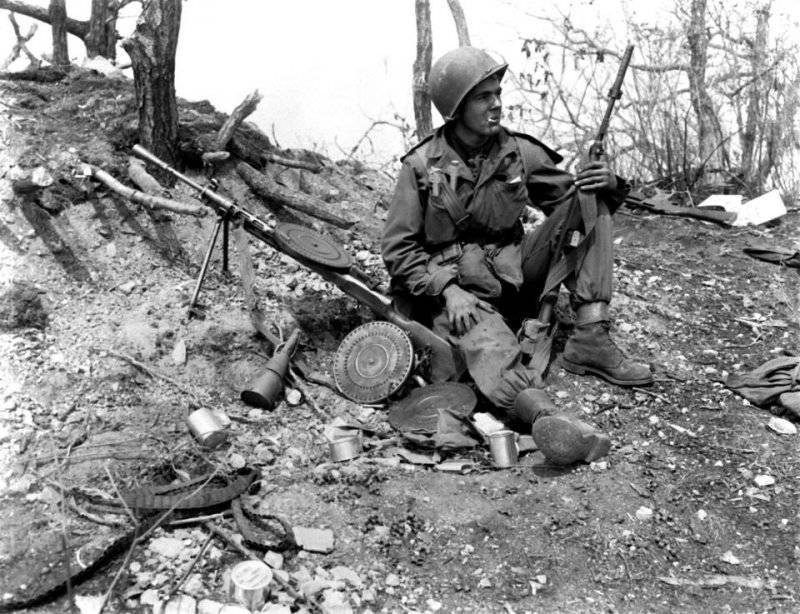 Currently, DP manual machine guns have been decommissioned by the KPA and transferred to militia units - the Workers 'and Peasants' Red Guard (RKKG). 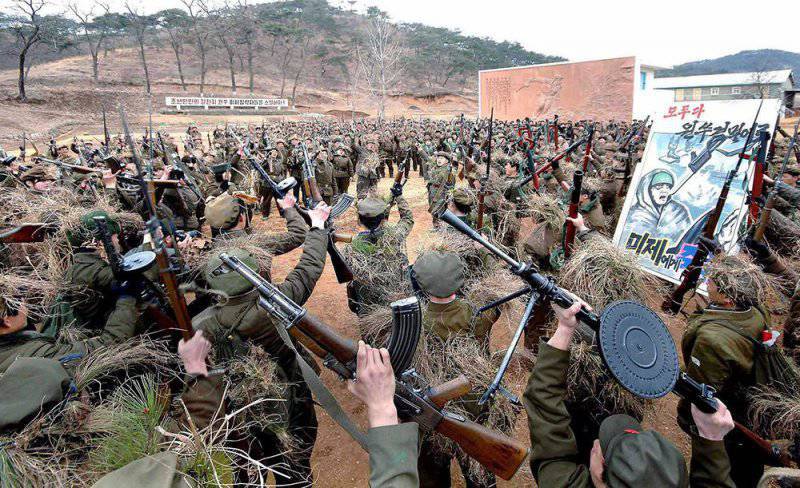 Later in the DPRK, RP-46 light machine guns and their Chinese copies of the 58 Type began to be supplied, which were a DP with a weighted barrel and ammunition from 200 or 250 tapes of ammunition. RP-46 liked the North Koreans so much that they began to release its own copy - "Type 64". Currently, the machine gun is considered obsolete and also transferred to the RKKG. 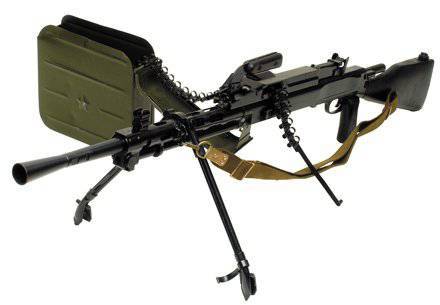 In 1962, under the designation "Type 62" in the DPRK, production of RPD was established. The machine gun held out for a long time in the KPA armament, however, it is now actively transferred to the RKKG, being replaced by the PKK-74 or its North Korean clone. 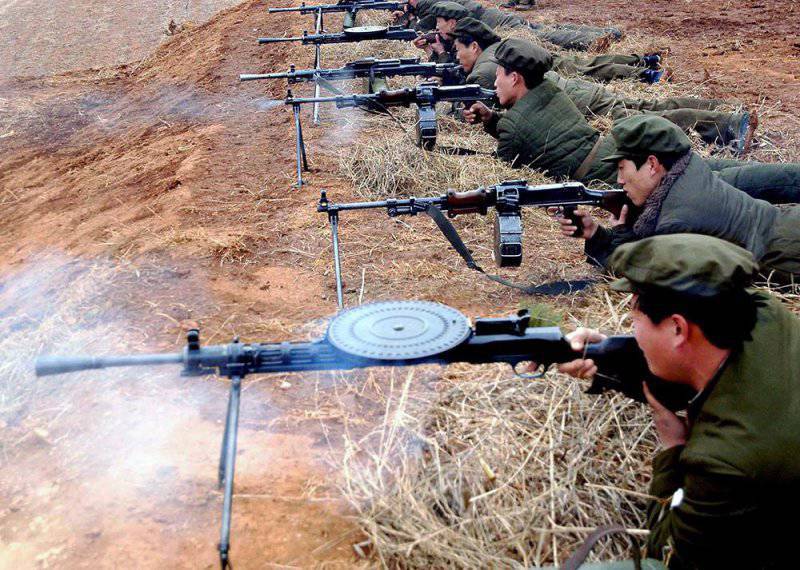 Whether it was in service with the PKK KPA was not precisely established; some sources say that yes, others did not, and that the North Koreans confined themselves to the DUR. I personally have not seen photos of North Korean soldiers with the PKK, if anyone has them, I will be very happy. With the adoption of a copy of the AK-1988 caliber 74 mm in 5,45, the North Koreans adopted the PKK-74 of the same caliber. Whether the PKK-74 is made in the DPRK, I can’t say for sure, but most likely yes, since the photos from the parades show another form of butt and flame arrester, moreover, the forearm of the machine gun is made of plastic rather than wood. 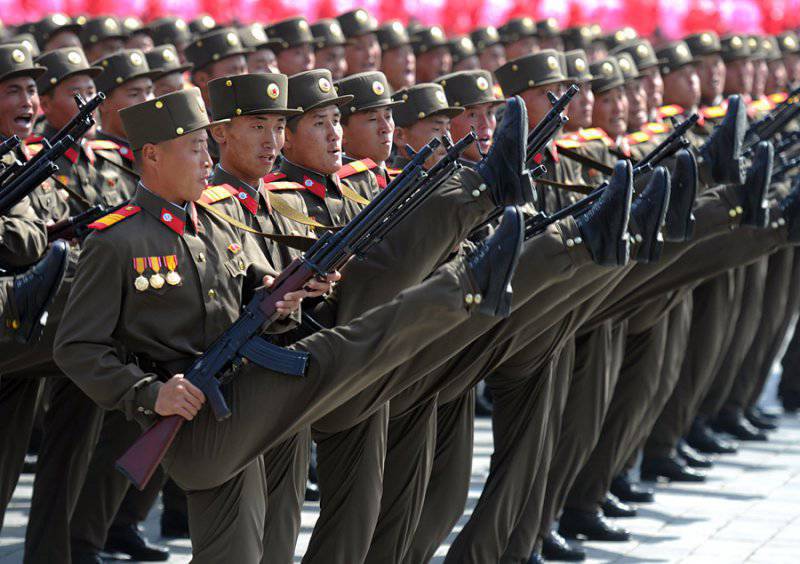 KPA soldiers with RPK-74 at the parade

However, the North Koreans have developed their own machine gun - "Type 73". The concept of a double-powered machine gun (magazine / tape) was probably borrowed from the Czechoslovak machine gun Vz.52, the general layout and design of the main units was taken from the Soviet Kalashnikov PC machine gun. A distinctive feature of the machine gun from the overwhelming majority of foreign analogues is a double power supply: without any change of staff, plug-in devices can be used. weapon top box magazines on 30 cartridges or non-crumbling metal tape with a closed link from a Kalashnikov machine gun.

Light machine gun type 73 uses vapor automatic, locking the barrel by turning the bolt. The fire is conducted from the open shutter, only in automatic mode. Air cooling barrel, quick. Powering cartridges double - can be used in the weapon inserted into the top box-shaped shops of the original design with a capacity of 30 cartridges, or non-crumbling metal tape with a closed link from a Kalashnikov PC machine gun. 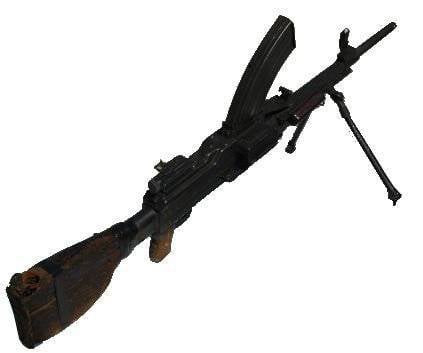 The machine gun is regularly completed with a wooden butt, a pistol grip and a folding metal bipod. Sights are shifted to the left from the axis of the weapon. A distinctive feature of the 73 Type light machine gun is the presence of interchangeable muzzle nozzles that roll over the barrel in front of the gas block. The machine gun is regularly completed with two types of nozzles: one with a muzzle brake-compensator in the front part and the second with a tubular external guide for launching rifle grenades. One of the muzzle nozzles, as a rule, is placed directly on the barrel, the second (currently unused) is mounted under the gas tube of the machine gun.

Machine gun "Type 73". A muzzle is mounted on the barrel - a nozzle for throwing rifle grenades; a replaceable muzzle with a muzzle brake is fixed in the stowed position under the gas tube

BASIC TACTICAL AND TECHNICAL CHARACTERISTICS OF THE "TYPE 73" PULMET: 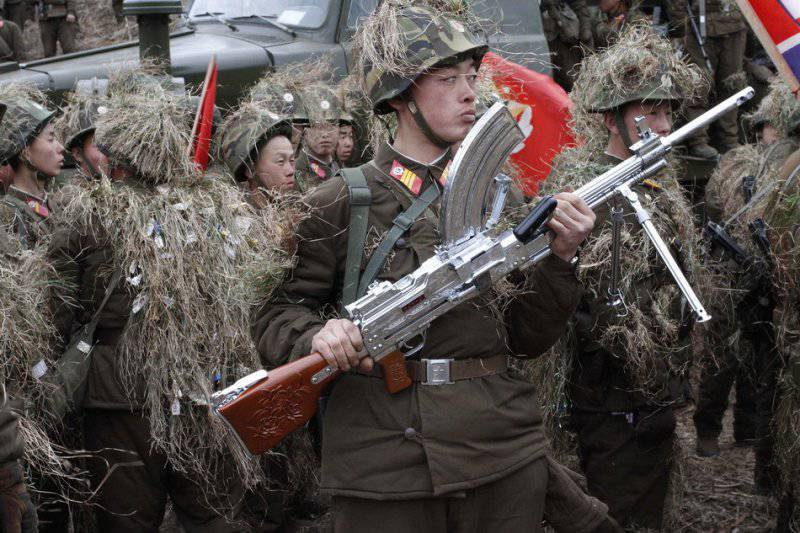 By the way, it is interesting to observe how the calculation of such a machine gun Type 73 in the protection of events in the city: the machine gun is not in the hands, but on the asphalt on the bipod, two calculation men stand side by side and usually observe the terrain in different directions with their backs to each other. 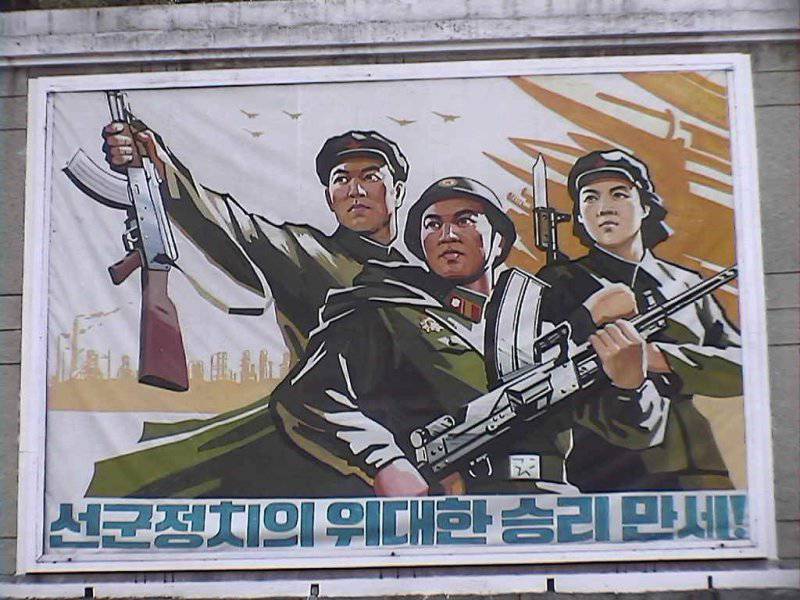 Whether the single PKM machine gun or its Chinese copy "Type 80" was delivered to the DPRK, I do not know. At least, there are no such photo or video testimonials. However, the KPA is armed with PKT and PKB machine guns mounted on military equipment delivered from the USSR. 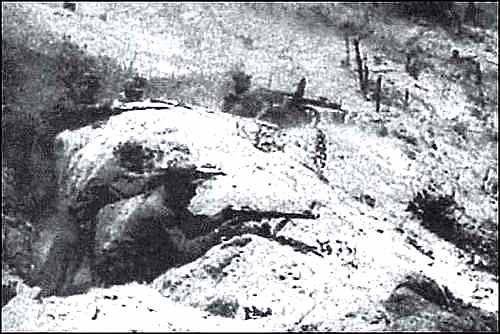 KPA soldiers in the trenches on the 38-th parallel, in the center is visible Maxim machine gun arr. 1910 / 30 of the year 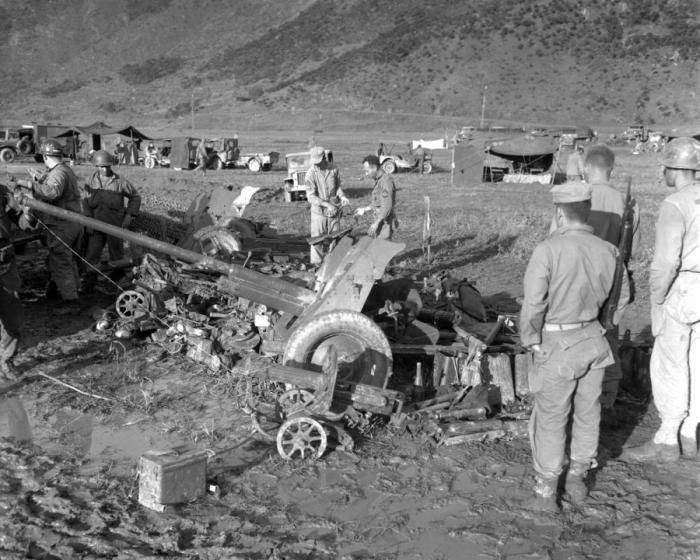 During the war, the KPA was supplied and a single machine gun SG-43.

At present, both the Maxims and SG-43 have been removed from service and transferred either to warehouses or RKKG.

Before and during the Korean War, a large-caliber DShK machine gun was supplied from the USSR, which was used both as infantry and anti-aircraft weapons. 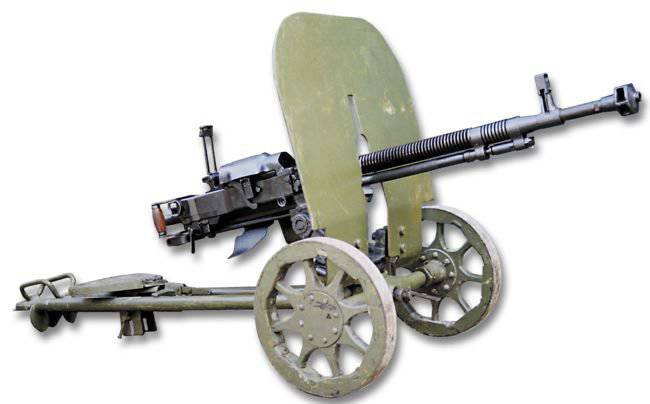 I could not find any information about its current state, it seems that it was stored and replaced with a CPV. Also, I was unable to find evidence of the use of the KNA machine gun NSV-12,7 "Rock".

The main large-caliber machine gun KPA is KPV. It is installed on armored vehicles, in anti-aircraft installations ZPU-1, ZPU-2 and ZPU-4, produced in the DPRK, as weapons of improvised ZSU on the chassis of the truck ZIL-130, produced in the DPRK under a Soviet license. 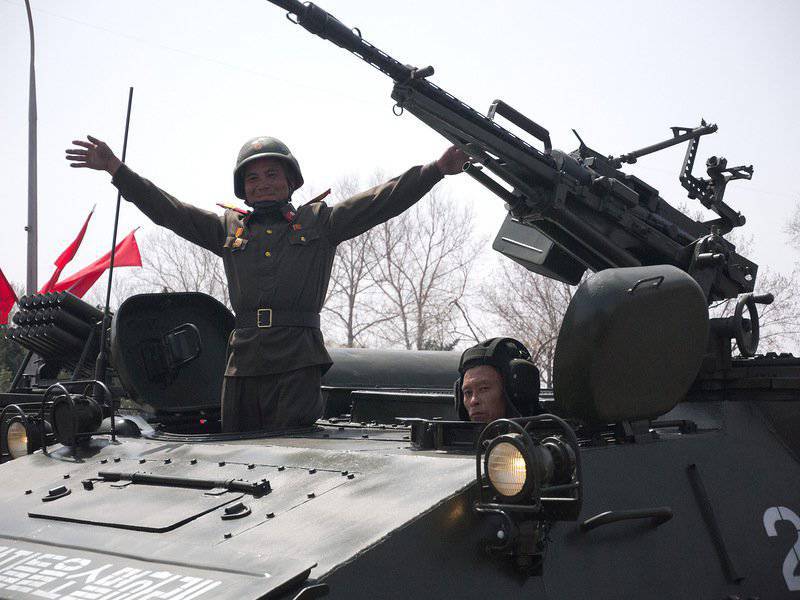 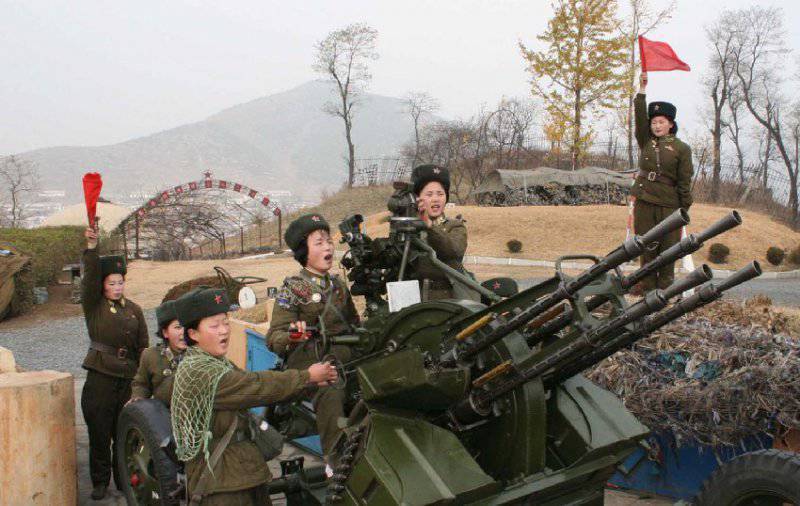 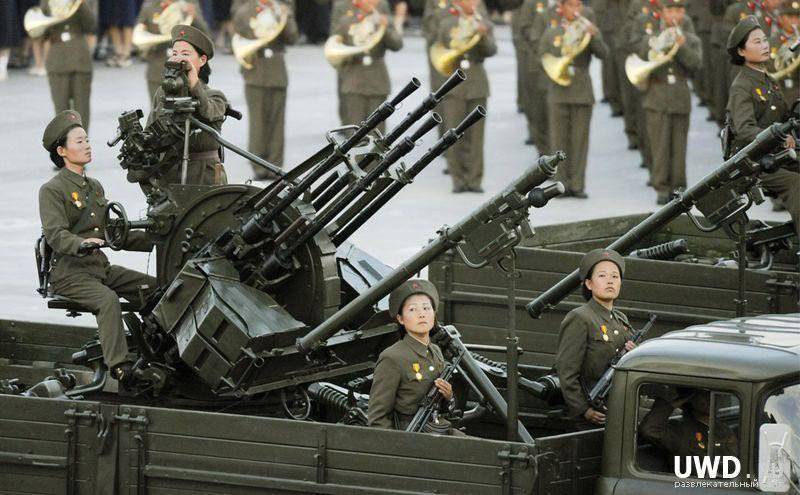 I do not know whether the DPRK is produced in the DPRK, although I think that such a large number of them can hardly be explained by Soviet supplies.

Also in service with the KPA is the AGS-117 “Flame” automatic grenade launcher. Whether it is Soviet deliveries, or a Chinese unlicensed copy, or whether it is produced in the DPRK itself, is unknown. 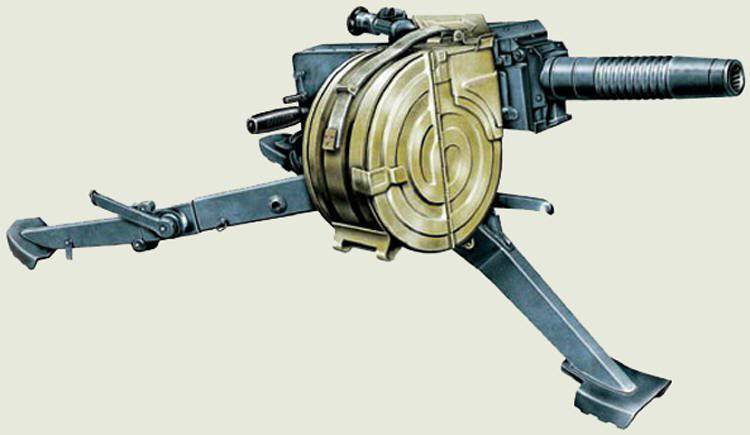 The first KPA infantry anti-tank weapons were the Soviet anti-tank guns PTRD and PTRS model 1941 of the year. 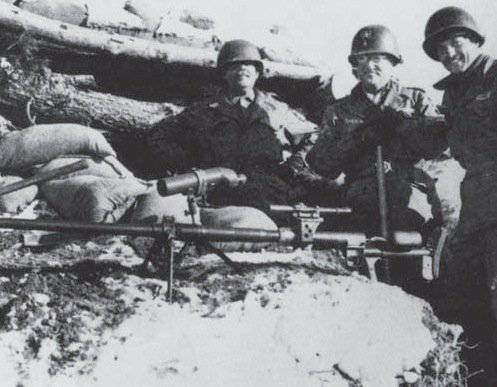 American soldiers in Korea inspect the PTDD, converted for the needs of the sniper. Pay attention to the powerful monocle spotter

During the Korean War, captured American M-20 "Superbazuka" grenade launchers and its Chinese copy of "Type 51" were used.

After the Korean War, Soviet 40-mm RPG-2 anti-tank grenade launchers and their Chinese copies of "Type 56" began to be supplied to the DPRK. Moreover, the RPG was probably produced in the DPRK. Currently, RPGs are decommissioned and transferred to the RKKG. 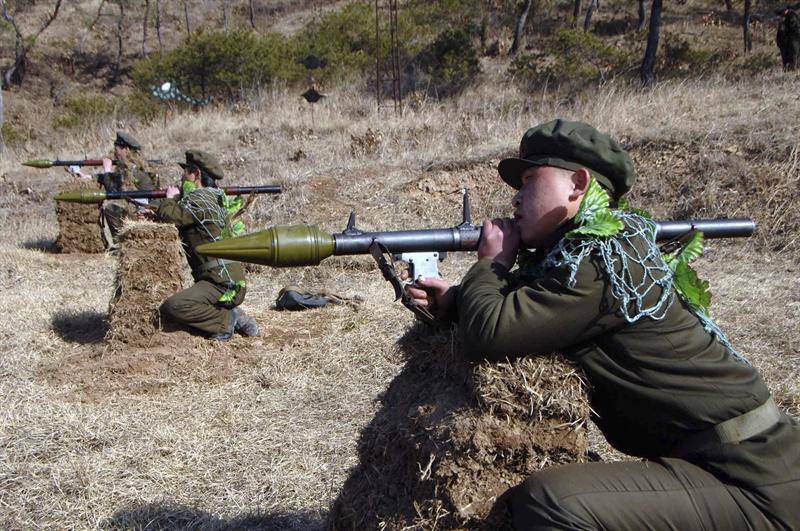 The RPG-2 was replaced in the KPA by another Soviet rocket launcher - the RPG-7. In addition, the DPRK supplied its Chinese copy - "Type 69". Perhaps the RPG-7 is made in the DPRK itself. 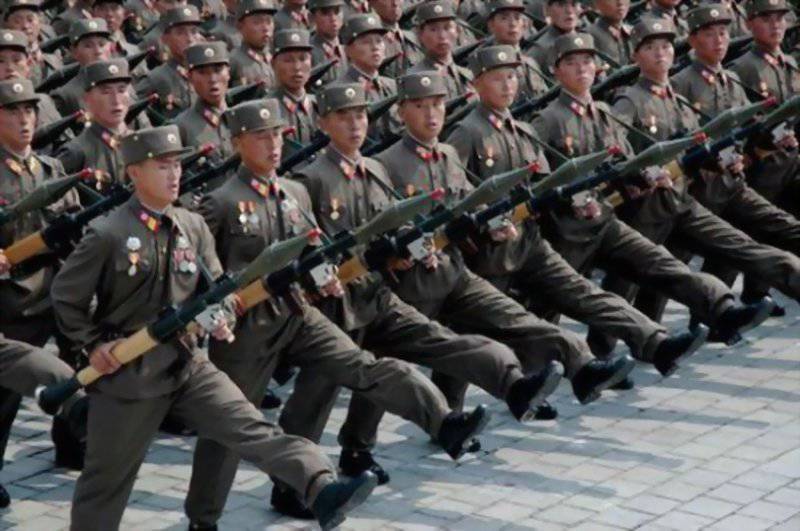 And in the DPRK for the RPG-7 developed a tandem grenade, similar to the Soviet PG-7BP "Summary" 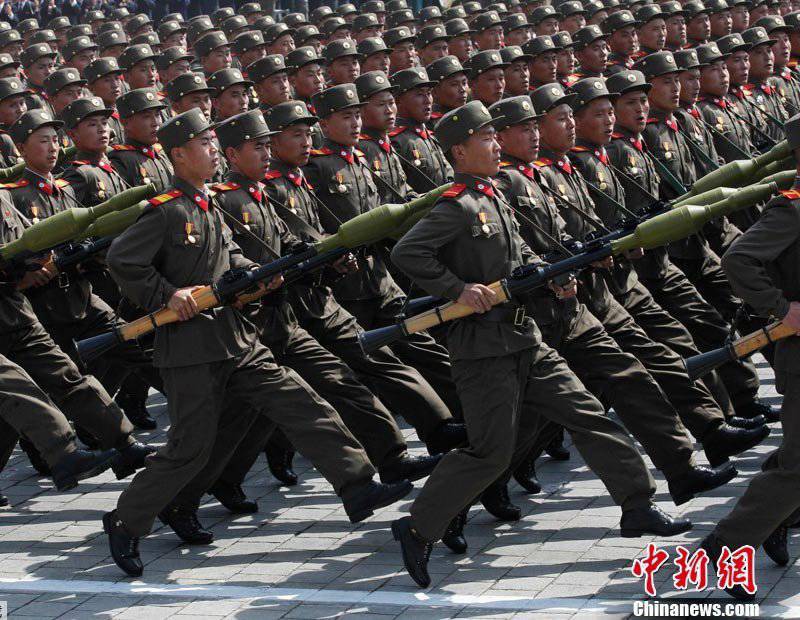 How many RPG-7 and their Chinese and, possibly, North Korean copies are in the DPRK, no one knows ...

However, most recently, the North Korean leader Kim Jong-un was seen with a similar weapon in his hands. 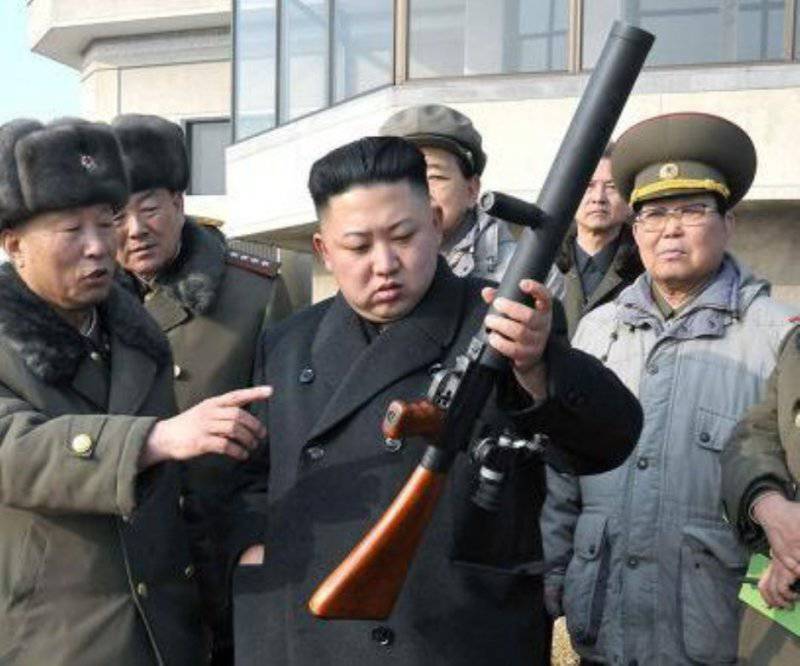 Presumably this is a single-shot grenade launcher- "tipping", quite a large caliber, the name is unknown.

Before and during the Korean War, the ROX-3 knapsack flamethrower was supplied to the DPRK. 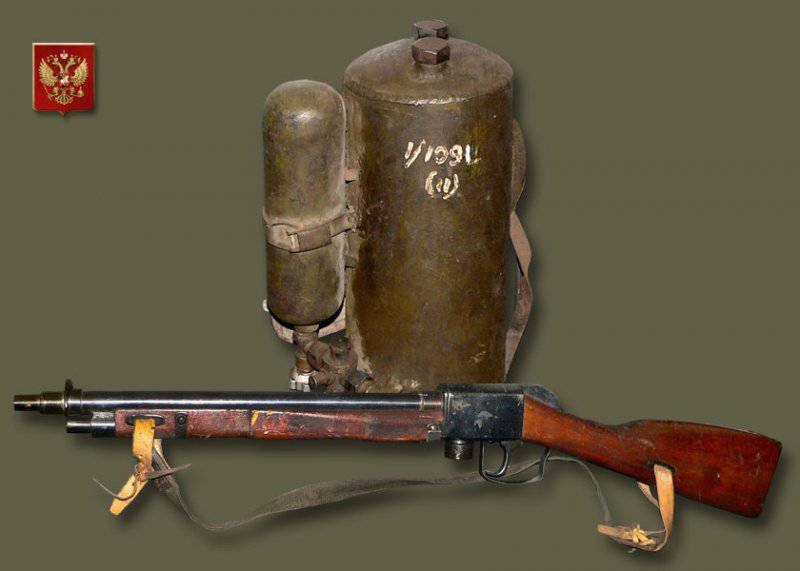 Subsequently, it was replaced by a light infantry flamethrower also of the LPO-50 backpack type and its Chinese copy of the “Type 74”. 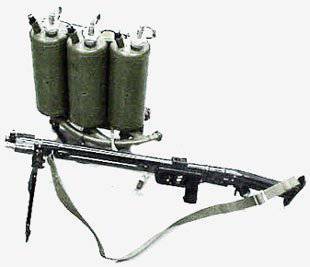 LPO-50 to this day is in service with the KPA. However, at one of the parades a copy of the RPO-A “Bumblebee” rocket flamethrower was demonstrated. According to the explosive impact of its 93-mm caliber on the main types of targets is not inferior to 122-152-mm artillery shells, destroys all life in the amount of 80 м3.

In addition to these flamethrowers, the DPRK also supplied heavy infantry flamethrower TPO-50M, but I don’t know its current status. 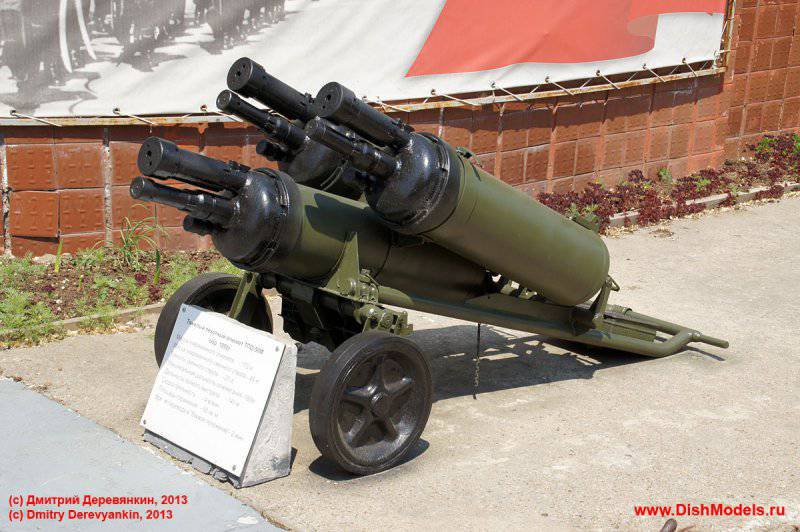