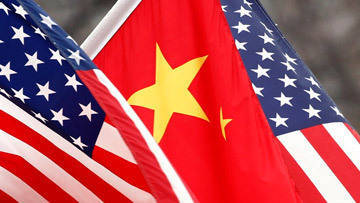 China's largest US lender lashed out at the US authorities for failing to prevent a fall in Washington's credit rating and expressed confidence that the world needs another reserve currency that can replace the dollar.


Gone are the days when the United States could “secure a way out of the problems that they themselves create,” the official PRC agency Xinhua said.

“There should be a new reserve currency in the world that will replace the dollar,” the agency continues.

The Russian authorities have repeatedly spoken about the need for a new reserve currency, proposing the Russian ruble as an option.

India’s response to the US downgrade was also negative, while Japan and South Korea expressed confidence that US government bonds were still credible.

On Friday, the international rating agency Standard & Poor's for the first time lowered the US credit rating by one point.

Until now, the United States had the highest AAA rating, now it is downgraded to AA +.

At the same time, the agency’s forecast was defined as “negative.” This means that analysts do not rule out further downgrade in the coming months.

The main reason for this was the fear of increasing budget deficits.

In addition, the plan adopted by the Congress to reduce the deficit, according to experts, is not effective enough.

For long months in Washington, congressmen heatedly debated a bill to raise the level of public debt.

When rumors of a downgrade in the United States appeared some time ago, anonymous sources in Washington began to make statements in the press that Standard & Poor's analysis contained serious errors.

The same thing after the announcement of the downgrade was announced by a representative of the US Treasury, which, according to him, is a very large amount. "The miscalculation in the valuation of two trillion dollars speaks for itself," he said.

Correspondents Bi-bi-si say that the downgrade will undermine investor confidence in the American economy, which already is not at the highest level due to the large public debt and high unemployment.

2 August Barack Obama signed a law, whose main goal was to reduce the US budget deficit by 2,4 trillion dollars over 10 years.

However, this figure is much lower than 4 trillion, which Washington was advised to save by analysts S & P.

In addition, as stated by the head of the S & P sovereign ratings department, John Chambers, analysts were also influenced by the fact that the US had been too long to raise the national debt ceiling.

“The first thing they should have done was to raise the ceiling as soon as possible in order to avoid debate,” he said in an interview with CNN.

On Friday morning, data were published on unemployment in the United States. Despite the relatively high level in 9,1%, it still turned out to be lower than expected.

Meanwhile, literally on the eve of the New York Stock Exchange experienced the most serious drop in stocks for three years, reminding investors of the event 2008, when the American bank Lehman Brothers collapsed and the global financial crisis began.

Representatives of the financial circles of the two largest partners of the United States in Asia - South Korea and Japan - reacted quite calmly to the message of a decrease in the US credit rating.

"The credibility of the US government treasury obligations and the attitude towards their investment attractiveness on our part will not change as a result of this event," the agency AFP quoted the words of an anonymous representative of the Japanese authorities.

Japan is the second US creditor country after China. It contains most of its foreign reserves in US securities.

A senior representative of the Bank of Korea told Reuters that in the near future he does not expect any noticeable market reaction to this news, noting that this scenario is one of several negative ones that market analysts considered.

“This is a real blow to the American economy, to our position in the world. And the president should be responsible for the fact that he did not demonstrate the proper level of government. So far, he has not proposed any phased plan to return the country back to a flat economic track. Now we see the results of insufficiently competent management, ”said Rick Santorim, who is going to fight for the right to run for the Republican presidency.

Senate Democratic leader Harry Reid, in turn, said that the downgrade of the S & P demonstrated the importance of "a balanced approach to reducing the budget deficit, in which it is necessary to combine a reduction in government spending and measures to increase revenue."

Among such measures, he listed the waiver of tax breaks for wealthy and oil companies.

We are in Yandex Zen
The keys to the world are in the hands of Russia
Twice two - not always four, or how do American rating agencies work
5 comments
Information
Dear reader, to leave comments on the publication, you must to register.