Orders and medals of the Russian Empire. Order of St. George

October 16 2014
6
The Order of St. George the Great Martyr and Victorious was established by decree of Empress Catherine II on November 26 of the year 1769. The award was intended to be issued solely for military merit, the statute of the order stated: "Neither a high breed, nor getting wounds to the enemy does not give the right to be granted this order, but it is given only to those who distinguished themselves with a particularly courageous act." In addition, this award envisaged to serve for serviceable service in officer ranks for at least 25 years.

The very first draft of the new order and its statute was submitted to the empress as early as 1765, but was not approved by a sufficiently demanding Catherine. As a result, it was refined and corrected for a long time. As a result, on November 26. 1769 of the year in St. Petersburg in the Winter Palace was held a solemn ceremony, which marked the beginning of one of the biggest court festivals. On this day, the Russian empress signed the statute of the Order of St. George. On this occasion, the Divine Liturgy was served in the palace church, the signs of the order of St. George, the star of St. George and the ribbon were consecrated. Everything ended with an artillery salute, which heralded not only the appearance of a new order in the Russian Empire, but also that Catherine II had assumed its signs. The ceremony at the Winter Palace was attended by numerous courtiers, high dignitaries, generals and representatives of the diplomatic corps.

The badge of the Order of St. George was an equipotential cross, with expanding ends, the cross was covered with white enamel. On the obverse in the central medallion was the image of the holy Great Martyr George on a white horse, on the reverse side of the award was placed the monogram “SG”, which was decoded as “Saint George”. In addition to the sign of the order in the form of a cross, it consisted of a star and a ribbon. The badges of the order were worn on a ribbon of flowers of the Russian state emblem (black eagle located on a gold background) - 3 black and 2 yellow (orange) stripes, which later became known as St. George ribbon. 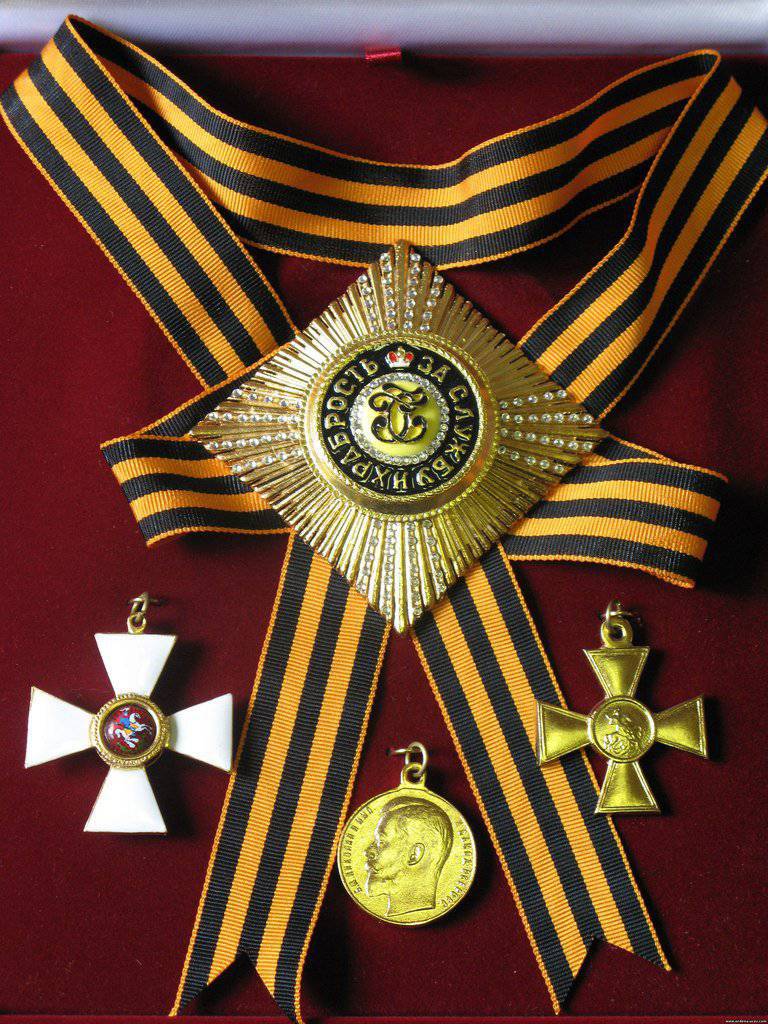 It is worth noting that the Order of St. George in the expanded sense was a complex of differences between officers, lower ranks and individual military units. It also included: Golden Georgievskoe weapon, the medal "For Bravery" and the insignia of the Cross of St. George, as well as the collective awards: St. George pipes, St. George banners and standards.

The Order of St. George had a degree 4.

The 1 degree of the Order is a white enamel cross with flared ends and a gold border around the edges. In the middle of the award, on the central medallion, in a red enamel field, the image of St. George on a horse, which spears a snake. On the back of the medallion there was a monogram of the saint: SG. The cross was worn on the tape over the shoulder at the thigh.

The 2 degree of the order provided for a cross of the same size as the highest award. This cross was worn around the neck, on a special order ribbon with a width of 5, see. The star of the order completely repeated that for the 1 degree.

The 3 degree of the order provided for a cross of a smaller size than that of the higher degrees of the award. This cross was worn around the neck on a special ribbon with a width of 3,2, see. Stars of the order were not provided for this degree.

The 4 degree of the order provided for the issuance of a cross of 34x34 mm in size, which was worn in the buttonhole of the uniform on an 2,2 ribbon; see Order stars for this degree was not envisaged.

From 1816 to 1855, on the cross of the Order of St. George of the 4th degree, which was awarded to officers (on navy for 18 navigation campaigns, in the army - for 25 years of service) the inscription: "18 campaigns" or "25 years" was placed. From 1833 to 1855, another inscription was also added to them: "20 campaigns." Such awards were provided for sailors who did not take part in battles. Beginning in 1856, in the Russian Empire, the Order of St. Vladimir of the 4th degree began to be used to reward officers for seniority. After that, the Order of St. George began to be awarded only for the differences shown on the battlefield. Also, since 1856, the awarded were allowed to preserve and at the same time wear signs of all degrees of the Order of St. George. Prior to this, they were forced to pass the badges of the lower degrees when they were awarded the same order of a higher degree.

The Order of the holiday was celebrated on November 26, on the day of St. George the Victorious. Awarding this order assumed to receive an officer of the state pension. Initially, an annual pension in the amount of 1 rubles was provided for 700 degree, 2 rubles for 400, 3 rubles for 200, and 1 rubles for 100. Subsequently, the size of pensions was revised upwards. Awarded several degrees of the order were entitled to receive a pension only for the highest degree. After the death of a gentleman, his widow had the right to receive her husband’s pension for one more year.

For almost 150-year history This State Award, only Field Marshal M.I. Kutuzov, M. B. Barclay de Tolly, I. F. Paskevich and I. I. Dibich were awarded with the marks of all four degrees of the order. In addition to Empress Catherine II, he laid upon himself the signs of the Order of the 1 degree and the Russian Emperor Alexander II, he did this on the day of the 100 anniversary celebration of the Order of Saint George. Another Russian emperor Alexander I was a knight of the order of the 4 degree for the campaign 1805 of the year against Napoleon. Later, he refused the proposed signs of the highest degree. Starting from 1812, 4 degree of the Order of St. George was awarded 16 regimental priests, and even the order of 500 clerics became owners of pectoral crosses on the St. George ribbon from the Cabinet of His Imperial Majesty.

From 24 June 1917, the Order of St. George of the 4 degree could be awarded to soldiers and sailors who performed the duties of officers in combat. In this case, the ribbon was decorated with a special laurel branch. In Soviet Russia, this order, like all other old state awards, was abolished after the October Revolution 1917. However, during the Civil War in the 1918-1920 years on the Eastern front and in the Northern army of the whites there was the practice of awarding the Order (with the exception of the highest 1 and 2 degrees). In 2000, the Order of St. George was again restored in the award system of the Russian Federation.