Why Russia loses the modern stage of “Drang nach Osten”? (Part of 1) 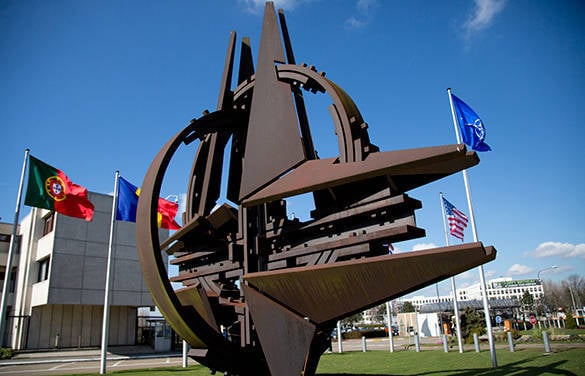 The events taking place in Ukraine have been in the spotlight for almost a year now and have been covered by the media from various points of view, with the exception of one - historical. And from this point of view, the Ukrainian tragedy is just the next stage in the centuries-old Western policy regarding the Slavic world, including Russia, called “Onslaught on the East”.

As a result of the implementation of this policy, some Slavic peoples, together with their faith, lost their history, language and national identity, as happened with the modern population of Germany or Austria. Others, retaining the Slavic language, turned into a blind and completely devoted instrument to their new master in the further struggle with the Slavic world, which happened to the Poles. All the rebellious peoples were completely exterminated, sharing the fate of the Prussians.

This genocide was stopped only by Russian troops in the 12-13 centuries in the Baltics, who fought shoulder to shoulder with local tribes against the Vatican Crusaders. And although the Horde invasion did not allow the Baltics to be defended at that time, "Drang nach Osten" was stopped on the banks of the Neva and on the ice of Lake Peipsi. And thanks to Russian support, the Baltic nations were able to preserve their native languages ​​and national identity. (Which, unfortunately, is not valued by their “educated” layers at the present time.)

In the future, the Russian people had to stop this onslaught repeatedly: in the Time of Troubles, in the 1812 year, and in the 1856.

The penultimate campaign of the West organized by him under the auspices of Nazi Germany ended in complete failure. However, the latter, under the banner of democracy, carried out by the hands of the cultivated fifth column, was a success. The Russian world was split into many separate parts. Including a separate state association called "Ukraine". The vector of its further development, the Russian or Western civilization, radically changes the distribution of forces between these antagonistic civilizations throughout Eastern Europe.

Why are Russian and Western civilizations, being called formally Christian, nonetheless antagonistic?

The fact is that no matter how the religion is called, the main thing is what god it actually serves. By and large, all religions can be divided into two camps. Some worship God the Creator, the Creator and Almighty of this world, goodness, light, truth and life.

Other religions serve his opponent — the degraded spirit of EVIL, DARKNESS, LIES, AND DEATH. THE ORGANIC SIGNIFICATION OF SUCH CULTIS IS A MANDATORY BLOODY SURVIVAL OF PEOPLE OR AT LEAST ANIMALS.

Based on the commandments of Jesus Christ, there is an opportunity to evaluate how this or that Church actually corresponds to its name.

Considering the essence of Western civilization (ZP) and following the Gospel covenant “You will recognize them by their deeds”, separating the deeds from the words, we will see that in essence it was not Christian from the very beginning. The litmus paper on the incompatibility with the name "Christian" was not only the fact of unceasing mass human killings both during the violent Christianization and in the subsequent purposeful activity of the Catholic inquisition, but also the fact of organizing the SALE OF THE CHAPTER OF THE CATHOLIC CHURCH OF INDULGENCES - official documents for exemption for money from the cost of sins.

Thus, THESE SPECIFIC ACTION THE CATHOLIC CHURCH HAS PUT A GOLDEN CALCUM ABOVE JESUS ​​CHRIST, RECOGNIZING THE MATERIAL WEALTH OF ABOVE SPIRITUAL PERFECTION (CLEANING).

That is, it turns out that in the name of Jesus Christ the Vatican only covered his god, about whom in the Gospel of John Christ said: “Your father is the devil; and you want to do the desires of your father. He was a murderer from the beginning and did not stand in the truth, for there is no truth in him. When he speaks a lie, he speaks of his own, for he is a liar and the father of lies. ”

The various versions of Protestantism, which later rebounded from Catholicism in the heart of the Orthodox Church, in general, went on to practice according to the norms not of the New, but of the Old, that is, pre-Christian testament, to which Christ’s followers spoke about their father and lie mankillers. It is noteworthy that in the US there is an openly Satanist church.

It is not surprising, therefore, that the WZ throughout its history consistently and extremely mercilessly acted solely in the interests of "the father of lies and murderers", organizing everywhere, where she could reach, massive bloody human sacrifices through wars, colonial seizures, bonfires and torture halls of the Inquisition, concentration camps, use biological, chemical and nuclear weapons of mass destruction, economic crises, etc.

Therefore, with all certainty it can be argued that WESTERN CIVILIZATION IS NOT ONLY NOT ON ITS CHRISTIAN NATURE, BUT IS A DIRECTLY OPPOSITE - ANTI-CHRISTIAN CIVILIZATION. Civilization of Evil, Darkness, Lies and Death.

Russian civilization (RC) is also called Christian. But the Russian people could find and accept the rational grain of the teachings of Christ. And most likely - he lived on these principles initially. That is why Christianity received its most complete development precisely in Russia. And prominent people who maintain objectivity, including representatives of the LC, testify to this in their statements:

“Russian people work conscientiously and gratuitously if there is a moral idea in society, a righteous goal.” (Friedrich Hegel, German philosopher.)

The German researcher B. Shubart in his work “Europe and the Soul of the East” writes quite directly: “... Russian possesses Christian virtues as permanent national properties. Russians were Christians before they were converted to Christianity. ”

From this it turns out that Jesus Christ preached to the ancient Jews the commandments according to which the Russian people lived from time immemorial.

“Russian Orthodoxy, contrary to current opinion, is the organic, natural, and logical continuation of the many thousands of years of“ paganism ”of the Rus. All its roots, images, symbols, the idea itself and the philosophical meaning - exclusively and initially in the oldest traditional beliefs of the Rus ... all ancient Orthodox churches of Russia are built on the foundations of "pagan" sanctuaries - and this is not a denial of those, but a sign of continuity. " (Petukhov Yu. D.).

If we trace the history of the RC, we will see that for millennia, even from pre-state entities, Russia was attacked from all sides for the purpose of enslavement. Including from ZTs. That is why in modern English “slave” sounds like “slave”.

At the same time, the Russians themselves never went on marches to their neighbors in order to capture slaves. Whatever peoples the Russian people faced, even having crushed them in the historical confrontation (Kazan Khanate or Poland), he did not turn the defeated into slaves, but on equal terms included them in his state.

That is, MENTALITY OF THE RUSSIAN HUMAN BEING IS CARDINALLY DIFFERENT FROM THE MENTALITY OF PRACTICALLY ALL OTHER PEOPLE. A Russian considers a person of a different nationality or religion to be the same person as himself, whom it is not worthwhile to turn into a “speaking instrument”, as the Europeans have constantly been doing since antiquity. This is not godly.

Thus, comprehending all of the above and making the necessary discount on human imperfection, one can rightly say that RUSSIAN CIVILIZATION LIVES AND DEVELOPS IN THE VECTOR OF GOD-CREATOR, the vector of LIGHT, GOOD, TRUTH AND LIFE. A distinctive feature of the Russian civilization - she never developed the work of slaves.

It is not surprising that systematically distributed in the Ukrainian media, which are in the hands of pro-Western forces, rather harsh reproaches to citizens that they, living for 20 years in independent Ukraine, did not become Ukrainians, are directed specifically and exclusively to the Russians. And absolutely not imposed on the Hungarians or the Poles. The reaction of a free Western society in this case is absolutely predictable - the West will not tolerate any hint of violence against the representatives of these peoples. But to the Russians it’s considered quite acceptable and, as far as possible, a hypocritical West is welcome. Such a national policy of the current ruling junta testifies that the war in Ukraine is of a civilizational nature.

And this war is covered by the Western and Ukrainian media precisely from the positions of the ZP and through its main weapons - Lies.

So, it is clear to any sensible person that the events in Ukraine are the result of the US aggression against this country, carried out not only by using their own army, but by means of pre-prepared traitors from the local population. The Western media is shamelessly lying to the whole world, fearing its Russian aggression.

The howl raised by these means that Putin replays the West in Ukraine is also a continuation of the lie. For, if you calmly look at the situation, it is clear that the return of the Crimea is only a private success that does not change the situation of the general strategic offensive of the West. Since instead of sea-based munitions planned for deployment in the Crimea, the West has the opportunity to place similar means, but land-based and (or) air-based, somewhere near Chernigov or Poltava.

And this false howl is intended to provide informational cover for the generally successful Western aggression in Ukraine.

Therefore, we need to firmly understand that modern war is fought mainly in the information field. And the one who wins there, he wins the war as a whole.

And, unfortunately, while success is clearly on the side of the West, which is clearly seen from the degree of zombies that exists in Ukrainian society, its focus on the harsh military reprisals against the recalcitrant population of the south-east of the country.