Who "invited" to Ukraine the "battalion named after Johar Dudayev"?

October 15 2014
30
The action of the so-called Minsk agreements gives reason to pay attention to how the representatives of the punitive battalions, who were forced to leave the territory of the so-called "ATO", are "pacified". Special attention is paid to the battalion of mercenaries, which bears the memorable name “Peacekeeping Battalion named after Dzhokhar Dudayev” (we’ll call it road safety. For peacekeeping service, of course, but the term “peacekeeping”, excuse me, I will allow myself not a bunch of bandits use). In principle, by one name it is already quite clear by whom this battalion is being filled, and what goals it pursues. However, to consider the activities of these "soldiers" is still worth more.

BDD-shniki in the Donbass during the hostilities against the militias of New Russia. One of the places where Caucasian gangsters fought was the 35-thousandth town of Dzerzhinsk in the DPR. Here the battalion was led by such a "gentleman" as Isa Munaev, whose personality may also be of interest to readers.

Isa Munaev is one of the so-called “brigadier generals” of the so-called “Ichkeria”, who, together with his accomplices, got so hard in the teeth from the Russian troops during the 2 of the Chechen campaign that he was forced to carry off his legs from the North Caucasus. Munaev decided to settle down in Denmark, then for several years he changed places of residence, having driven across Northern Europe. Munaev’s movements, like his “past achievements”, did not go unnoticed by the European special services. Munaevu made an offer to one of the European intelligence services, from which the fighter escaped from Russia could not refuse.

Munaev once told Azerbaijani journalists about his views on Russia. I will allow myself to quote the action movie recruited by European intelligence services literally:

The new Russian military aggression launched in September, 1999, in its cruelty on the part of the Russian troops, far surpassed the Russian-Chechen war (1994-96). As a result, hundreds of thousands of Chechens (hundreds of thousands! - Munaev was clearly at odds with the numbers - author's note) were forced to travel to Georgia, Azerbaijan, Europe, the USA and Canada.

If the Azerbaijanis and Georgians, because of their numerous refugees, did not have enough funds to provide full-fledged assistance to the Chechens, then the Western countries, the USA and Canada, had everything necessary for them. The granting of a residence permit, free study, social benefits and much more allowed Chechen youth to enter the prestigious universities of European countries.

Despite the cruel pressure on relatives by the Russian puppet Kadyrov, groups of Chechens in many countries of the world continue to support the idea of ​​independence of the Chechen state (and the Tsarnaev brothers also supported? - author's note), arranging annual conferences, demonstrations, rallies condemning Russian colonial politics in Chechnya and the Caucasus.

At the forefront of the Chechen struggle for their freedom and independence is the Free Caucasus public-political movement, formed by Denmark's 2009, uniting the Georgian, Chechen, Azerbaijani and other Caucasian diasporas.

Here, Munaev forgets to tell about how he receives funds from Danish taxpayers for the activities of the said Free Caucasus.

Then the fighter tells about the beginning of his journey in Ukraine:
Considering that the struggle of the Ukrainian people against imperial Russia is part of our overall struggle for the decolonization of the Caucasus, we decided to express our support by creating the Peacemaking Volunteer Battalion named after the hero of the Caucasus Dzhokhar Dudayev in order to help the Ukrainian people in defending their state.
We are convinced that the liberation of the Caucasus depends on the freedom of the republics of the former USSR, since their freedom is also ours. That is why it was decided to organize this battalion.

Munaev:
At the first official appeal from Ukraine, our battalion is ready to immediately go there to fulfill its international duty in order to protect freedom and democracy in the world.

Considering the fact that the Munaevts in Ukraine did turn out to be, it turns out that the “official appeal” was received. I wonder who is this “official” comrade who made the corresponding proposal to Munaev?

After several weeks spent by militants of a battalion made by European intelligence agencies from terrorists who had fled from the Caucasus to Scandinavia and Britain, in Ukraine, it turned out that Europe was going to shift the burden of financing Munaev and his children to the Ukrainian shoulders. Apparently, the problems with financing the BDD (or, if even shorter and more correctly - the BD) appeared after the army of New Russia began, as they say, to give heat to the enemy. The Europeans did not want to spend money on the "production" of corpses from the database, and therefore Munaev decided to try his luck in Dnipropetrovsk region - closer to the oligarch Kolomoisky.

According to the latest data, the database is located in Cherkasskoye (Dnepropetrovsk region), where, using the former guard polygons tank division is preparing for the next campaign in the Donbass. If it was Kolomoisky who sheltered the Munaevites, then it turns out that it was Kolomoisky who could have become that “official person” who, on behalf of the Ukrainian authorities, sent an invitation to Caucasian terrorists recruited by Western intelligence agencies.

Recently, Munaev gave an interview to UNIAN, in which he no longer speaks of an “official invitation”, but states this:

I threw everything, they all (points to other militants) came here to defend Ukraine from the enemy - Kremlin Russia. Many called me and said, "Isa, we must go, help." Because both Chechens and Ukrainians have never been and will not be under the king ...

Here, in Ukraine, Russia acts the same way as in Chechnya — an information blockade, provocations, and hard stripping. Ukrainians did not fight (what about Sashko Bilyi and other ukrootmorozki in Chechnya, who cut the throat of Russian conscripts - did Munaev forget? ..), and we know what evil this is - Putin's Russia. Therefore we want to help you, teach.

But this is already a sensible proposal from Munaev: based on the actual Munaev's experience in escaping from the Russian army, teach Ukraine how to sweep away all the radical terrorist plague along with yourself and the Yarosh grinders, and, of course, with the Filatov-Kolomoisky, so the country breathed deeply. Teach where to flee all this evil, fearing for their worthless lives, to hide from retribution for the death of civilians. Such a science may soon be useful to all of them ...

Photos from the “Dudayev peacemaker” Munaev: 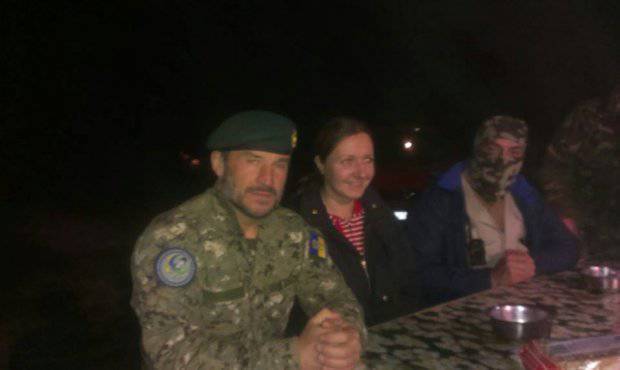 But it quickly bends under the one who pays, clinging the necessary flag to camouflage ... And why are you then criticizing Kadyrov? ..

And this is from the “glorious past” of Munaev: 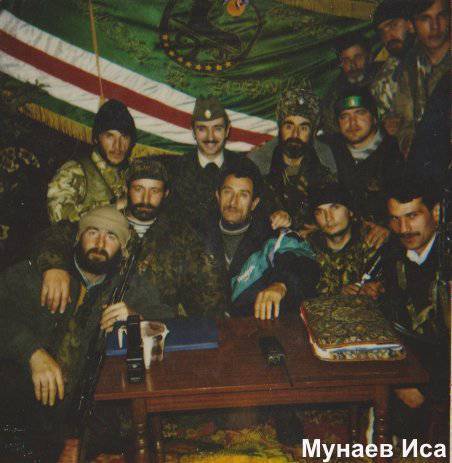 Isa, many of your comrades, captured in this photo, just waited for you ...