Kim Jong-un is alive, but walks with a cane

October 15 2014
26
The leader of the North Korean labor people, Kim Jong-un, did not appear in public for more than a month. Analysts have decided: either Comrade Kim is seriously ill and is about to die, or there was a military coup in the DPRK due to a severe economic crisis, and the main conductor of the Juche idea was shot dead. A strange version was also used: allegedly Kim Jong-un disappeared to attract the attention of the world community to his country. All this speculation. October 14 North Korea leader showed up at an elite hospital in Pyongyang. 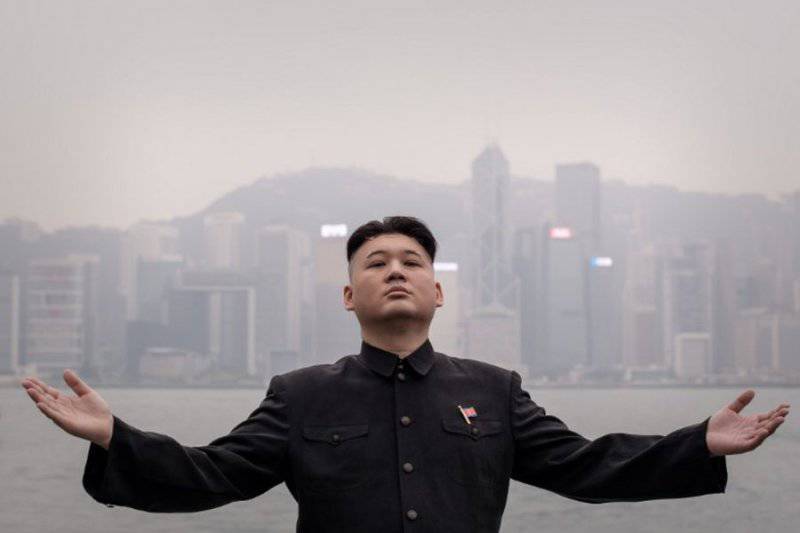 Recall that the young leader of the North Korean people disappeared from the public view of 3 September. The latest news reports about his appearance in public noted that he was present at the concert of the rock band "Moranbong Band", where, as usual, he smoked cigarettes and made a speech. Observant people noticed, however, that the leader was limping. Other observant people reviewed the summer videos with the same character and came to the conclusion: he has been lame since summer. Still others announced that Kim was terribly fat, looked terrible and suspected that he had diabetes.

October 13 "BBC" a long article was published by John Swenson-Wright, head of the Asian program at Chatham House. The scientist noted that the DPRK leader did not appear in public during 38 days, which caused a whole wave of assumptions about the political stability of the North Korean regime.

Kim Jong-un did not appear at the most important official events: 1) Day of the Proclamation of the DPRK (September 9); 2) celebration for the founding of the Korean Labor Party (October 10).

Due to the fact that the official information agencies of the DPRK reported on the leader’s poor state of health, foreign experts attributed to Kim Jong Un a whole range of diseases: from diabetes, gout, ankle injuries and to problems with the endocrine system and internal organs.

Other analysts developed ideas about a coup in the DPRK: Kim Jong-un is under house arrest, where he was planted by elderly representatives of the party and military elite, dissatisfied with the constant purges and executions, and the inability of the too young leader to lead the country out of a protracted economic crisis. Do not like his opponents and the isolation of the DPRK in the international arena and the sanctions that deprive the top of access to imported luxury goods and the ability to skate abroad.

At the same time, “the strongest argument” in favor of the fact that such a coup is unlikely, the expert calls “the fact of the absence of a successor to Kim Jong-un.” The domination of the Kimov dynasty is such that there are no candidates for the post of a new leader in the country. Two brothers Kim Jong-un? But one of them has been expelled abroad, and the other has a feminine character and uses amphetamines. Maybe the younger sister is Kim Yo Jung? This expert also considers it “extremely unlikely”, since a woman can hardly claim to be a leader in a state where men dominate in society.

The version about the coming to power of the young sister of the leader has spread, add to this, in the Western press one of the first.

Western analysts have issued a hypothesis about the transfer of power in the DPRK to the Directorate for the organization and development of the Labor Party of Korea. This powerful structure is headed by the chief of the GPU of the North Korean army, Hwang Ben So. Kim's younger sister, 26-year-old Kim Yo Jeong, allegedly shares power with him. This version seemed pretty convincing to many: after all, the "girl" was not alone at the helm.

Victor Beatty ("Voice of America") cites an opinion voiced by 12 in October on the program “Meet the Press” on NBC television by US National Security Advisor Susan Rice. She was asked: does she believe that Kim Jong-un is still the leader of North Korea?

“Of course, we are closely following everything that is happening in North Korea,” said S. Rice. - This is a country for which we are very closely watching. At the moment we have not revealed in the DPRK any signs of transfer of power that could be considered unconditional. However, we continue to closely monitor the situation. "

Previously said nothing special, and the State Department spokeswoman Jen Psaki. According to her, the “secretive” North Korean regime provides little information.

Voice of America also cites the opinion of the Vice-President of the Korean Society, Stephen Norper. “Earlier,” said Mr. Norper, “Kim Jong-un has twice disappeared from public view twice. His father (Kim Jong Il) and grandfather (Kim Il Sung), who also ceased to appear in the press and media for a long time, did the same thing. In part, this is an attempt to make everyone guess: what is happening? ”The expert admits that something could happen to Kim Jong-un, although analysts find it difficult to say what it is.

12 October Nezavisimaya Gazeta An article by Vladimir Skosyrev "Kim Jong-un asked a mystery to the Americans."

The analyst recalls that the North and the South of Korea "shot on Saturday in the direction of each other across the demarcation line." No one was hurt, but this incident gave rise to a new wave of speculation about the DPRK leader, who has disappeared from the eyes of the international community.

The launch of balloons with leaflets for northerners through the demilitarized zone from South Korea turned out to be a reason for mutual firing, the observer reminds. Propaganda materials are produced by activists of anti-communist groups. The North Korean soldiers tried to knock down the "presents", and then a "short skirmish" ensued.

The columnist brings the point of view of the American agency “Bloomberg”. It reported that for the first time after coming to power, Kim Jong-un did not visit the mausoleum on a memorable day, and a few hours later shots were fired.

Everything was clarified on October 14.

DPRK leader Kim Jong-un for the first time in forty days appeared in public, broadcast on the day TsTAK.

The North Korean leader inspected the construction of the area for scientists "Sputnik" and "gave the necessary instructions", the source quotes "Lenta.ru". It is noted that the residential area consists of 24 multi-storey buildings, schools, hospitals, kindergartens and buildings for social and cultural purposes. According to Kim Jong-un, the area looks "very attractive, it presents a fantastic picture."

Then the leader “visited the newly built Institute of Natural Energy Sources of the State Academy of Sciences”. The leader noted the work of builders who did everything qualitatively, as the party demanded. “Our scientists, who devote their whole lives to building a rich and powerful country, are under the care of the Labor Party. We must take care of scientists, ”said Comrade Kim.

Where did the leader of the working people disappear?

RBC with reference to Reuters, indicates that the North Korean edition of Rodong Sinmun has published photographs of Kim Jong-un visiting the constructed facilities. In the photographs, the DPRK head is captured with a black cane.

Earlier, the same Reuters agency, referring to an anonymous source close to the leadership of the DPRK, wrote that the leader’s disappearance was due to an injury to the ankle and knee: he had injured them during military exercises. Kim Jong Un takes about a hundred days to recover. The weight of the injury was overweight, an unnamed source added.

Finally, the French edition reported who had treated the leader of North Korea. Frenchman, of course.

The fate of Kim Jong-un is in the hands of a French doctor. This was reported by the publication "Le Point", citing the South Korean newspaper "Joongang Ilbo". Sources in the security services of South Korea reported that the reason for the disappearance of the DPRK leader was an operation performed by a surgeon from France, writes "Moscow Komsomol".

"Last month, the North Korean leader underwent surgery on both ankles at the Bongwa clinic in Pyongyang," say sources.

The named clinic is an analogue of the Soviet Central Clinical Hospital, indicates "MK". There are treated the highest state officials. Now Kim Jong-un is under rehabilitation under the supervision of a foreign doctor.

"MK" also notes that a source in the security services of South Korea dismissed the version of the coup in Pyongyang. But he said that the political consequences of Kim Jong-un's injuries are not excluded. Who knows whether the sole management of the state of Kim Jong-un will not be further restricted. No, it's not about overthrowing, but about the “more collegial management” of the country.