In Latvia, they staged a musical glorifying SS officer Tsukuse, famous for his cruelty

October 13 2014
22
A protest action was held in Latvia on the eve of the premiere of the musical about the famous SS punisher Herbert Tsukurse, who is considered one of the active participants in the destruction of 26-thousand of Jews. The action was organized by members of the partnership "Russian Dawn". This is reported by the channel Star. 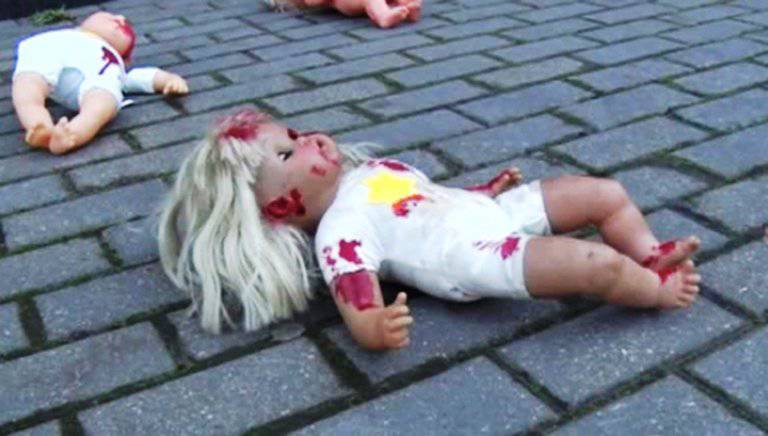 On October 11, before the performance in Liepāja, the protesters prepared a real show: before entering the concert hall, they laid out the bloody children's dolls with yellow stars of David sewn on their clothes, which symbolized the victims of the SS man.

“This is an attempt to attract the attention of people and the public to the fact that today in Latvia there is a revival of Nazism, anti-Semitism, Russophobia. This is expressed not only in political moments, but also within the framework of art, ”said the organizer of the action, Yevgeny Osipov.

In a partnership statement that the web portal quoted DELFIIt says:
“The leaders of the event didn’t like such a meeting of the premiere, they tried their best to get rid of the unpleasant picture. For about forty minutes, about two dozen policemen tried to convince us of the need to move the dolls to another place, but the dolls remained where they were appropriate.

Osipov later noted on Facebook: “The visitors of the event were not without embarrassment bypassing the dolls, but one obvious lover of Cukurs“ heroically ”walked over them, kicking with one foot with the absurd cry of“ Russian fascists ”. It is encouraging that, according to our data, no more than a hundred were bought for the premiere in the 1,500th hall of the Liepāja Olympic Center, that is, the premiere was a failure.

According to the portal “DELFI”, Herbert Cukurs is a famous Latvian pilot who “in 1941 voluntarily joined the“ Arajs team ”- the police unit of the SD, which was directly involved in the extermination of the Jews. After the war, Cukurs fled to Germany and then to Brazil. In 1965, in Uruguay, he was eliminated by Israeli intelligence agents. ”

“Theatrical production was condemned by Jewish organizations and the Ministry of Foreign Affairs of Latvia, considering the play to be a provocation of interethnic hostility. However, the authors of the musical still insisted on the premiere, considering this cultural phenomenon as an ordinary statement of facts, ”the website of the Zvezda channel notes.

In the opinion of the producer of the musical Juris Millers, “one cannot say that the aviator Herbert Cukurs was a Nazi criminal, since legally his guilt has not yet been proven.”

“My goal, as a producer, is to ensure that all interested countries - Latvia, Israel, Russia, and Germany - agree that it is necessary to legally put an end to the fate of Herbert Tsukurs. For some, he is a convicted participant in the Holocaust. For others, it is a Jewish lifeguard who, during the Holocaust, hid at least four Jews, risking his life. These are questions that the court must answer. ”, - he said.

Meanwhile, several citizens of Latvia addressed an open letter to the world community, the leadership of European countries and the United States, calling for "stopping the apologetics of a member of the" Arajs team ", an accomplice of the Holocaust, Herbert Cukurs." “This unit was voluntary and its main purpose was the torture and extermination of Jews and opponents of the Nazi government. The Arajs team organized the escort of the inhabitants of the Riga ghetto to the site of the massacres in Rumbula. Already during the convoy, approximately 1000 people were killed, and approximately 26 thousand people were killed in Rumbula as a whole. Such conclusions are made by scientists of the Latvian Commission of Historians "- agency quotes the letter REGNUM.

Poetess Andra Manfelde also appears against the musical about the fascist punisher, whose songs are included in the production. In March, she refused to cooperate with the show-producer and asked him to abandon this work. However, Juris Millers did not abandon his project.

On this occasion, the poetess said:
“Today, when the words“ fascism ”and“ Nazism ”are no longer just rhetoric, when thousands of people are killed a few hundred kilometers from Latvia, when people ply on Latvian roads TanksPutting a musical performance on stage, the main character of which was connected with a team of killers, is not only tasteless and dangerous, it means contributing to Evil. The glorification of a member of the Arajs team will provoke a negative reaction from the world community and a negative attitude towards Latvia as a whole.