Project "ZZ". Putin and 200 of millions of men - the hope of the planet

October 13 2014
150
American experts largely disagreed. Some argue that Putin does not care about the Russian people, but it only concerns "his" people, and that Putin is ordinary authoritarian mediocrity blaming the West for all troubles. Their opponents ardently object: Putin will flourish with Russia, but the White House is committed to trying to destroy the world. 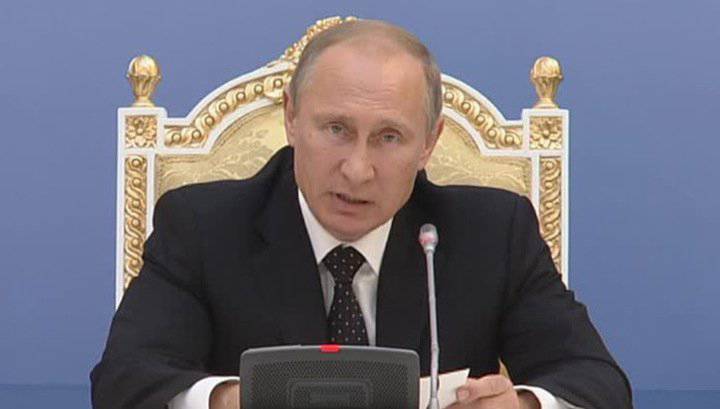 Joe Nocera in "New York Times" I tried to understand whether the sanctions imposed by the United States and Europe because of Russia's annexation of the Crimea are working against “Putin's Russia”. The analyst answered: yes, they work, but not at all in the way many people think.

Putin returned to power in May 2012, the author writes, and already at that time the Russian economy was in decline. In recent months, this decline has only accelerated: the scale of economic growth has become “flat”. The ruble "is in a free fall." Inflation in the country is growing. More than 100 billion dollar capital is expected to leave Russia in 2014 year. Finally, the price of oil - “the main asset of Russia, with the help of which the government finances itself”, - has gone down.

At the same time, one cannot say whether these problems are directly related to sanctions. After all, the fall in oil prices is also connected with the boom in the American oil and gas industry, the author notes. The direct impact of sanctions is likely to begin to be felt in the near future, when Russian companies will have to refinance their debts, and Western capital markets will be “locked” for them.

However, the sanctions did something: from now on, Putin himself and his “closest associates” are in plain sight, Nocera notes. "The rule of law in Russia has long been a fiction." For example, after the introduction of sanctions, a blow was struck at McDonald’s restaurants: they had never had any problems in Russia before, now suddenly became guilty and closed up. And other Western companies have acquired similar problems, the analyst notes. Here he also relates the case of Vladimir Yevtushenkov, whose shares of Bashneft were “seized by the government”. Yevtushenkov is not like Khodorkovsky: he "was not a threat to Putin." However, many believe that the assets of Bashneft will eventually “find their way” to Sechin, and then “become part of Rosneft,” the author writes.

“Rule No. 1 for Putin is to demonstrate that his people will be protected, and he directly makes it clear,” said Karen Dawisha, an expert on Russia from the University of Miami in Ohio and the author of the published Kleptocracy Putin. . Davisha says that “they” have already “climbed into pension funds” and started “two-digit cuts in the health budget.” According to the expert, Putin’s people "will always receive priority over the people."

What happens? The analyst is confident that Putin is acting incorrectly. Obama and his colleagues in Europe "sanctioned" companies and individuals from Putin’s entourage. But Putin’s reaction now deters not only foreign investors, but also Russian entrepreneurs. But, as it seems to the author, he (Putin) doesn’t care.

The Russian parliament has initiated a law that will allow the government to “seize assets owned by foreign companies and use them to compensate for damage to oligarchs and those who are financially affected by sanctions” (referring to the “Rotenberg law”). Nocera believes that this is “such a stupid and counterproductive measure that even some people inside the government protested against it. However, it will almost certainly pass. ” And in the end, according to the analyst, Russia "in spite of all" will harm itself.

“Mediocrity does not know anything higher than itself,” wrote Sir Arthur Conan-Doyle. This is “an accurate description of Russian President Vladimir Putin,” the journalist said.

Russia, headed by Putin, has now taken an anti-Western course. Putin blames the West for his country's problems. He justifies his authoritarian methods by the need to protect Russia from the declared external enemies, the journalist writes.

Putin, who blames the West for all sins, is convinced that active protests in Russia and other authoritarian states cannot happen on their own. Exceptionally "with outside help" rebels from the people can rise "against the autocrat."

Putin is “mediocrity,” which “cannot go beyond its authoritarian worldview,” continues Borschevskaya. He "cannot imagine" that the people ", of their own free will, would choose organized protest and demand responsible government."

The Orange Revolution in Ukraine in 2004, the “Arab Spring”, then the Association Agreement of Kiev with the European Union — everything is arranged by the West. The Orange Revolutions in Ukraine inspired, according to Putin, the US State Department, and the Association Agreement between Kiev and the EU was the fruit of the EU conspiracy. So writes a journalist. Well, and most recently, she recalls, the Russian state-owned media filed democratic protests in Hong Kong as the embodiment of the Western scenario.

According to Borschevskaya, "Russia has a long tradition of blaming the West for its problems." And this “did not start Putin or even the Soviet Union. Even in tsarist times, it was common in Russia ... ”Even when“ Western countries, often in union with Russia ”contributed to“ the development of Russia, ”during times of“ political troubles ”it was customary to point to the West as an enemy.

Yes, in such a context, Putin’s anti-Western propaganda “resonates” with the mood of the Russian population, the author writes, immediately expressing doubt that such sentiments can be sustained in a “long-term perspective,” especially if we consider that the Russian economy continues to fall.

It was the same in the Soviet era: no lie about the "foreign conspiracies" could not hide the "numerous failures of the Soviet system," writes Borschevskaya. And in the end, "the people of Russia realized that the Soviet system was to blame, and not at all foreigners."

“Putin will not be forever,” the journalist sums up, although “this is now a poor consolation.”

It is all the more difficult to console oneself, because the opposite point of view is gaining momentum in the United States. No, it concerns not the fact that Putin will still be eternal, but that Russia is destined to flourish. And with all the same Putin.

Jeremy Jacques writes about this in a journal. "The Trumpet".

In Western countries and their satellites, it is increasingly often stated that “the reign of Russian President Vladimir Putin is coming to an end,” that “Putinism is losing,” reminds the analyst.

However, even despite Western sanctions, Putin, most likely, will not only “keep the chair”, but even “politically strengthened in the long term.” The author gives three proofs.

Putin is likely to “survive”, since the majority of Russians (and this number is growing) “love and fully support him.” Putin is called the "hope of the nation." As for sanctions and possible shortages, the "propaganda machine ... convinces Russians, drawing a parallel between new difficulties and the heroic struggle during World War II." As a result, the majority of Russians regard their sufferings as a noble sacrifice, the author writes. According to the August poll by the Levada Center, Putin’s approval rating is 87 percent. At the same time, 66% of Russians are confident that the country is going in the right direction. According to the analyst, Putin will not only “survive” the current “trade war”, but even any greater conflict. As for the Russian opposition, Putin unscrewed her arms.

Cooperation with Asian countries, especially with China and India, will help the Kremlin's master to overcome Western sanctions. These states reciprocate Russia. Both powers called strengthening ties with Moscow one of the main priorities of their foreign policy. And one more thing: while the European Union is trying in every way to reduce its dependence on Russian gas and oil, China, on the contrary, has seriously increased gas consumption by signing a contract for $ 2014 billion in May for 400. The journalist also recalls the creation of BRICS countries in the middle July Development Bank. Finally, in August, Russian and Chinese central banks agreed on currency exchange transactions for the project, which will allow them to reduce their dependence on the US dollar.

If tensions between Moscow and the West increase, then we will witness that Russia will be involved in the orbit of Asia and take the corresponding geopolitical position.

Here the author goes to the Bible.

Vladimir Putin, most likely, will “survive the current misfortunes,” since there is evidence of this from the “most reliable in the world” source in geopolitics - the Holy Scripture.

The Bible predicted the rise and fall of the Chaldean, Persian, and Greek-Macedonian empires, as well as the upheavals in the Roman Empire. All these kingdoms rose, and then collapsed - just as it was written in the Bible.

Vladimir Putin was also "predicted in the Bible," the author reports. Speech on the "stunning prophecy" of John: "The number of cavalry troops was two darkness; and I heard his number. " (Revelation, 9: 16). The army in 200.000.000 men is much more people than lived in the world at the time when the prophecy was written.

The Bible provides many important details about this largest army ever assembled on Earth. For example, in Revelation 16: 12 we are talking about the "kings of sunrise", that is, the "confederation of Asian countries," the author believes.

But who will lead the campaign? The answer is to that. He is given in the Book of Ezekiel, in chapter 38, in verses 1-2: “And the word of the LORD came unto me, Son of man! Turn thy face to Gog in the land of Magog, prince of Rosh, Meshech, and Tubal, and prophesy against him. " Rosh, writes a publicist, is the ancient name of Russia. Many encyclopedias recognize this.

In addition, The Trumpet editor-in-chief Gerald Flurry himself wrote about it in the September issue: “I firmly believe that Vladimir Putin is going to lead the army at 200000000 man ... I don’t see anyone on the horizon who can stand it!”

“The Trumpet” does not agree with those who think that Putin will not survive the current upheavals. Part of the prophecy has already come true. It is quite likely, the author sums up, that Putin will make "even more."

As for who is the enemy of the world, Paul Craig Roberts spoke on this subject. His article appeared on the site foreignpolicyjournal.com.

As the famous publicist writes, the “aggressive and senseless position” towards Russia and China, which was taken by the “Washington instigators of the war”, destroyed everything that was achieved during the Reagan and Gorbachev times.

If Reagan and Gorbachev ended the Cold War, thereby eliminating the threat of a “nuclear Armageddon”, then the current neo-conservatives in the United States raised the threat of a nuclear nightmare.

“The corrupt and duplicitous Clinton regime violated the agreement entered into by the George Bush administration with Moscow in 1990,” writes a publicist.

In exchange for the consent of Moscow for a united Germany to become a member of NATO, Washington agreed not to expand NATO to the east. In 1999, President Bill Clinton broke that promise. Poland, Hungary, Czech Republic entered NATO.

Finally, the “corrupt and hopeless” Obama regime has added Albania and Croatia to the list.

In other words, Roberts bitterly ironically, for the last 21 year, the US presidents made it clear to Russia that the word of the US government "is worth nothing." And today, Russia is surrounded by military bases of the United States and NATO.

If Ebola fever and global warming do not destroy humanity, the analyst writes, then Washington will do it.

So, one hope - the Holy Scriptures.