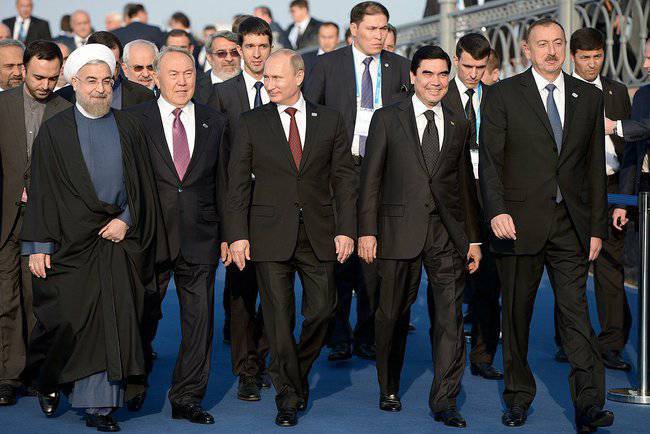 The most outstanding result of the recent summit of the presidents of the five Caspian states (Russia, Iran, Kazakhstan, Azerbaijan and Turkmenistan), among whom there are no women and who gathered in Astrakhan to determine the legal status of the largest lake in the world, was a joint political statement: No to foreign military presence in the region! A direct response to the United States and Israel, which have already settled in Azerbaijan, agreed on military cooperation with Kazakhstan and Turkmenistan and are trying to push through their Caspian Guard program, for which 135 millions of dollars have been allocated. This is undoubtedly a big victory for Vladimir Putin after such strikes as the Ukrainian events and Western sanctions against Russia. The improvement of Iranian-Russian relations, expressed in the compliments with which the heads of these states showered each other, in the resumption of direct flights from Moscow to Tehran and in the rejection of the dollar in bilateral trade, was the main highlight of the meeting. Yet the neighbors failed to agree on how to divide the lake and 48 billions of barrels of oil and 8,7 trillions of cubic meters of gas located on its bottom and coasts.

Quintet has decided to build a ring railway to connect the ports of the Caspian Sea, as well as to conduct joint emergency response exercises in 2016.

Sea or lake - there is a difference

The Caspian can be considered as the sea since Stalin ordered to connect it in 1948 to the Mediterranean through the Volga-Don canal, which made shipping links to the Sea of ​​Azov and the Black Sea possible. If so, then non-coastal countries - such as the United States - can claim to use its resources. However, in the old and only Soviet-Iranian treaty 1940, the Caspian Sea is called a lake, and equal and exclusive rights to operate in it of two Caspian states are defined. Despite the fact that it is the Russian Volga-Don Canal named after Lenin that makes the lake a sea, Russia does not allow foreign ships to pass through it (unlike, for example, Turkey, which owns the Bosphorus). Whether it’s a lake or a sea, three young states - Kazakhstan, Azerbaijan and Turkmenistan - claim the right to vote on the issue of elaborating the legal status of the reservoir, despite the fact that in 1991, they assumed the obligation to comply with the treaty signed by the USSR in 1940, according to which Iran has the right to claim the 50% of all that is in the Caspian. But since this, in addition to being unfair, is also impossible, Tehran offers to distribute everything to everyone on 20%, to which Russia and Azerbaijan disagree.

These are very large quantities of oil and gas. Russia rejected the Iranian offer to cede part of its rights to the post-Soviet states. And since it is precisely its geographic boundaries that have changed, it is against equal division of resources by 20% for each country. Moscow has teamed up with Kazakhstan and Azerbaijan to oppose Iran: they offer him to be content with 11%, in connection with which Tehran alternates "real politics" with cannon diplomacy: in 2001, the Iranians, without hesitation, sent two warships to expel Azerbaijani exploration vessels from the disputed waters. At the moment, the parties have agreed not to conduct mineral exploration in areas whose status is not determined.

As a result, Tehran generally preferred to freeze the development of its deposits due to lack of funds and not to quarrel with its neighbors, and began to explore the land in the north of the country, where, it seems, "black gold" is also abundant.

The Iranian authorities, despite their initial motto "neither East nor West", after the unexpected takeover of the American hostages at the US embassy in Tehran and its direst military, political, economic and diplomatic consequences, were forced to cooperate first with the USSR and then with Russia: As a member of the 5 + 1 group, which is negotiating on the Iranian nuclear program, Moscow supports US sanctions against its southern neighbor and, at the request of Israel, refuses to supply Iran with C-300 missile systems (for which Tag Eran filed a lawsuit against her in the International Court of Arbitration).

At the same time, Iran rejects Austria’s offer to buy gas for 20 billions of dollars in order not to break Russia's actual monopoly on gas supplies to Europe. He needs the support of Moscow, which would soften US pressure, although the Iranian side at the same time declares that it does not recognize Russia's bilateral treaties with other Caspian countries, because all decisions must be made by the whole five unanimously.

One thing is clear that the lack of oil production technologies from the seabed, as well as the unwillingness to quarrel with Caspian neighbors, and even against the background of the crisis in Syria and Iraq and the fact that Azerbaijan is a partner of NATO (the US controls the Azerbaijani oil fields, which is time Hitler was unable to achieve during Operation “Blau”) and Israel forced Iran to look for oil inside the country and leave the one in the lake until better times.

The members of the Caspian "quintet" are delighted: Moscow provides security in the region and does not ask for anything in return. It is the only country with naval forces in the Caspian waters, from where it affects events in Central Asia and the Middle East: it can block its transport routes to prevent the supply of Chechen separatists and control wells and oil pipelines in the region after the appearance of Western companies here. Moscow, like a century ago, today occupies a leading position in the region.

By including Azerbaijan and Georgia in its orbit, the United States is trying to create an Azerbaijani-Turkmen military bloc, in order to separate the northern part of the Caspian Sea (Russia, Kazakhstan) from the southern part (Iran). Washington is doing everything possible to expand its presence in this zone of Russian influence, which connects Central Asia, the Caucasus and the Middle East with Europe. Despite the failure of the trans-Afghan gas pipeline project, Americans do not stop - the temptation is too great: The US Department of Energy estimates oil reserves in the Caspian Sea at 17 billion barrels, gas at 6, 630 billion cubic meters, that is, “sufficient to meet US energy needs over the years 30 "and throw a little more to the Europeans. To this end, Washington needs to:

* Overcome the barriers set by Russia. The United States failed to either launch the Nabucco project or build a trans-Afghan gas pipeline from Turkmenistan, even occupying Afghanistan.

* Admit defeat in an attempt to unite Georgia, Ukraine, Azerbaijan and Moldova within the framework of GUAM (1997), a regional organization whose goal was to weaken the influence of Moscow.

* Increase the number of non-Russian oil pipelines in the region. The only one at the moment is the Baku-Tbilisi-Ceyhan pipeline, which provides only 1% of demand in the global oil market.

* Reduce the cost of transporting Caspian oil through pipelines, which today is 13 euros per ton, while delivery from the Persian Gulf costs only 3 euros, and from the North Sea - 7.

* Overcome political instability in the Caucasus.

* Put an end to the rivalry between Israel and Saudi Arabia for the use of Iranian territory, through which the Caspian Sea and the Persian Gulf could be connected via the shortest route: the existing infrastructure can be used cheaply, reliably, or the Iran-Turkey-Europe gas pipeline can be built. In fact, Russia is also interested in the existence of such a pipe that would cross Iran from north to south, but on the condition that the gas flowing through it will be Russian. One of the objectives of the current Iraqi-Syrian war unleashed by the United States, Saudi Arabia and Israel is to prevent the construction of the Iran-Iraq-Syria-Mediterranean gas pipeline. Iran is excluded from the US-conceived game as a major supplier of hydrocarbons, even if the relationship between Washington and Tehran normalizes.

* To build an offshore gas pipeline under the Caspian Sea from the Turkmen gas and oil field Galkynysh, the second largest in the world after the Iranian-Qatari South Pars. Then gas could be delivered to Europe through the territory of NATO partner countries: Azerbaijan, Georgia and Turkey. The sharp objections of Russia and Iran related to environmental risks put an end to the project.

The Putin alternative to this and another two dozen projects relating to supplies from Kazakhstan and Azerbaijan, on which 11 American and 24 European companies are working, is a pipeline from the Caspian Sea to the Black Sea to get from there to Baltic and Europe.

In this state of affairs, the West should maintain good relations with Russia, Iran and Turkey in order to get good access to the region.

Around the oil and gas-rich Caspian Sea, millions of people live in poverty. Meanwhile, more than 800 endangered fish species are found in the sea, including sturgeon. Sturgeon caviar is obtained in this way: they catch a female, which can reach quite impressive sizes, and beat her on the head to an unconscious state. Opened her belly and took out caviar, she was thrown into the sea, alive or dead, if it was not possible to sell the carcass. The German alternative to this barbaric method is also not too civilized: on fish farms, females of the sturgeon are under Caesarean section in order to get caviar. All 35 years of their lives, fish receive hormone injections so that the production of caviar in the body - to the needs of a handful of millionaires - does not stop.

The big game for the Caspian Sea does not provide for the welfare of people or the environment.