October 13 2014
136
At the meeting in Milan, Putin and Poroshenko will affect three interrelated conditions. Gas issue, the status of Donbass and the land corridor to the Crimea. The Kremlin needs a free supply route to the Crimea. And for this he is ready to sacrifice much. Perhaps even what you donate under no circumstances. Poroshenko also has a couple of strong cards - this is a completely regrouped and ready for attack army and gas transportation system with a magic “steal-gas” valve. Therefore, there will be bargaining.

Most likely, the basic position of Moscow will look like this: recognition of Crimea as Russian, plus an unhindered corridor to it. In exchange for this gas concessions, overlapping the help of the militia. The refusal of Kiev - and "Voentorg" again earn the whole coil, and the number of "vacationers" will increase significantly. And then the corridor will still take place, but on completely different conditions. 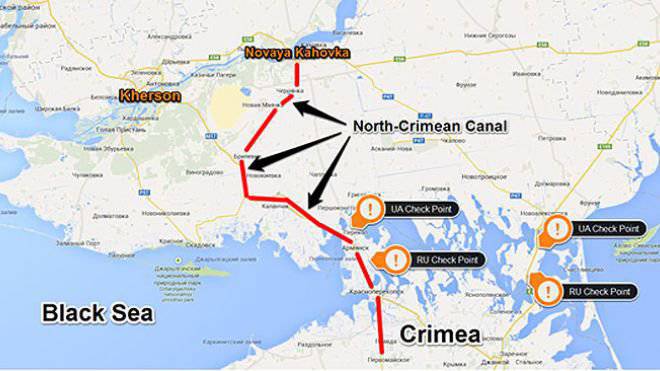 But if Poroshenko gives a sham consent, then Moscow risks falling into the trap of being fooled again. On the example of Sevastopol, gas scandals and all the events of the past year, we know what all the promises of Kiev are worth. More vile and treacherous government sits except in Washington. And if we open the tutorial storiesit will become clear that any treaties with the Nazis are not worth the paper on which they are written. They will be broken at the first opportunity.

Therefore, it would be naive to believe that Poroshenko, having in his hands the two strong trumps described above, would make significant concessions. The maximum that he agrees to is some kind of “temporary corridor” which will be the same profanation as both Poroshenkov's “truces”. Wagons and cars from continental Russia to the Crimea will be mercilessly arrested, robbed, and terrorized by all possible means. Here, as they say, do not go to the grandmother. There is no stable supply route in such conditions.

Another pitfall lies in the very status of the Crimea. Crimea is considered Kiev occupied territory. The provision in such conditions of any corridor for the “Russian aggressor” for Poroshenko is a completely unthinkable matter, not to mention the recognition of Crimea as Russian. The same opinion was also voiced by the Europeans and they directly, and the Americans, who need war, will not be able to agree.

I want to note the important legal slip of the Kremlin at the very accession of the Crimea. All right, that the legitimate authorities of the peninsula held a referendum, and then declared independence and became part of Russia. But Moscow did not use its trump card, namely, Yanukovich, who until May 24 remained the legitimate president and was completely in the hands of the Russian authorities. The sequence of actions was to be as follows: the legitimate authorities of the Crimea hold a referendum and proclaim independence - the legitimate president of Ukraine Viktor Yanukovych recognizes this independence by a special decree - the independent Crimea joins Russia. Maydanny invaders at that time were anyone from the point of view of the law, and the position of Russia in the eyes of third countries (not the West) would be much stronger. I do not believe in the incompetence of our diplomats, which means that we are talking about conscious betrayal. To whom thank you for this is a separate question. But Putin had to understand what kind of pig he was being laid on, and had to force Yanukovich to recognize the independence of Crimea. Alas, this was not done.

Of course, Yanukovych’s signature would convince only representatives of neutral countries. For the West, we will be bad in any case. At the same time, he himself in modern history did not disdain to recognize not only much more bloody and illegal declarations of independence (Kosovo), but also frank annexations with the genocide of the local population and the profanation of referendums (for example, forceful absorption of Western New Guinea Indonesia), followed by dragging everything this through the UN.

The current contradictions, in essence, do not have permits. They can be resolved only by the surrender of Kiev to Russia or Novorossia. Or vice versa, the complete surrender of Russia and Novorossia to the junta. But in the latter case, the Russian Maidan is becoming quite real.
The bridge to the Crimea will become a reality in 2018, if there are no traditional delays for our country. But until this happy time you have to live another four years. Yes, even he will not solve all the problems. For example, the North-Crimean channel blocked in Kherson will remain sealed. Geography itself tells the Kremlin and its owner what to do.

As I said back in March, the only iron guarantee of the land corridor will be Russian troops in the Donetsk (Republic), as well as Zaporizhzhya and Kherson regions. And even better - in Kiev. For the present knot is cut only by the sword.