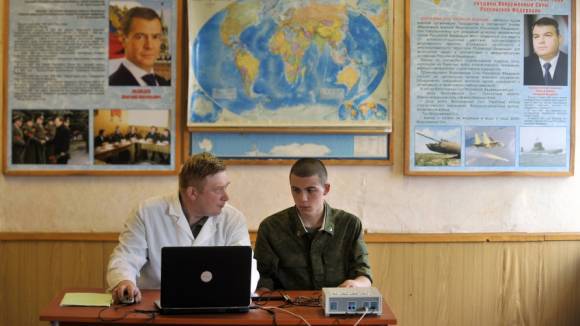 The Strategic Missile Forces have introduced a mandatory “lie detector” test for all senior officials responsible for the “nuclear button”. According to Izvestia, the 25 officers of the high command level of the Strategic Missile Forces have already passed the test. As a result of testing, all of them are allowed to manage strategic nuclear weapons.

Polygraph testing “Barrier-14” is designed to identify the addiction to alcohol and drugs, as well as assess their susceptibility to corruption and suicide. If something like this is fixed, the officer will be removed from working with nuclear weapons until the reasons are clarified. But so far no critical inclinations have been observed among the rocket men.

A total of 16 rocket troops for testing. Each of them includes: a special chair, a laptop with a bundle of wires connected to it, to which various sensors are attached. There is even one on which the test will have to sit - a tremor-pillow, which will not lie, sensitively reacting to the reduction of the muscles of the legs and buttocks. The cost of such a set is 200 thousand rubles.

“A polygraph test is voluntary,” Colonel Andrei Filatov, Assistant Commander of the Strategic Missile Forces for educational work, told Izvestia. - But in case of refusal to pass it with the soldier, an explanatory conversation will be held. We have enough other methods to determine the motivation of those or other decisions of the serviceman.

Before testing, the soldier signs a consensus document, which defines the range of questions that the officer is ready to answer. For example, an officer may refuse to discuss his family relationships, religious beliefs, sexual orientation, and even the experience of working with Russian special services on a polygraph. After this, testing begins, which, depending on the responses received, can last up to several hours, Filatov told Izvestia.

First in the Ministry of Defense, the practice of checking personnel on “lie detectors” was introduced in the 12 General Directorate - the structure responsible for transporting and storing nuclear ammunition. RVSN were second. In the future, the practice of testing on a “lie detector” may become commonplace in other departments and the main commanders of the military department. Especially those associated with the procurement of material resources, equipment and machinery.

As of the end of 2010, the Strategic Missile Forces had 375 missiles of four different types capable of carrying 1259 nuclear warheads. The Strategic Rocket Forces are developing new rocket technology - Topol-M mobile complexes, as well as the new RS-24 Yars. The consequence of this was the growing demands for both professional and moral-psychological training of officers.

We are in Yandex Zen
December 17 - RVSN Day
December 17 - Strategic Missile Forces Day
6 comments
Information
Dear reader, to leave comments on the publication, you must to register.