1597 Silicon Revolver of the Year 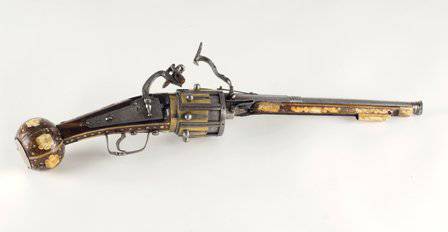 Long before the advent of the Colt's revolvers, at the end of the 16 century, gunsmiths in Europe began to make the first revolvers. Structurally, they were quite primitive, with flint locks of early design, had no mechanism of rotation of the drum. However, the use of a drum made it possible to create multiply charged weapon, which significantly increased its firepower. Flint revolvers were very expensive and only wealthy people and prominent warlords became their owners.

To date, it is believed that the first short-barreled weapon with a drum and flint ignition mechanism was manufactured in the 1597 year. 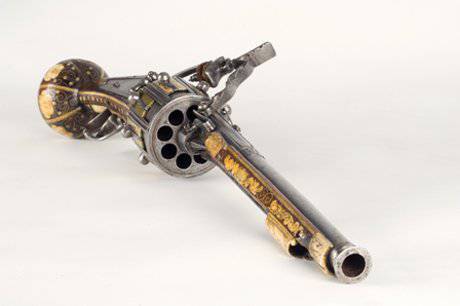 This revolver belonged to Georg Reishwein (1593 — 1667). Georg Reichwein arrived from Hesse (in Germany) in Norway in the 1628 year. This year, the king of Norway Christian IV hired several officers from Germany and the Netherlands to strengthen the Danish-Norwegian army during the 30-year war (1618 - 1648 of the year). 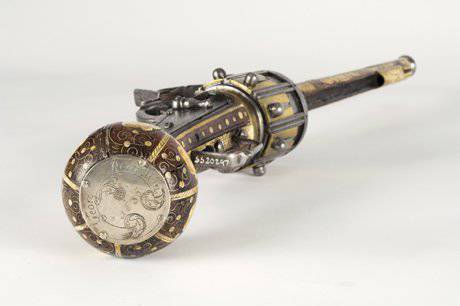 In 1636, Georg Reischwein was promoted to major and was appointed commander of the military forces of the Bergenhus fortress. One can only guess in honor of this event whether he ordered a silver plaque with his name and a year on a revolver, or simply because he bought a weapon this year. 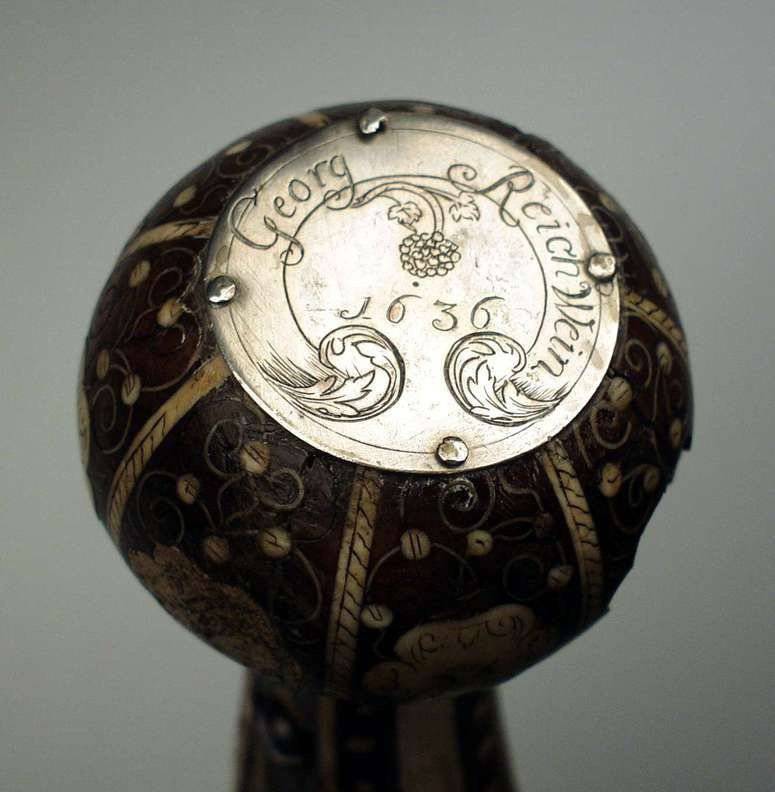 At the bottom of the handle, on the “apple” there is a round silver plate with the image of a grape bunch, branches of a vine and the letter text “Georg Reichwein 1636”. In 1667, Reishwein died as a general and traces of a revolver are lost for several decades. In 1834, the flint revolver was brought by a merchant Thales Schou in Oslo, where he was sold to a university collection. In 1919, weapons were exchanged between the collections in the museum of the city of Lillehammer.

The revolver consists of a bed with a tip in the form of an "apple", a barrel, a flintlock, a trigger mechanism and a drum. An early type revolver flint lock with a split fire and a powder shelf lid, the so-called Snapplock. The keypad is installed on the right side of the box. Flint with podvinivnoy spring placed on the right above the breech.

The trigger is protected by a steel trigger guard. The barrel of a pistol is cylindrical, expanding towards the breech and thickening at the muzzle end. The flint revolver is richly decorated. Inlays of brass, bone, mother of pearl, pearls cover the bed, intertwined in intricate patterns. 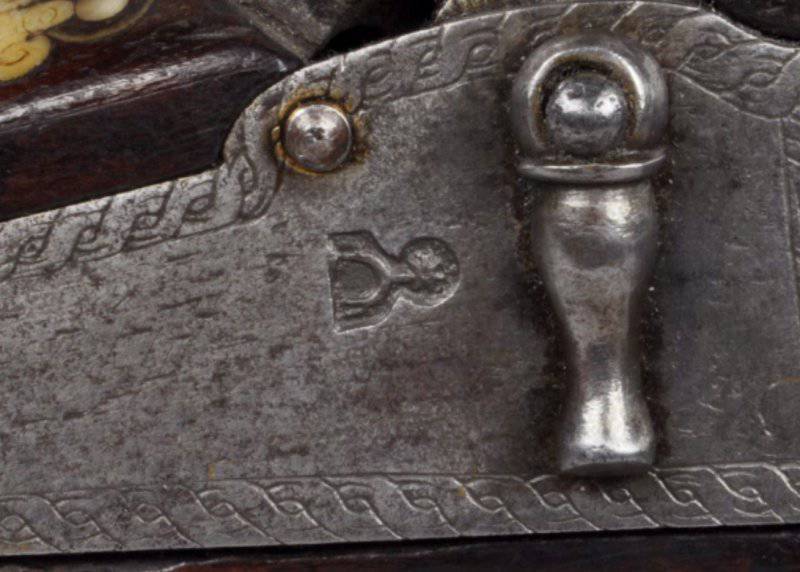 On the right side of the revolver on the keypad there is a mark in the form of a spur that allows you to determine the year of the revolver - 1597. The stamp belongs to the German blacksmith and gunsmith from Nuremberg Hans Stopler (Hans Stopler). 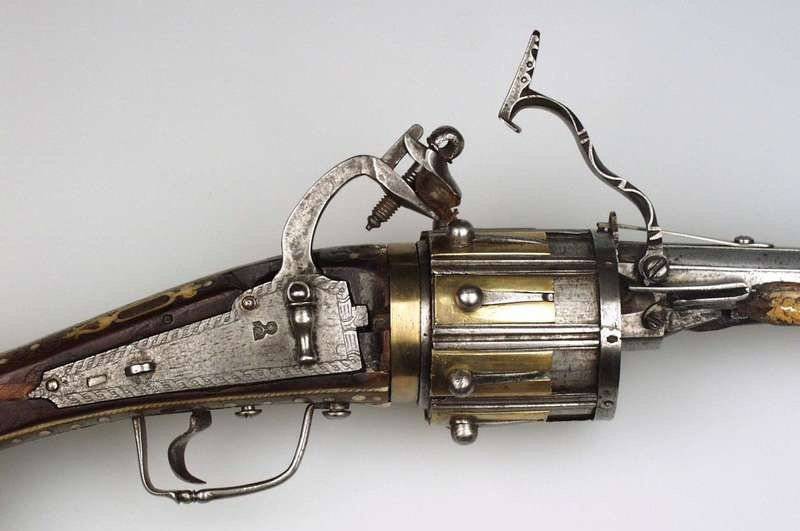 The drum of the revolver is made of steel and has a cylindrical shape. The chambers of the revolver drum have brass spring-loaded caps mounted on the side surface of the drum. Covers are equipped with hemispherical handles. Powder shelves with seed powder are located under the covers. 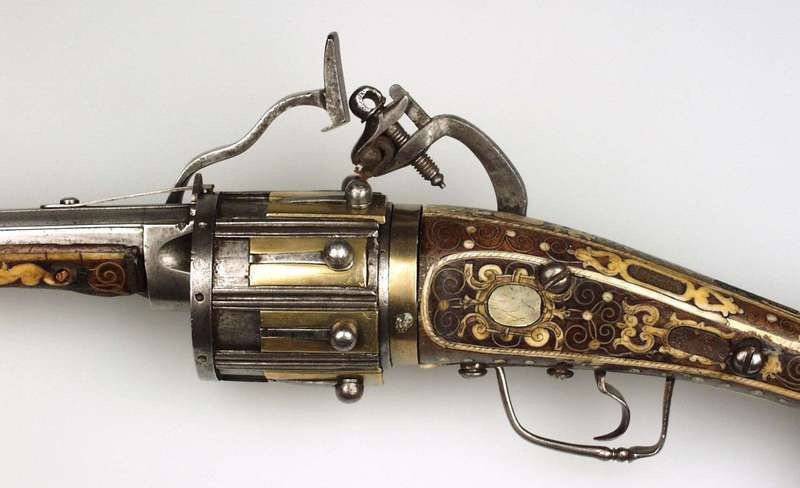 Rotation of the drum is carried out manually. The fixed position of the drum chamber relative to the barrel bore is achieved by a spring plate with a protrusion located in the upper breech block. The locking protrusion of the plate, after rotating the drum, enters the corresponding recesses on the side surface of the drum and prevents its further independent rotation. 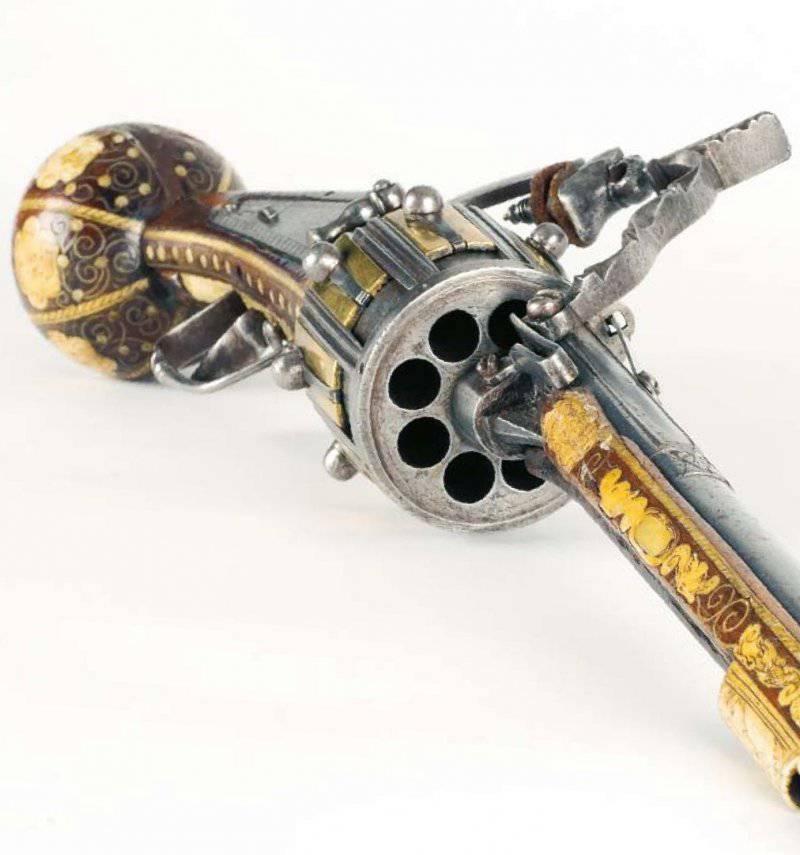 The drum of a flint revolver has eight chambers in which charges with bullets are stacked. To prevent the ignition of the powder charges of the neighboring chamber, the collar of the chamber was smeared with wax or lard. 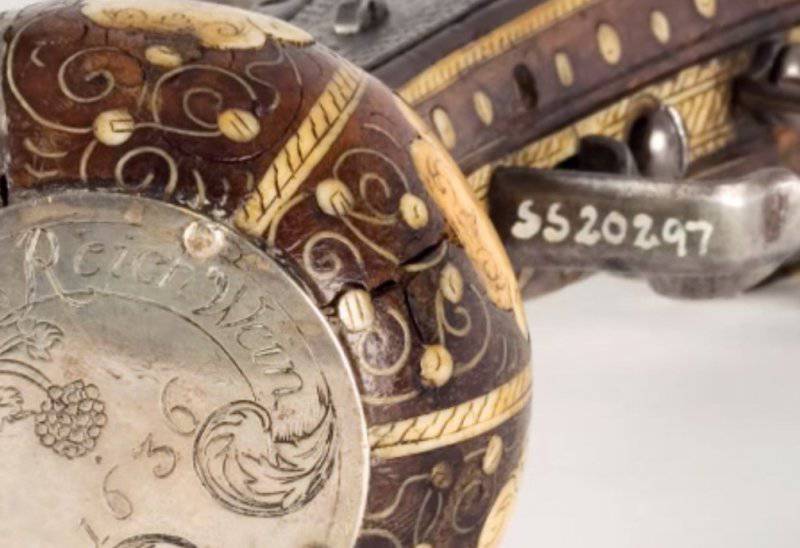 Currently, Hans Stopler's revolver under the SS20297 accession number is stored in the collection of the Norwegian Maihaugen Museum in Lillehammer.