Anti-terrorism exercises with the participation of Russia, Canada and the United States begin in Petropavlovsk-Kamchatsky 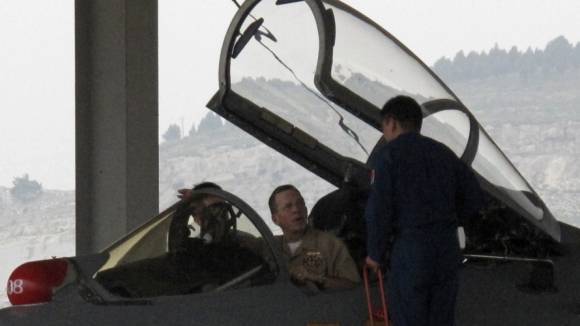 From 8 to 11 in August, the Russian and American military will hold a three-day joint Vigilant Eagle drills to counter air terrorism.


According to Izvestia, at the headquarters of the Russian Air Force, according to the scenario of the “terrorists seize” exercises, two aircraft — Boeing-757, flying from Anchorage to Tokyo, and Il-62, moving from Petropavlovsk-Kamchatsky to Anadyr — all at once.

Both aircraft, like Boeing 747 in 1983, do not respond to the call of dispatchers and change the original route in an attempt to get out of their country's airspace.

In order to reason with the violators, the Russian Air Force and the North American Aerospace Defense Command (NORAD) will fly fighters into the air and send interceptors patrolling the countries' air borders to violators.

- The fighter must intercept the target. Maneuver or fire their weapons to land. If this does not work, then, in my opinion, you need to go on about the terrorists and fulfill all their requirements. Escort to the landing site and already understand on the ground, without endangering innocent passengers, ”the marshal told Izvestia aviation Evgeny Shaposhnikov.

On the Russian side, five Su-27 fighters and two A-50 radar patrol and guidance aircraft, which have already arrived at the military airfield in Petropavlovsk-Kamchatsky, will be involved in the exercises. Americans and Canadians plan to use interceptors F-15 and aircraft communications AWACS E-3B.

The teaching will consist of two stages. At the first stage, the American "Boeing" will "violate" the air border of Russia, at the second stage, the Russian "Il" - the American one.

It is curious that the first scenario almost completely repeats the real situation that occurred 1 September 1983 of the year with the South Korean Boeing 747 flying from Anchorage to Seoul. Then the passenger liner deviated from the permitted route and entered the airspace of the USSR.

The Boeing crew did not react to the signals of the Soviet ground services. The supersonic Su-15 fighter, pilot Gennady Osipovich, was raised to intercept him. Released them on the violator of the state border of the rocket hit the tail and wing of the passenger liner. The car fell into the ocean from a height 11 thousand. Km. 269 people died.

According to Marshal Shaposhnikov, today the repetition of the 1983 script of the year in real life is unlikely.

- Then the Soviet Union considered the South Korean Boeing not only as a plane violating the state border, but primarily as an air spy. Today, there is interaction between Russia and the United States to avoid extreme measures, says Shaposhnikov.

These are the second exercises of the Russian Air Force and NORAD with the aim of supporting efforts to strengthen cooperation in the field of air safety. In addition to the military, the relevant civilian agencies of Russia (Rosaviatsia) and the USA (Federal Aviation Administration) are involved in them, which should ensure the development of interaction between aviation authorities at all levels in case of emergency situations with passenger aircraft in the area.

Ctrl Enter
Noticed oshЫbku Highlight text and press. Ctrl + Enter
We are
Today started the international exercise "Watchful Eagle-2012"Russian military will take part in anti-terrorism exercises in the US
8 comments
Information
Dear reader, to leave comments on the publication, you must to register.